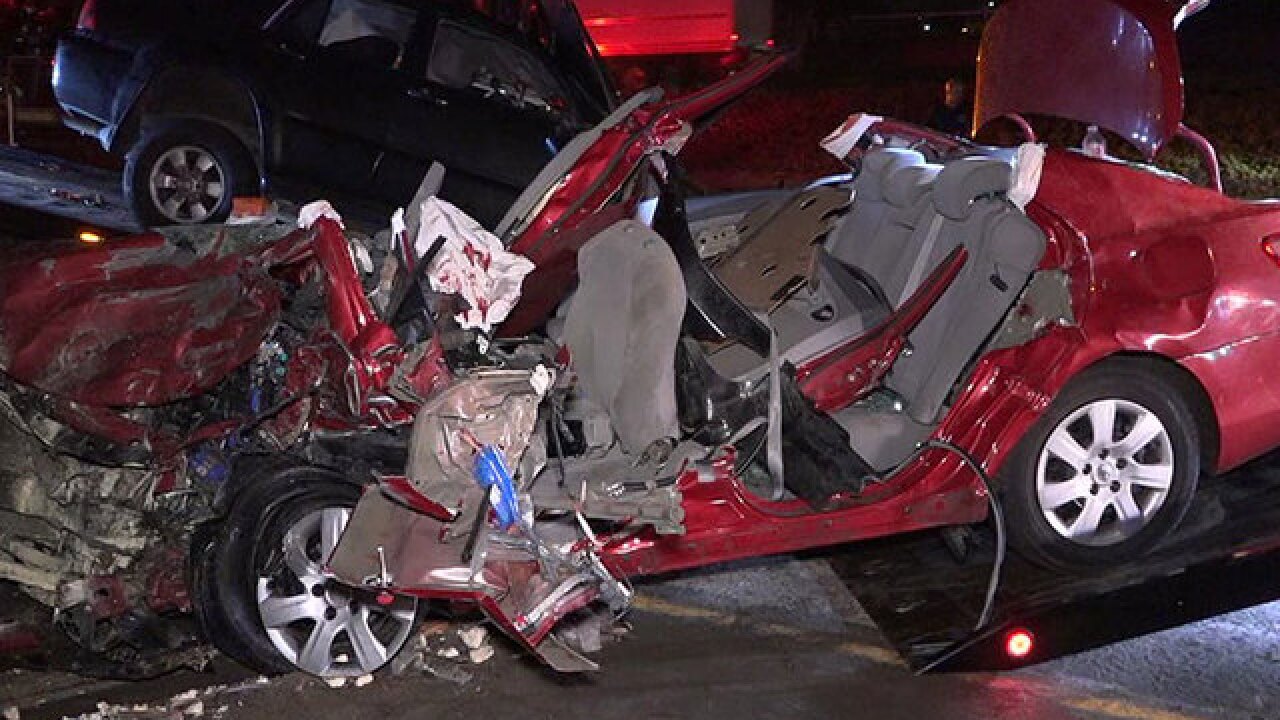 SAN DIEGO (KGTV) - When it comes to wrong-way crashes in San Diego County, 2018 is off to an unfortunate start.

There have been numerous wrong-way vehicle crashes around the county nearly eight weeks into the new year, and authorities have not been able to pinpoint what exactly is causing an uptick in these types of crashes.

According to Caltrans data, from 1995-2012, an average of 23 people died each year in wrong-way crashes on California roadways.

In 2017, Caltrans launched a two-year pilot program in San Diego and Sacramento that focuses on ways to not only prevent wrong-way crashes but to also alert authorities in the event a vehicle is traveling in the wrong direction.

As part of the test program, Caltrans has deployed reflective pavement markings on off-ramps and signs with flashing lights that turn on if a wrong-way vehicle is detected.

Caltrans has not yet provided data collected from the program to determine the protective measures' effectiveness.

Here's a look at wrong-way crashes on San Diego County roadways in the past 12 months.

Feb. 20, 2018: Driver arrested on suspicion of DUI after wrong-way crash
-- A driver was hospitalized -- and also arrested -- after police said he was driving in the wrong direction on Fairmount Ave. when he hit another vehicle. STORY

Feb. 18, 2018: One dead, five injured in crash at Scripps Ranch
-- A 90-year-old woman died and five others were injured after a head-on collision at a Scripps Ranch intersection. STORY

Feb. 17, 2018: At least 1 dead in possible head-on crash in Sorrento Valley
-- The driver of a Honda driving the wrong way was killed after colliding head-on with a truck on I-5 near Sorrento Valley Road. STORY

Jan. 29, 2018: Injuries reported in wrong-way crash on Interstate 5
-- A driver traveling the wrong way on I-5 in the National City area crashed into another vehicle, injuring two children. STORY

Dec. 18, 2017: 2 drivers injured in Tierrasanta wrong-way crash
-- A PT Cruiser traveling the wrong way on Tierrasanta Blvd. crashed into a pickup truck, leading to injuries to both drivers. STORY

Oct. 14, 2017: Driver dies after head-on collision in Escondido
-- One person was killed after police said a Saturn veered into the opposite lanes and collided head-on with a Toyota. STORY

July 8, 2017: One dead in wrong-way I-5 collision in National City
-- Two vehicles collided on I-5 in the National City area, killing one person and leaving both vehicles in flames. STORY

July 7, 2017: 2 killed in wrong-way crash on Interstate 5 in Oceanside
-- A Toyota Camry driving the wrong way on I-5 crashed head-on into a Toyota SUV. Both drivers died at the scene, the CHP said. STORY

June 27, 2017: Valley Center head-on collision leaves two dead
-- An SUV crossed over the double line on Lilac Road and crashed into a Mercedes, killing two of its occupants. STORY

June 19, 2017: 1 dead, 1 injured after wrong-way head-on crash in Fallbrook
-- Authorities say a Honda was going in the wrong direction at a high rate of speed on Via Encinos Drive when it collided with a van. STORY

May 5, 2017: 1 dead, 2 hurt in head-on collision in El Cajon
-- A man was killed and two others were injured after a collision on Avocado Avenue. STORY

March 27, 2017: Wrong-way driver crashes on Coronado Bridge, prompts lane closures
-- A suspected DUI driver was driving the wrong way on the Coronado Bridge when she crashed into two other vehicles. STORY