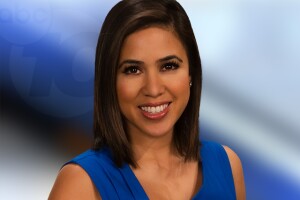 Vanessa Paz is ecstatic to join the ABC 10News team as the newest morning traffic anchor and reporter. Born and raised in Chula Vista, a Hilltop High alum, it is truly a homecoming for her. After high school, Vanessa attended Cal State LA where she received her bachelor's in Broadcast Journalism and is currently wrapping up the Meterology degree program at Mississippi State.

Before arriving back in San Diego, Vanessa served the Pacific Northwest for nearly a decade at stations stretching from Eugene to Portland, Oregon. Most recently, Vanessa was the morning traffic reporter and weekend weather anchor for Portland's NBC affiliate, KGW news. There, she covered everything from major crashes and closures, to local weather systems spanning from the Cascades to the Coast.

Before KGW, Vanessa worked with Portland's Fox affiliate, KPTV, where she was a night side reporter. Covering the Portland metro area and it's surrounding neighborhoods, she reported on a variety of topics such as community-wide issues and protests, to national guests including politician Bernie Sanders' visit to the Moda Center.

Vanessa's career started in Eugene, Oregon where she worked for two local stations including KVAL and KMTR news. In Eugene was where Vanessa was able to grasp all newsroom duties while producing, writing, editing, shooting and filling in as anchor and weather reporter.

In her free time, Vanessa enjoys heated sculpt and yoga workouts but will always take advantage of San Diego's sunshine with a run outdoors in her Chula Vista neighborhood. Although she has close ties to many people in Chula Vista, she is excited to expand that circle while getting to know others in the San Diego community.

Traffic alerts or news tips? Please email her at Vanessa.Paz@10news.com, and if you see her at your local coffee shop or store, please don't hesitate to say hello!