'I got this': Gianna Bryant wanted to carry on basketball legacy of her famous father Kobe Bryant 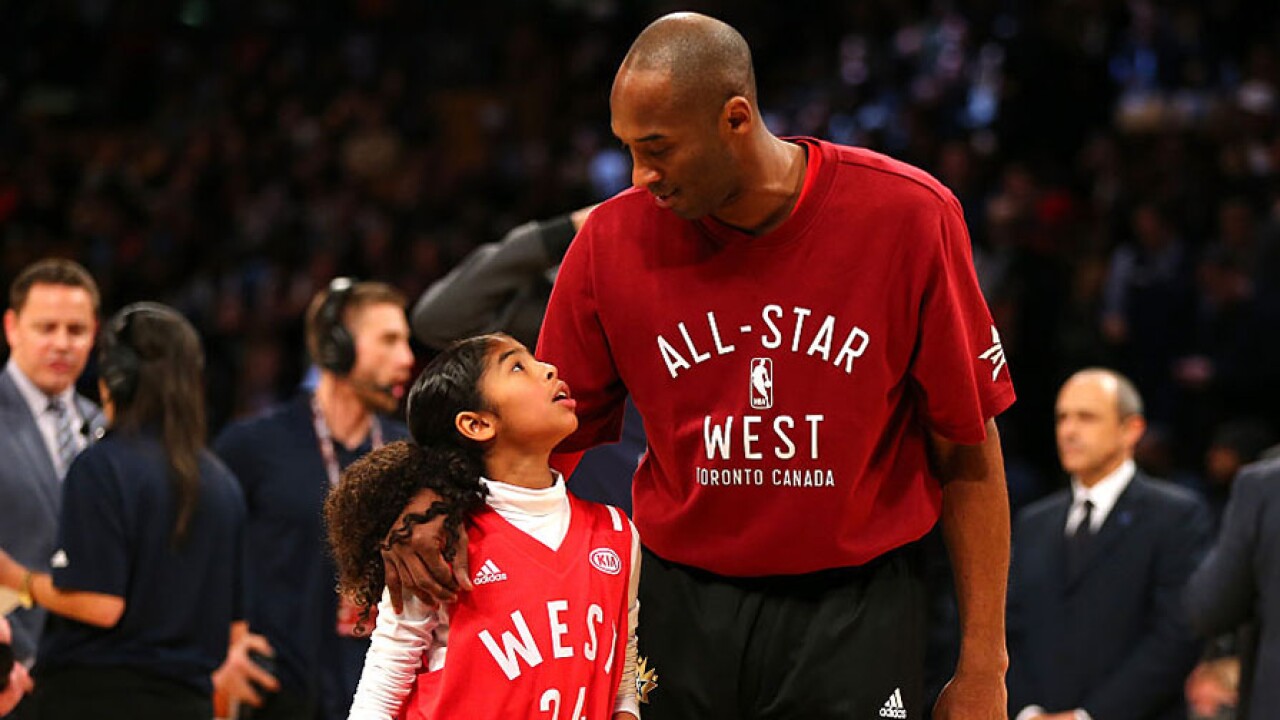 Elsa/Getty Images
Kobe Bryant #24 of the Los Angeles Lakers and the Western Conference warms up with daughter Gianna Bryant during the NBA All-Star Game 2016 at the Air Canada Centre on February 14, 2016 in Toronto, Ontario.

(KGTV) -- The Southern California helicopter crash that abruptly ended the life of basketball legend Kobe Bryant also claimed the lives of eight others, including the Lakers star’s 13-year-old daughter Gianna.

According to published reports, the helicopter was on its way to a game at Bryant’s Mamba Sports Academy in Thousand Oaks when it went down in the Calabasas area on the morning of Jan. 26.

The 41-year-old Bryant was supposed to coach his daughter’s team later in the afternoon.

Gianna “Gigi” Bryant was quickly coming into her own as a basketball player, showing the hoops world and social media that she possessed a skillset and fierce determination on the court that was almost similar to her famous father’s.

Kobe Bryant had four daughters, but it was Gianna -- the second oldest -- that he described to the Los Angeles Times as “something else” when it came to having game on the hardwood.

Bryant told the Times in the 2019 interview that Gianna was “hell-bent” on playing at perennial woman’s college basketball powerhouse Connecticut and going on to the WNBA to carry on the Mamba’s basketball legacy.

Kobe and Gianna’s love for the game's nuances was evident during a December 2019 NBA game in Brooklyn.

TV cameras captured father and daughter sitting courtside, with Bryant appearing to walk Gianna through what was happening on the floor. Gianna was intently listening as her father pointed something out and gave a smile before the clip ends.

This is all I can think about right now. pic.twitter.com/9UbHvFLq5w

In a 2018 interview on “Jimmy Kimmel Live,” Bryant said of Gianna, “The best thing that happens is when we go out, and fans will come up to me and she’ll be standing next to me and they'll be like, 'You gotta have a boy. You and V (Bryant's wife Vanessa) gotta have a boy, have somebody carry on the tradition, the legacy.' She's like, 'Oy, I got this. No boy for that, I got this.'"

I hate seeing my #teammamba girls play against each other. This is GREAT defense by our mamba pg Alyssa Altobelli and a familiar looking fade by our 2gd the #Mambacita

@wnba finals rematch got us hype! A lil one on one with my baby Gigi #footwork #stringmusic #mambacita