The Mayor's Office is working on an emergency ordinance banning electric scooters, like those used from services such as LimeBike or Bird, from the Mission Beach Boardwalk, from Crystal Pier south to the jetty.

SAN DIEGO (KGTV) - Mission Beach residents and tourists could be getting some relief from dockless scooters speeding down the boardwalk as San Diego's summer season approaches.

The Mayor's Office is working on an emergency ordinance banning electric scooters, like those used from services such as LimeBike or Bird, from the Mission Beach Boardwalk, from Crystal Pier south to the jetty.

"Residents have complained about [the] continued reckless use of motorized (electric) scooters along the Mission Beach Boardwalk. This type of behavior has resulted in collisions, accidents, and bodily injuries," the city said in a release.

San Diego Police Department says they have written 182 citations for scooter riders without helmets, 27 tickets for riding on the sidewalk, and 43 warnings for going over the 8 mph speed limit.

Zapf sent a memo to Mayor Kevin Faulconer's office last month asking for help with the influx of scooter use. The Mayor's Office plans to propose the ordinance to the City Council on May 22.

Zapf's district covers areas that have seen an influx of dockless bike and scooter use over the past few months, including Pacific Beach, Mission Beach, Ocean Beach, and Point Loma.

Since locals and tourists have started using the dockless transportation around the city and along the coast, services have cropped up across the county.

“Since Bird launched here in January, the people San Diego have truly embraced us as a convenient, environmentally friendly way to get around. In our productive conversations with the city, we all agree about the importance of protecting the public right of way from all vehicles -- cars, bikes, and Birds. We are optimistic that we can collaborate with San Diego officials to build a framework that permits more transportation options that help the city meet its ambitious goals to reduce its carbon footprint by 40 percent by 2030.

To begin addressing the concerns raised by city officials, Bird is in the process of hiring Safety Ambassadors to educate the community about proper riding and parking habits.

As we continue this dialogue with the city, we at Bird will continue to abide by our Save Our Sidewalks Pledge, which includes collecting all vehicles each evening, growing responsibly, and remitting $1 per vehicle per day to city governments so they can build more bike lanes, promote safe riding, and maintain our shared infrastructure.”

We asked 10News viewers in March what they thought about dockless bike and scooter companies rolling into San Diego. Out of more than 700 responses, the majority said they thought the bikes were becoming a nuisance: 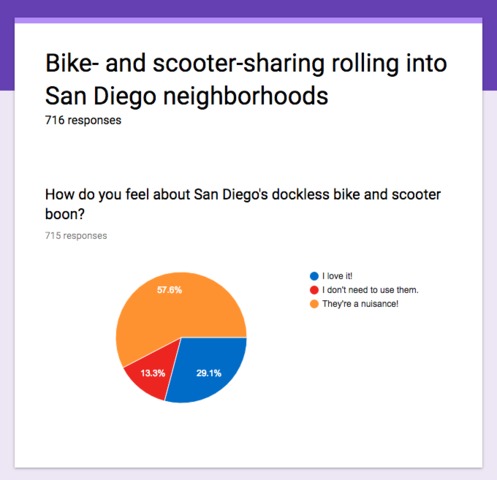