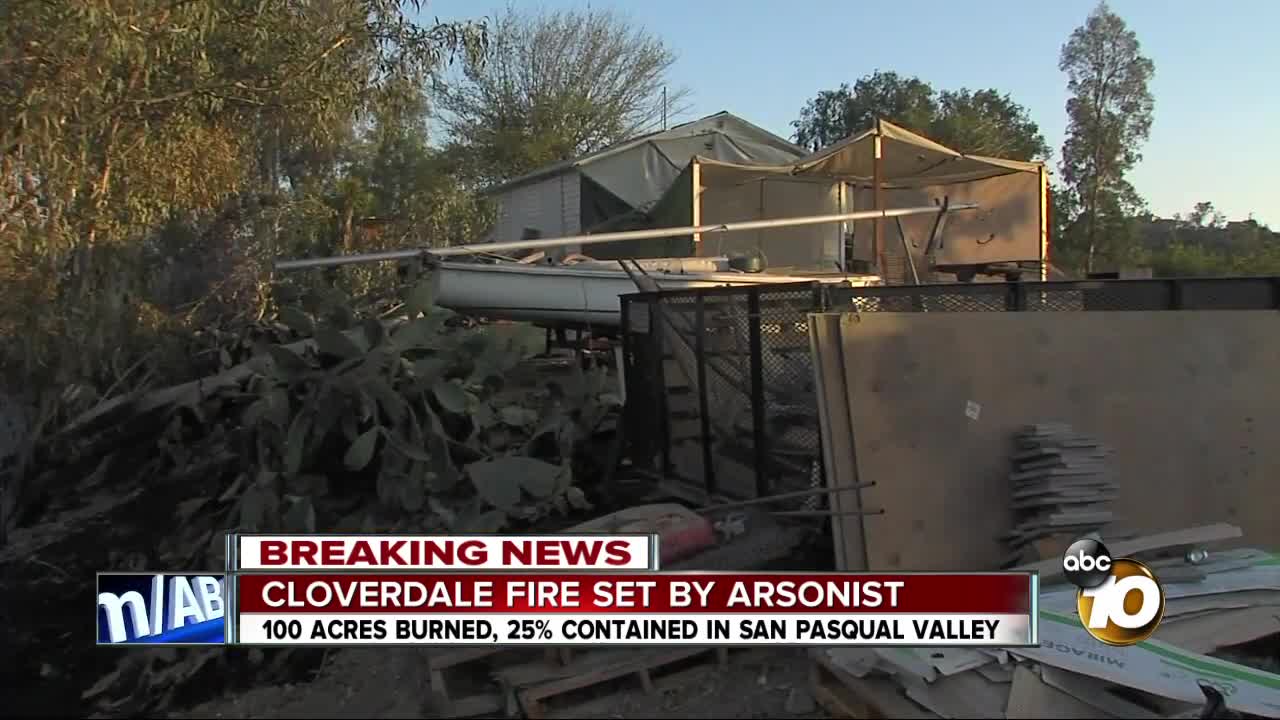 "The biggest crop we've had for years is firewood," said Mark Linshield Lineshield through tears. "And that's what's burning down there right now. So...that's a total loss." Fire crews Monday stopped the forward rate of spread of a brush fire in the San Pasqual Valley.  The blaze, dubbed the Cloverdale Fire, burned 100 acres and is, as of 7 p.m. Monday, 15 percent contained. 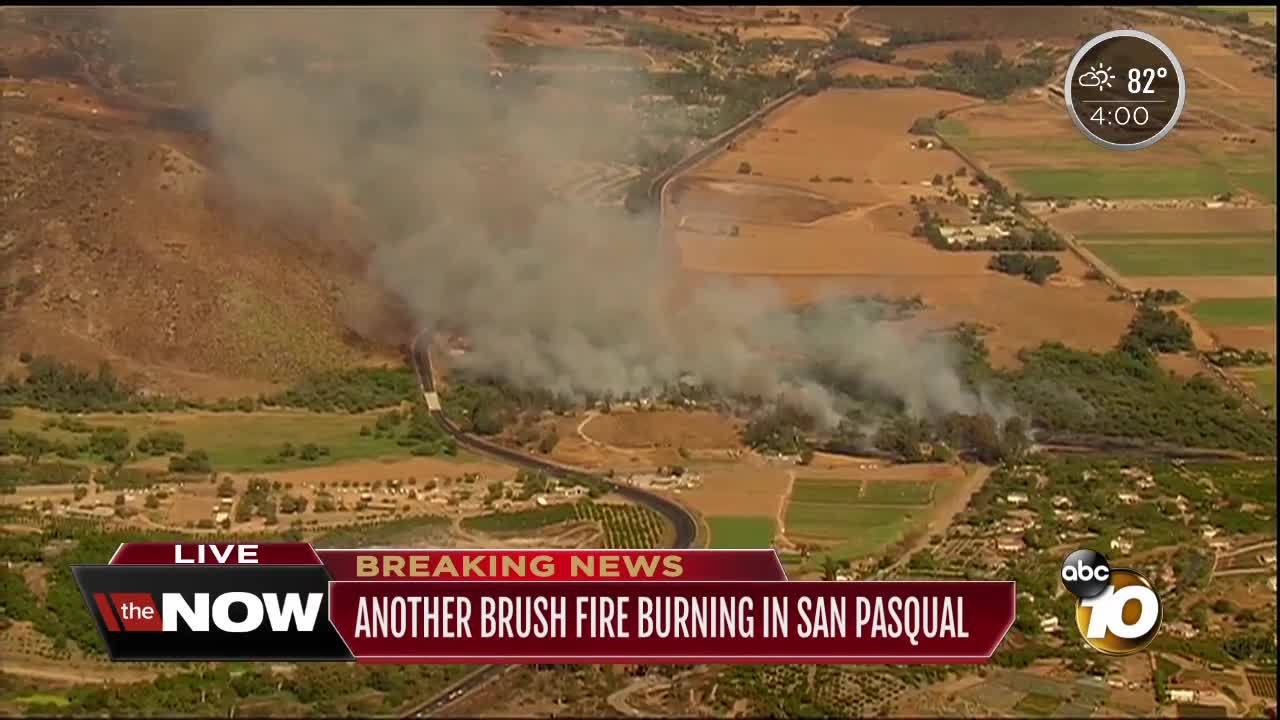 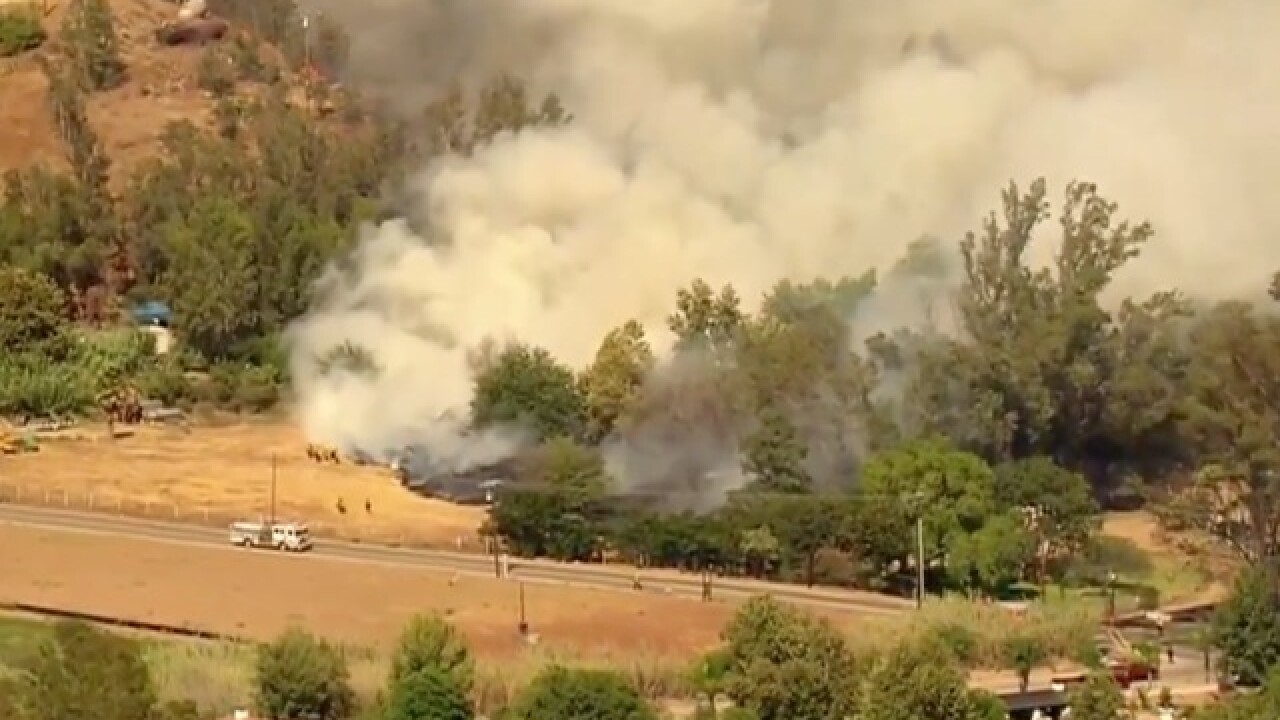 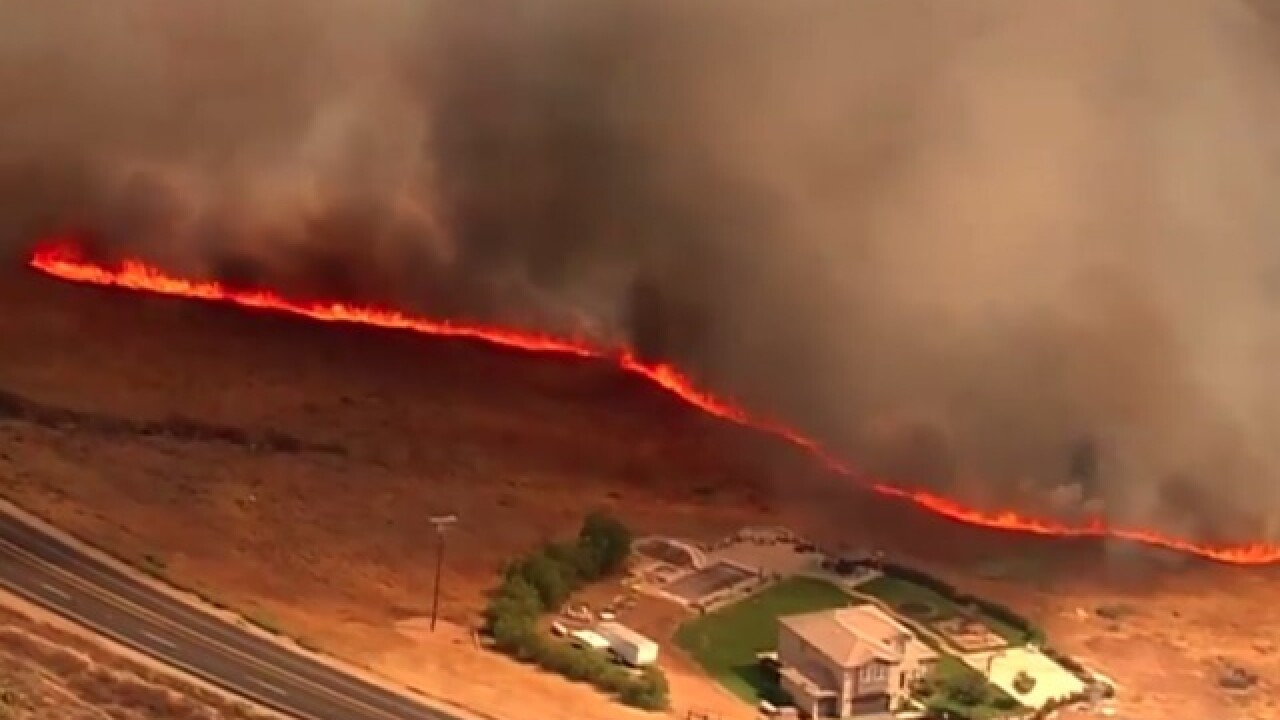 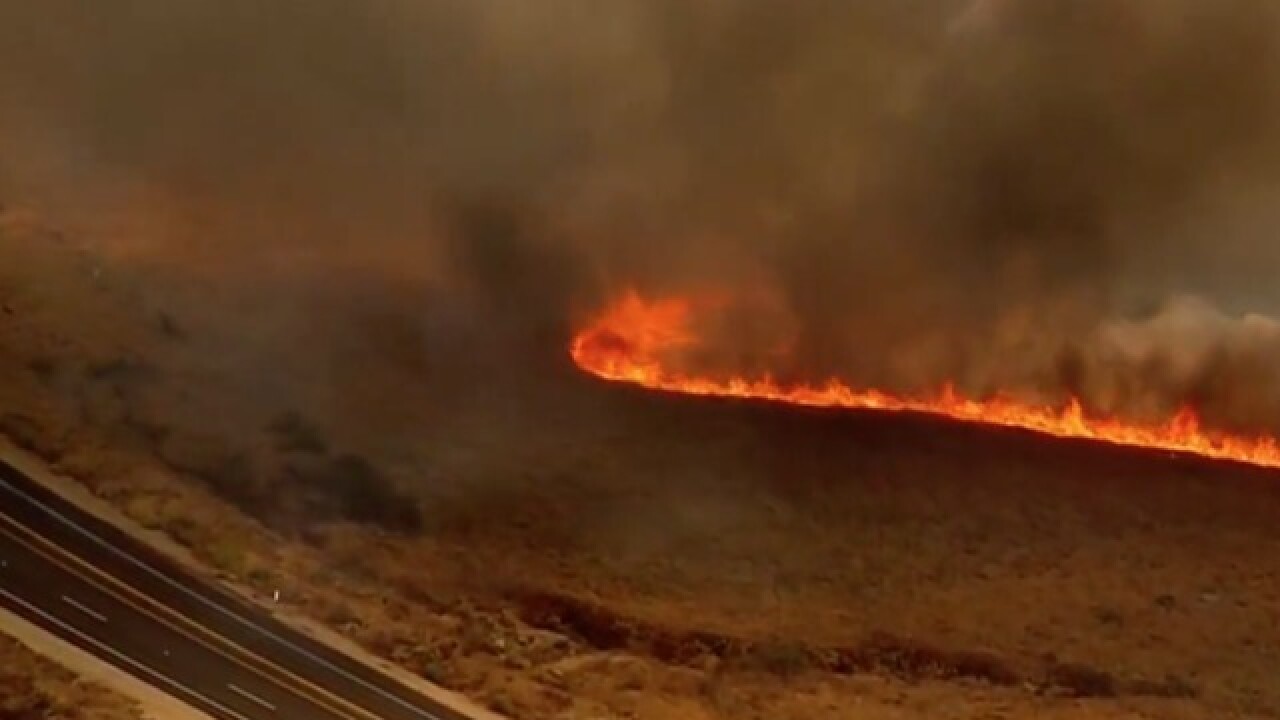 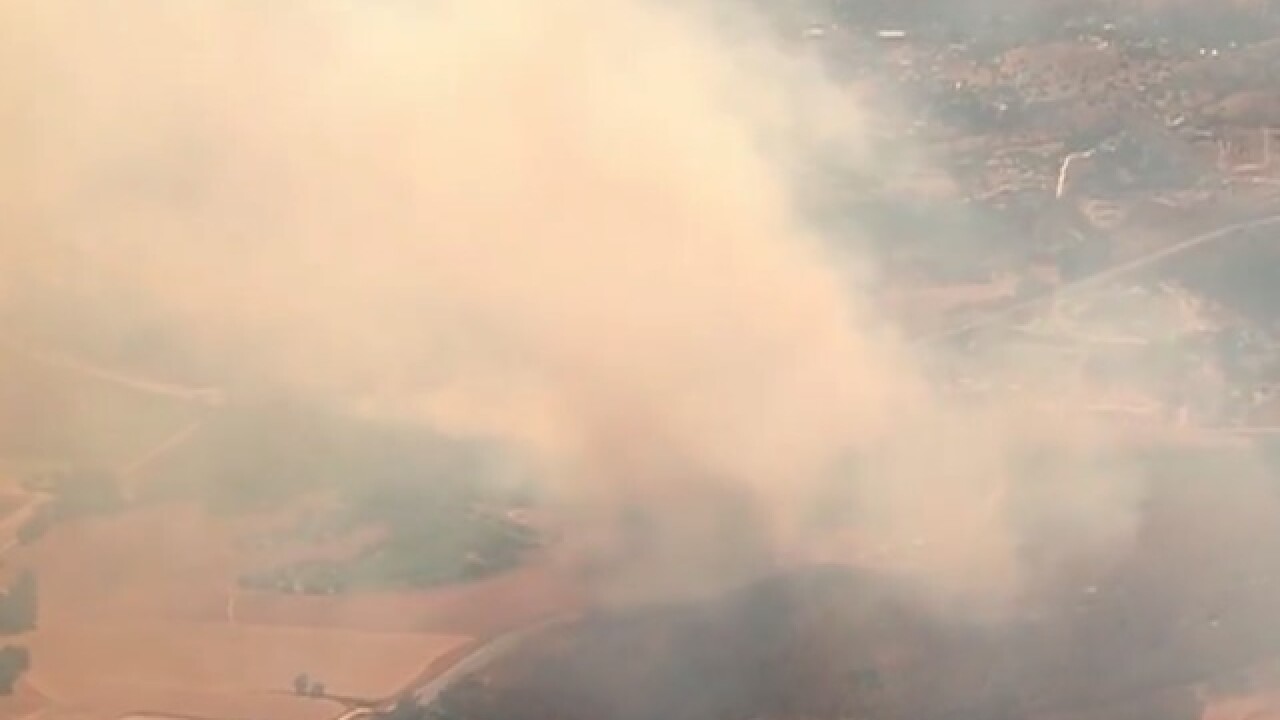 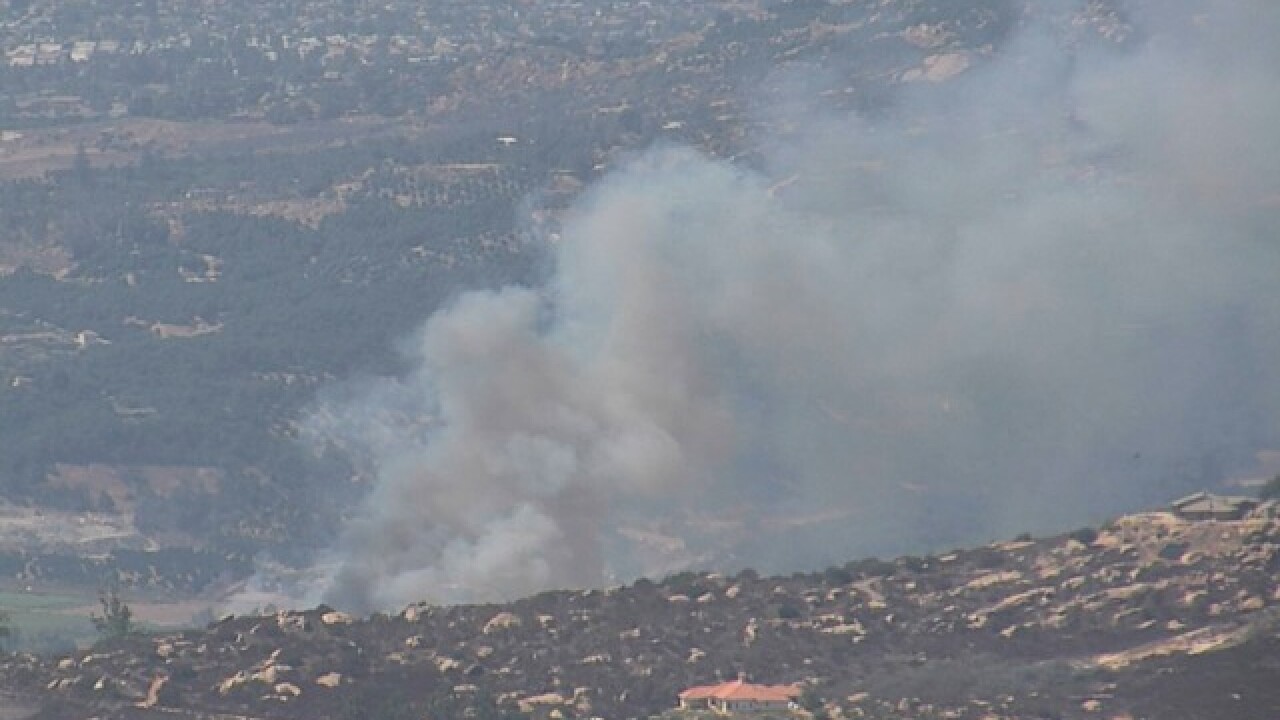 The blaze, dubbed the Cloverdale Fire, burned 100 acres and is, as of 7 p.m. Monday, 15 percent contained.

The fire broke out on the 21000 block of San Pasqual Road around 3 p.m. near Hungry Hawk Vineyards.

A San Diego firefighter suffered a minor injury and was treated at the scene.

The Cloverdale Fire in the San Pasqual Valley started a few minutes before 3 p.m. today. @calfiresandiego @poway_firefighters @sdsheriff @sandiegopd @theescondidofirefighters all worked together and the Fire currently (7 p.m.) stands at 100 acres and 15% containment. The forward rate of spread has been stopped. One firefighter suffered a minor injury and was treated at the scene. The SD Fire-Rescue metro arson strike team investigators determined that today’s fire was deliberately set. #sandiego #sdfd #cloverdalefire #brushfire #firefighters #calfire #teamwork #strongwork @joinsdfd

Evacuation warnings were issued for part of San Pasqual Road, Rockwood Road and Brillwood Hill Road. The San Pasqual High School opened for those who evacuated.

All lanes of SR-78 east of Safari Park and Cloverdale Road also had to be shut down due to the blaze.

The San Diego Zoo Safari Park, which is located roughly five minutes away from where the fire started, evacuated guests Monday afternoon due to the closure of SR-78. The park was also prepared to evacuate animals, but did not have to do so.

San Diego Safari Park closed early because of #CloverdaleFire . Zoo made the call so hundreds of people could get to their cars and out of the area before firefighters closed Highway 78. No evacuation preps for animals at this point @10News pic.twitter.com/oI2dIpPQQA

In an evening update, the Safari Park announced that it would be open as usual to guests on Tuesday. Highway 78 is expected to be open in both directions by early morning.

The National Weather Service tweeted out a photo of the blaze when it first started as seen from the NWS office.

The fire seen from our office is the #PasqualFire. CHP states fire is spreading quickly. For a live webcam view, check out SDG&E's camera: https://t.co/W2XqMQaPkV pic.twitter.com/3arKaLcqEL

The SDG&E aircrane was also dispatched to the blaze to help firefighters battle the Cloverdale Fire. Along with the aircrane, three helicopters and two fixed-wing aircraft were sent to fight the fire.

The blaze comes just days after the Rangeland Fire scorched 250 acres on the same hillside already blackened by the Pasqual Fire that tore through the area in late July.