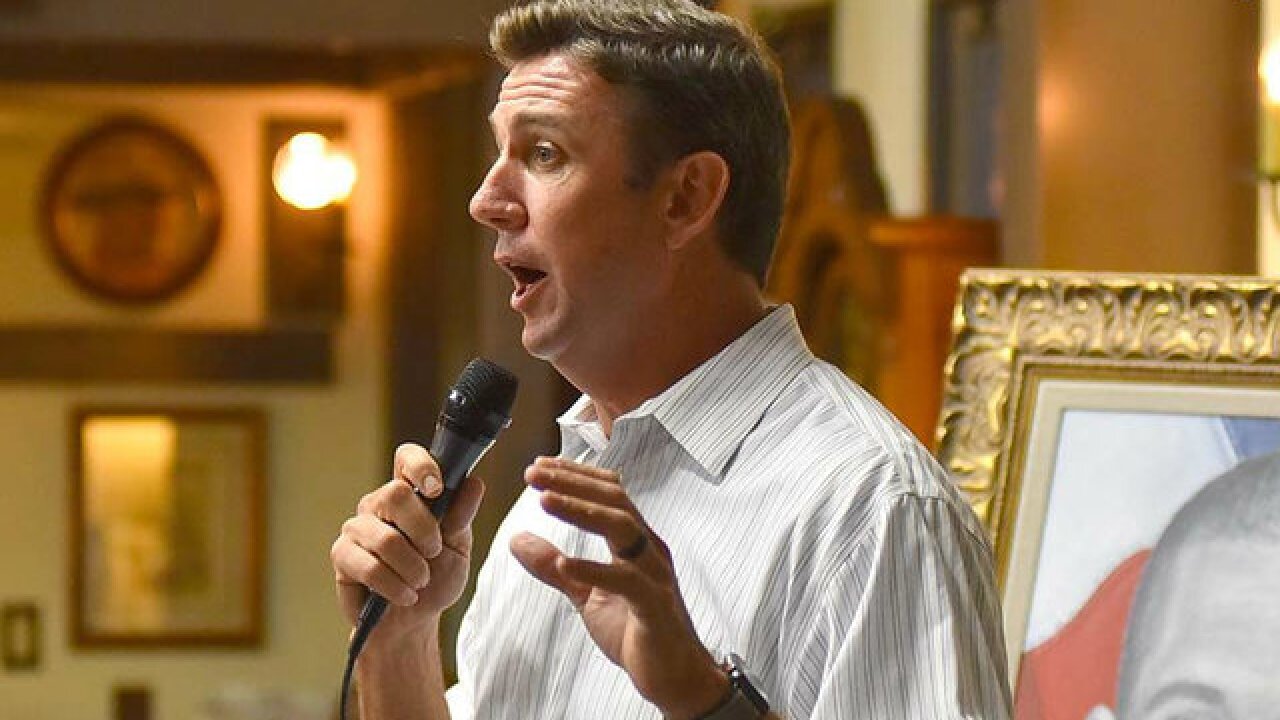 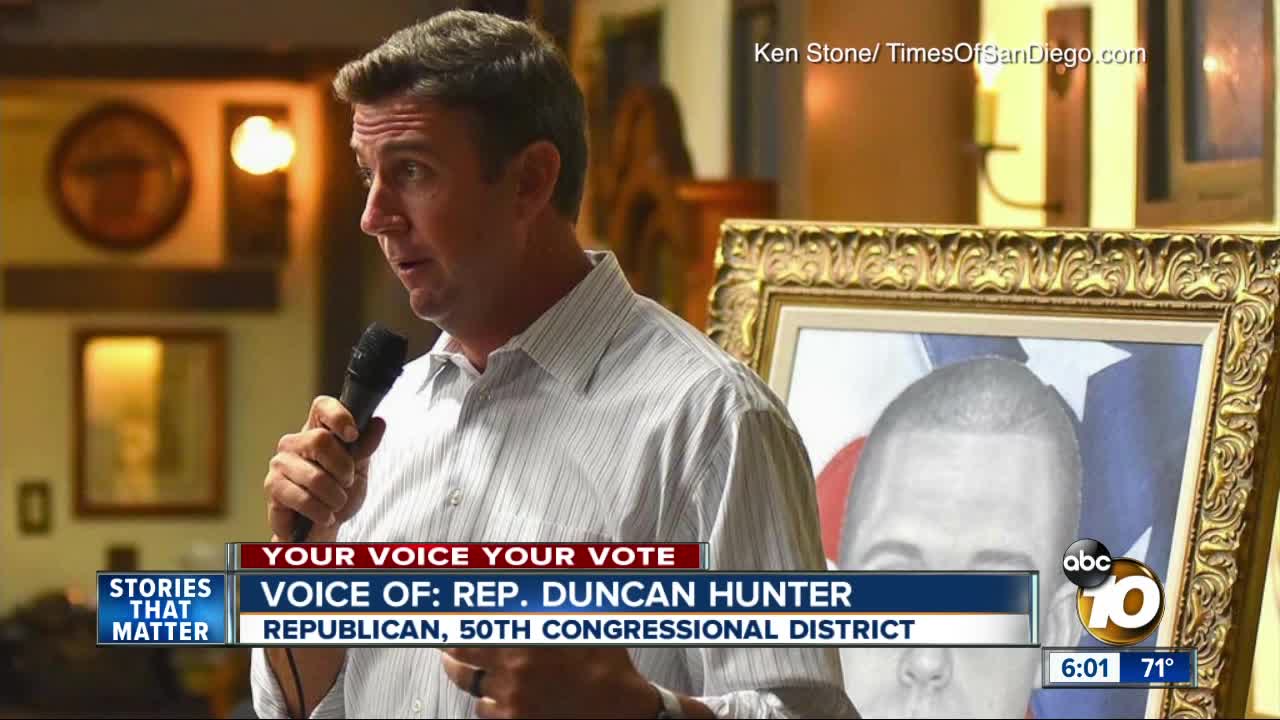 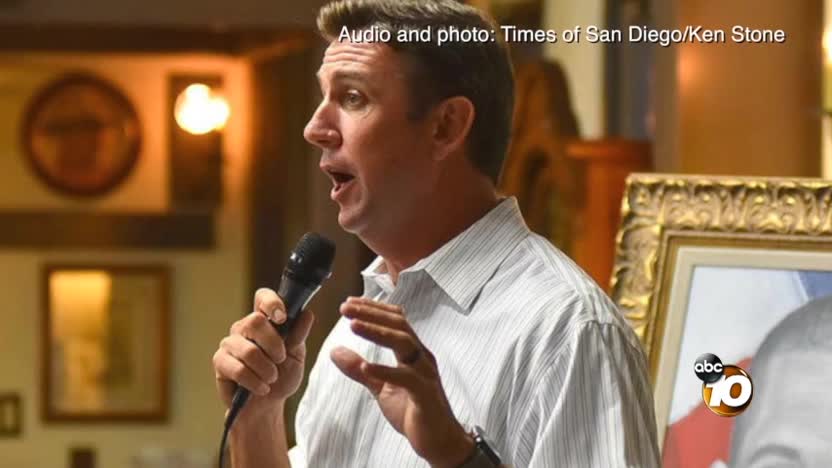 SAN DIEGO (KGTV) - Speaking before a crowd of supporters in Ramona Monday, a fired-up Rep. Duncan Hunter continued to back President Trump’s policies, blasted those who are trying to bring the president down and suggested his Democratic opponent is an "Islamist" that is part of an effort to infiltrate the U.S. government.

The 50th District Republican congressman spoke at an event to honor military veterans several hours after he and his wife appeared in a San Diego courtroom as part of the campaign funding misuse case against them.

The Hunters face accusations of spending more than $250,000 in campaign funds on personal expenses. Hunter and his wife Margaret have pleaded not guilty to the federal charges.

Ken Stone of Times of San Diego reported Hunter touched on numerous topics during his appearance, including his congressional opponent, the border wall and a political “coup” that is attempting to undermine Trump.

On the Justice Department:
Asked if Attorney General Jeff Sessions should be fired after the November midterm elections, Hunter said, “He better be.” The congressman also labeled the Justice Department as “corrupt” and said Deputy Attorney General Rod Rosenstein’s alleged wire and 25th Amendment remarks are part of a “coup” that he believes has “been going on since before he [Trump] was even elected. Because they lost.”

On opponent Ammar Campa-Najjar:
Hunter said his Democratic opponent changed his name from Ammar Yasser Najjar to Ammar Campa-Najjar “to sound Hispanic,” adding he was “named after [Palestine Liberation Organization leader] Yasser Arafat, I kid you not.”

The congressman also added, “That is how hard that the radical Muslims have tried to infiltrate the U.S. government. You have more Islamists run this year at the federal level than ever before in U.S. history.”

Nick Singer, the director of communications for Campa-Najjar's campaign, offered this response to Hunter's comments:

“These are the desperate ravings of a congressman who believes he is above the law and has lost his grip on reality. Ammar is a Christian, worked at a church as a janitor and in youth ministry. He also was thoroughly vetted and given security clearance for his positions at the White House and administration. Ammar is not responsible for his family’s actions, just as Hunter’s wife is not responsible for his actions. Voters will see through the rhetoric and recognize reality on Election Day.”

According to officials with Campa-Najjar's campaign, he has gone by Ammar Campa-Najjar for years and Campa -- his mother's maiden name -- "pays homage to the family he knew. Adding Campa reveals more of who Ammar is to voters, not the other way around."

On President Trump:
“I don’t care about Trump’s personal stuff. I really don’t. He’s not my pastor. I want someone who kicks ass and doesn’t take names and rolls through that front gate … That’s what Trump does -- right up the middle.”

Hunter also declared himself the first congressman to endorse Trump, saying the president “understands the only way to fix something so broken as our system is, is to break it totally.”

On Judge Brett Kavanaugh’s Supreme Court nomination:
“This is a last stand for the Republican Party. This is it; this will define if we’re willing to fight for what’s right or give in to all the BS we see on the news and social media … This represents everything we stand for. This is worth fighting for.”

“The Russians put ads on Facebook. Do you know what we do as America? We interfere in almost every non-free election in the world,” Hunter said.

According to Hunter, the U.S. has meddled in elections in Russia, Asia, the Middle East and “all of South and Central American elections.”