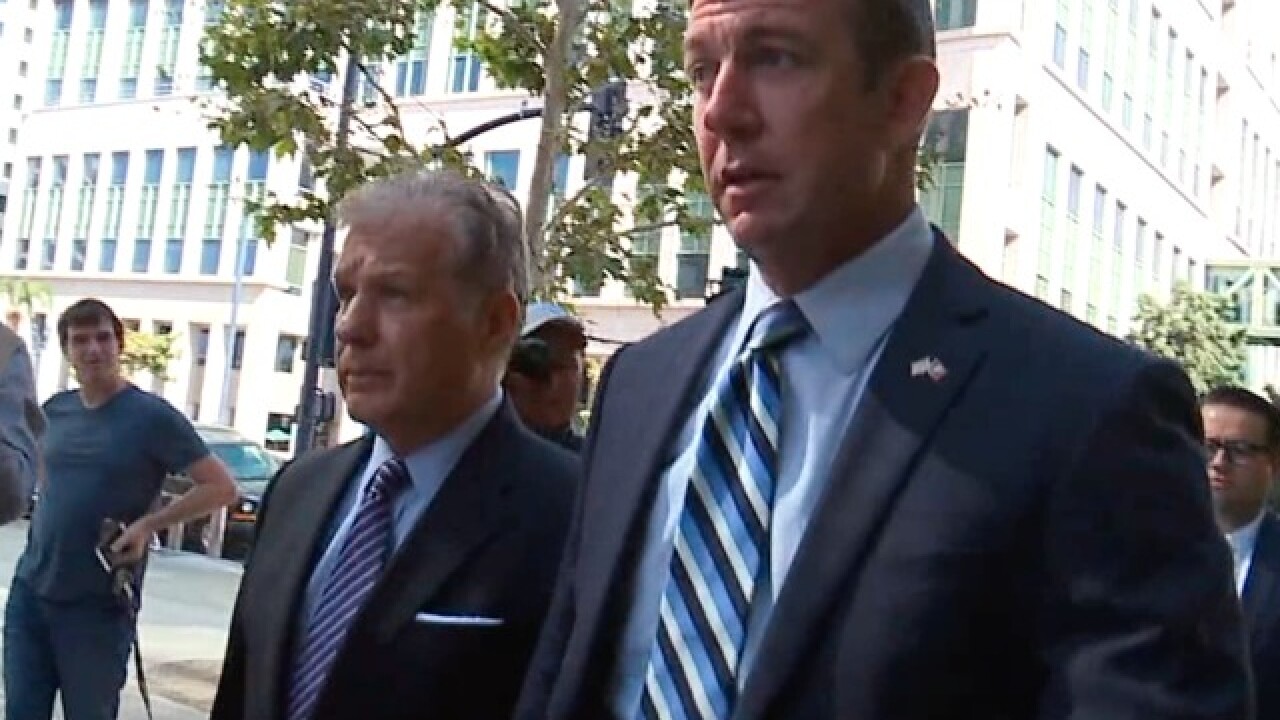 SAN DIEGO (KGTV) — Congressman Duncan Hunter and wife, Margaret, were arraigned Thursday in San Diego, where they entered their pleas to a 60-count indictment surrounding charges of campaign fund violations.

Here are five fast facts to know about Thursday's arraignment:

The Hunters both pleaded not guilty to the indictment handed down on Wednesday. Rep. Hunter has continued to plead innocent to charges against him since they were introduced in 2016.

"There was wrong campaign spending, but it was not done by me. I have trust in the justice system despite what's going on with Trump and Mueller, and the anti-Republican, pro-Democrat forces within the Department of Justice, at the highest levels, and the FBI, at the highest levels. I'm optimistic on the outcome," Rep. Hunter told 10News.

According to the 48-page affidavit, the Hunters are being charged with suspicion of converting more than $250,000 in campaign funds to pay for extravagant vacations and other personal expenses.

The judge ordered Rep. Hunter to surrender his firearms by Monday.

California state and federal laws make it illegal to own or possess firearms for any person who is "under indictment or information in any court for a crime punishable by imprisonment for a term exceeding one year."

It's not clear how many firearms the Hunters own or for how long they will not have access to them.

Prosecutors argued the Hunters have no financial assets and have been living paycheck to paycheck in court Thursday.

Wednesday's affidavit claimed the Hunters overdrew their bank account more than 1,100 times, resulting in bank overdraft fees of about $37,761.

The documents added that the Hunters' credit cards were "frequently charged to the credit limit, often with five-figure balances," resulting in about $24,600 in charges related to late fees.

As the U.S. Representative for District 50, Hunter has an annual salary of $174,000, according to  ballotpedia.org .

While Rep. Hunter arrived at court surrounded by awaiting cameras and protestors, his wife entered the courtroom through a separated entrance.

10News reporter Jon Horn tweeted from inside the court that his wife, "walked by Duncan Hunter without making eye contact."

Hunter told 10News earlier, "there was wrong campaign spending, but it was not done by me,"

As Hunter left the courtroom, Rep. Hunter was met by protestors once again, this time chanting "shame!" to which he remained "stone-faced" as he left.

Waiting outside the courtroom Thursday was Rep. Hunter's recent challenger for the 50th District, Ammar Campa-Najjar.

"Congressman Hunter served our country honorably abroad, I just happen to think that that man who served our country never made it home from the battlefield and I think Washington chewed him up and spat him out and engulfed him in the corruption that has plagued Washington for too long," Campa said to reporters Thursday.

Hunter and Campa will face off in November. In the June Primary, Hunter finished with 49 percent of the vote with Campa gaining 16 percent.