UPDATE (9:38 p.m.): CA-74, the Ortega Highway, will be closed Monday, according to Cleveland National Forest.

UPDATE (8:00 p.m.): Evacuations were lifted for the Lake Elsinore community in Riverside, according to a tweet from Cleveland National Forest.

UPDATE (7:33 p.m.): Crews reached 51% containment and the fire remained at 22,714 acres, according to a tweet from Cleveland National Forest.

(KGTV) -- On day six of the battle against the destructive Holy Fire, crews gained ground, increasing containment to 41 percent.

Early Sunday morning, officials with the Cleveland National Forest tweeted that the fire had grown to 22,714 acres, up from 22,158 Saturday night.

The tweet went on to say that crews are "continuing to improve fire lines and suppress where possible."

In total, more than 1,500 firefighters are fighting the Holy Fire. Assisting them are 86 water-dropping helicopters and 14 fixed-wing aircraft.

The fire started in the Trabuco Canyon area of the Cleveland National Forest.

The #HolyFire is currently @ 22,714 acres with 41% containment. 🔥 fighters are continuing to improve fire lines & suppress where possible.

If you’re back in the lifted evacuation areas, please drive safely. We still have crews driving/working in the areas.

Crews on the ground say steep terrain, dry fuels and inaccessible areas continue to be a factor in the spread of the fire.

Firefighters plan to focus their defense against the fire on communities and limiting the spread north towards Coldwater Canyon and south towards Highway 74 into the El Cariso Village area.

So far, 14 structures have been destroyed and six damaged.

Also Sunday, certain evacuations were lifted as authorities warned those returning home to use caution.

Mandatory evacuations have been lifted for the community of Sycamore Creek.

The National Weather Service issued an air quality alert for a large swath of Central California Sunday as more than a dozen wildfires continue to rage throughout the state.

Most of the smoke in the area is due to the Ferguson Fire. Smoke levels, according to officials, continue to reach well into the hazardous range. The alert will remain in effect until the fire is extinguished.

No alerts have been issued for San Diego County. 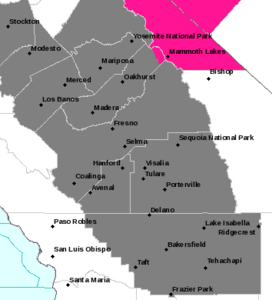