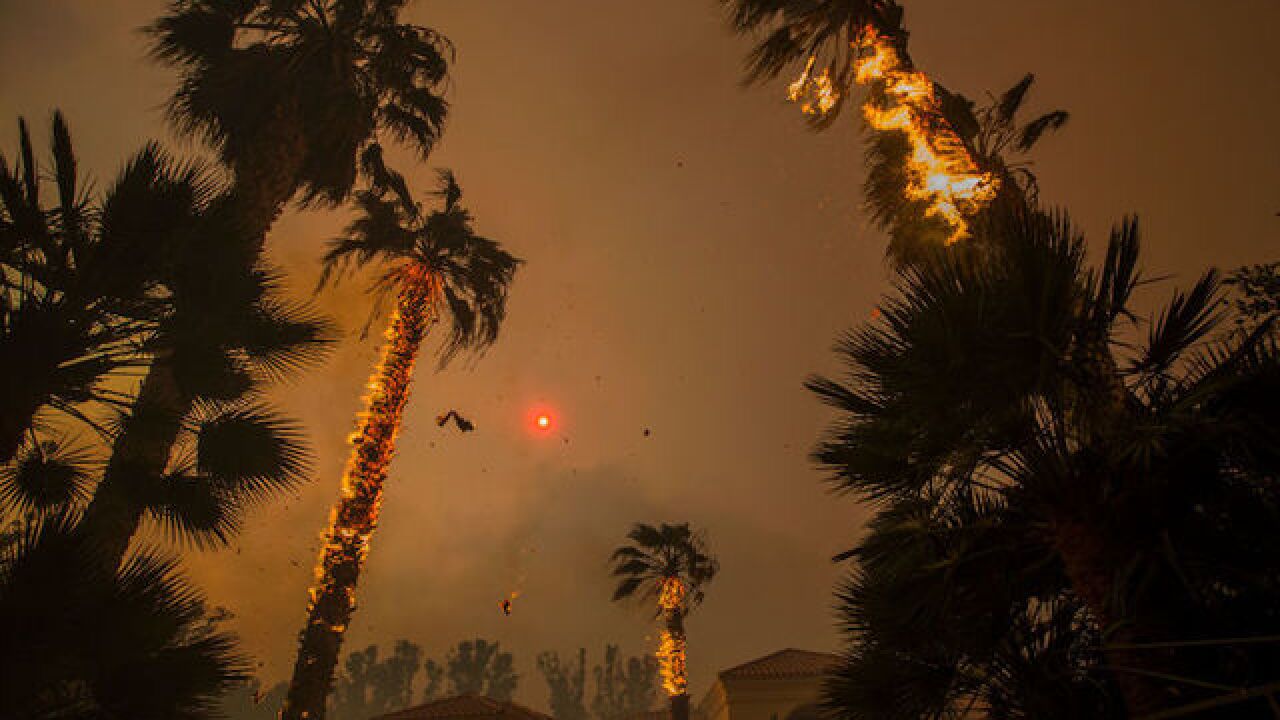 Image copyright 2018 Getty Images. All rights reserved. This material may not be published, broadcast, rewritten, or redistributed.
David McNew
<p>Embers falls from burning palms and the sun is obscured by smoke as flames close in on a house at the Woolsey Fire on November 9, 2018 in Malibu, California. </p>

INTERACTIVE MAP: Where the Woolsey Fire is burning in Ventura and LA counties

MALIBU (CNS) - A destructive 83,000-acre brush fire, pushed by strong Santa Ana winds, was zero percent contained Saturday morning as it burned onto the Pepperdine University campus in Malibu while on a march through Los Angeles and Ventura counties toward the sea.

Authorities gave an update on the fire Sunday morning. Watch the update in the player below:

The Woolsey Fire, which erupted Thursday afternoon, has destroyed at least 150 homes and forced the evacuation of 75,000 homes and 200,000 people in both counties as it indiscriminately consumed multi-million dollar mansions and mobile homes. The flames turned what it touched to ash as it forced a citywide Malibu evacuation and sent residents scrambling to find a way out of the burn area.

No injuries were officially reported, but sheriff's detectives are investigating the discovery of two bodies in the 33000 block of Mulholland Highway. They could not confirm whether the deaths were fire-related. Conditions in the area have hampered the investigation.

Los Angeles County Fire Department Chief Daryl Osby said damage assessment teams will be in the areas effected by the fire throughout the day, determining how many structures were lost or damaged. And with a lull in the winds, Osby said firefighters will be establishing line perimeters as a means of controlling and knocking down the fire.

"There is zero tolerance for any looting," Benedict said.

Ventura County Sheriff's Sgt. Eric Buschow said at least two people have been arrested on suspicion of looting in his county.

Pepperdine lifted a shelter-in-place order that had been in effect and canceled all school events for Saturday, and school officials were expected to update the status of Monday's classes and events later in the afternoon.

Los Angeles County fire strike teams and water dropping aircraft were working to contain the flames on or around the Pepperdine campus. No permanent structures have been lost, but video from the campus showed at least one vehicle and several bicycles scorched by flames.

"We have an arrangement that we shelter in place on this campus," Benton said. "When people get into a big hurry, fire department, sheriff's department, they move on instinct and their instinct is just get everyone out of harm's way and move 'em, move 'em, move 'em. Question is, where do you go? I'm very irritated that fire did not anticipate this, did not get assets here, did not realize that we would have 3,500 people on this campus. And now, they've frightened some of your brothers and sisters out into the roadways and I don't know where they are. I'm just fit to be tied."

He later tweeted a message that said early communication issues were resolved "leading to an effective response by law and fire professionals. We are grateful."

All Malibu schools in the Santa Monica Malibu Unified School District will remain closed until Wednesday, the district announced.

The fire started in Ventura County but raced into Los Angeles County, chewed its way through brush and into neighborhoods of Westlake Village and Malibu. The fire reportedly jumped Pacific Coast Highway about 10 p.m. Friday, moving toward Malibu Colony.

Residents who evacuated from Malibu were directed to southbound Pacific Coast Highway, creating miles of stand-still traffic along the scenic route. Authorities wound up closing the road to all northbound traffic out of Santa Monica, allowing southbound motorists to use all four lanes.

North of the Ventura (101) Freeway, evacuated residents in the Hidden Hills and other neighborhoods were being directed north toward Chatsworth and the Ronald Reagan (118) Freeway.

Authorities later ordered mandatory evacuations for the West Hills area in the San Fernando Valley, not far from the fire's origin.

Spectrum customers in the wildfire area were without cable and Internet service Saturday as repair teams worked to restore service, a statement from the company said.

Driven by 50- to 60-mph winds, the flames jumped south across the 101 Freeway in the Liberty Canyon area early Friday, sending it on a course through Malibu and its exclusive celebrity enclaves.

It was unclear how many homes were lost as the fire relentlessly advanced, but on-scene crews reported dozens of structures burning in various canyons. There also were reports of flames ripping through an apartment building and a mobile home park, along with people calling authorities to say they were trapped in burning structures.

National Park Service officials reported the famed Western Town at Paramount Ranch, a filming location for hundreds of TV and movie productions, including HBO's "Westworld," had burned to an unknown extent.

Evacuation orders affected the entire area south of the 101 Freeway from the Ventura County line to Topanga Canyon Boulevard, south to the Pacific Ocean.

Mandatory evacuations were earlier issued for the area north of the 101 Freeway from Valley Vista to Reyes Adobe in Agoura Hills, Calabasas and Westlake Village.

The American Red Cross announced the nearest evacuation center for residents of Malibu was at Palisades High School, 15777 Bowdoin St., in Pacific Palisades. Evacuation centers also were established at Canoga Park Senior High School at 6850 Topanga Canyon Blvd. in Canoga Park, at Rancho Santa Susana Recreation Center at 5005-C Los Angeles Ave. in Simi Valley and at Taft High School at 5461 Winnetka Ave. in Woodland Hills, although it was reported to be at capacity.

Evacuation centers for animals were opened Friday morning at Hansen Dam, 11770 Foothill Blvd. in Lake View Terrace, after the evacuation center at Pierce College in Woodland Hills reached capacity. And a large animal evacuation center was established at the Zuma Beach parking lot in Malibu. Industry Hills Expo Center in the San Gabriel Valley was also offering shelter for horses from fire-affected areas. In Ventura County, Borchard Community Center at 190 Reino Rd. in Newbury Park was accepting dogs and cats, while the Camarillo Community Center at 1605 E. Burnley St. was accepting small animals.

With the fire jumping the freeway Friday morning, the California Highway Patrol shut down a four-mile stretch of the 101 Freeway between Las Virgenes to Kanan roads. The closure was extended to include the entire freeway from Valley Circle Boulevard in Hidden Hills to Reyes Adobe Road in Agoura Hills, according to Caltrans.

The devastation has been swift since the fire broke out at 2:25 p.m. Thursday in Ventura County south of Simi Valley, pushed by strong Santa Ana winds. Early Friday, the whipping winds prevented fire commanders from ordering aerial assaults in the early morning hours. Some flights began at 5:30 a.m. as the wind died down, but winds quickly began picking up again as dawn broke.

Los Angeles County and city crews were assisting in the firefight, which was taking place as a second brush fire raged further west in Ventura County in the Santa Rosa Valley/Thousand Oaks area.

Heavy smoke and strong winds hampered visibility for crews on the fire lines and residents trying to evacuate fire zones.

Winds died down Saturday, but were expected to pick up again later Saturday and Sunday afternoon, as the National Weather Service issued a red flag warning for gusty winds and low humidity in effect through Tuesday afternoon.

President Trump addressed the state's wildfires -- including the 100,000-acre Camp Fire in Northern California's Butte County that is believed to have killed at least nine people -- on Twitter.

"There is no reason for these massive, deadly and costly forest fires in California except that forest management is so poor," the president tweeted Saturday. "Billions of dollars are given each year, with so many lives lost, all because of gross mismanagement of the forests. Remedy now, or no more Fed payments!"