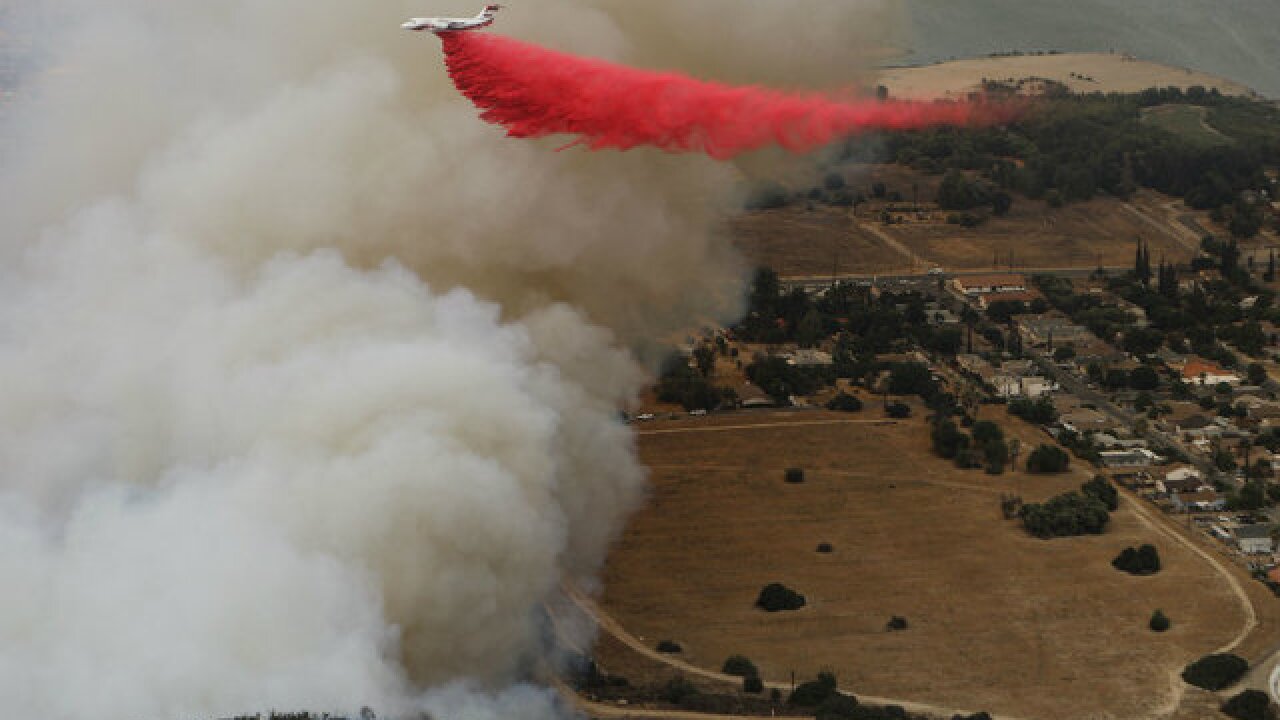 TRABUCO CANYON, Calif. (CNS) - The week-old Holy Fire burning in Orange and Riverside counties has blackened 22,986 acres and was 64 percent contained Tuesday, but evacuation orders remain in place for thousands of people.

U.S. Forest Service officials said in a Tuesday afternoon tweet they expect the fire to be fully contained by Aug. 21.

In Orange County, Trabuco and Holy Jim canyons remain under mandatory evacuation orders, and all campgrounds in the Trabuco Ranger District are closed. Back country fire roads are closed to hiking and bicycling, including Trabuco Creek, Maple Springs, North Main Divide, Bedford and Indian Truck Trail.

But in a positive development for motorists, a long stretch of the Ortega (74) Highway that has been closed between Orange and Riverside counties due to the fire was reopened to traffic Tuesday.

In Riverside County, evacuation orders were lifted for the El Cariso and Rancho Capistrano areas, but mandatory evacuations remained in place for the Mystic Oaks community near Long Canyon Road. The Blue Jay, Falcon and Los Pinos campgrounds all remained closed, along with trails leading into the burn area.

A voluntary evacuation order for the Trilogy area in Temescal Valley also remained in effect.

Aided by 14 water-dropping helicopters and seven fixed-wing aircraft, firefighters on the ground will work to build fire lines to the north and east of the fire's point of origin in Holy Jim Canyon, according to the Forest Service. The 1,399 firefighters battling the blaze will focus on protecting homes and buildings.

Menifee Union School District schools reopened Monday, five days after their school year was supposed to begin. Other affected districts delayed their first days of school until next week. The Lake Elsinore Unified School District will go back on Aug. 20.

Schools in the Corona-Norco Unified School District located south of the 91 Freeway and east of Border Avenue in Corona also pushed back the first day of school until next Monday.

As of 10:00am this morning, the 74 will reopen to through traffic. Evacuations for El Cariso Village and Rancho Capistrano have been lifted. The Mystic Oaks community remains under mandatory evacuations. The community of Trilogy remains under Voluntary evacs. pic.twitter.com/SUf4jpCrDl

Firefighters were able to save a threatened school in the district, Rice Canyon Elementary, from flames, stopping them just before they reached the campus.

As of Monday, 18 homes had been confirmed destroyed -- 12 in Orange County and six in Riverside County. The Orange County structures lost were believed to be primarily in the Holy Jim Canyon area, the flashpoint of the fire.

A full assessment of damage was continuing.

Bommarito noted that the area probably hasn't burned since the early 1980s.

The man accused of starting the fire, 51-year-old Forrest Gordon Clark, remained jailed in Santa Ana in lieu of $1 million bail, an amount he scoffed at during an animated appearance in a Santa Ana courtroom Friday. He labeled the arson charges against him a "lie" and insisted he was being threatened by gang members.

When a court commissioner ordered his bail to remain at $1 million, Clark said he could easily afford it and asked whether he could pay it right away.

Clark was charged with aggravated arson damaging at least five inhabited structures, arson of inhabited property, arson of forest and criminal threats, all felonies, as well as two misdemeanor counts of resisting arrest.

His arraignment was delayed until this coming Friday, and he could face 10 years to life in prison.

Residents seeking information on the Holy Fire may call (714) 573-6200, or register at rivcoready.org for text updates.