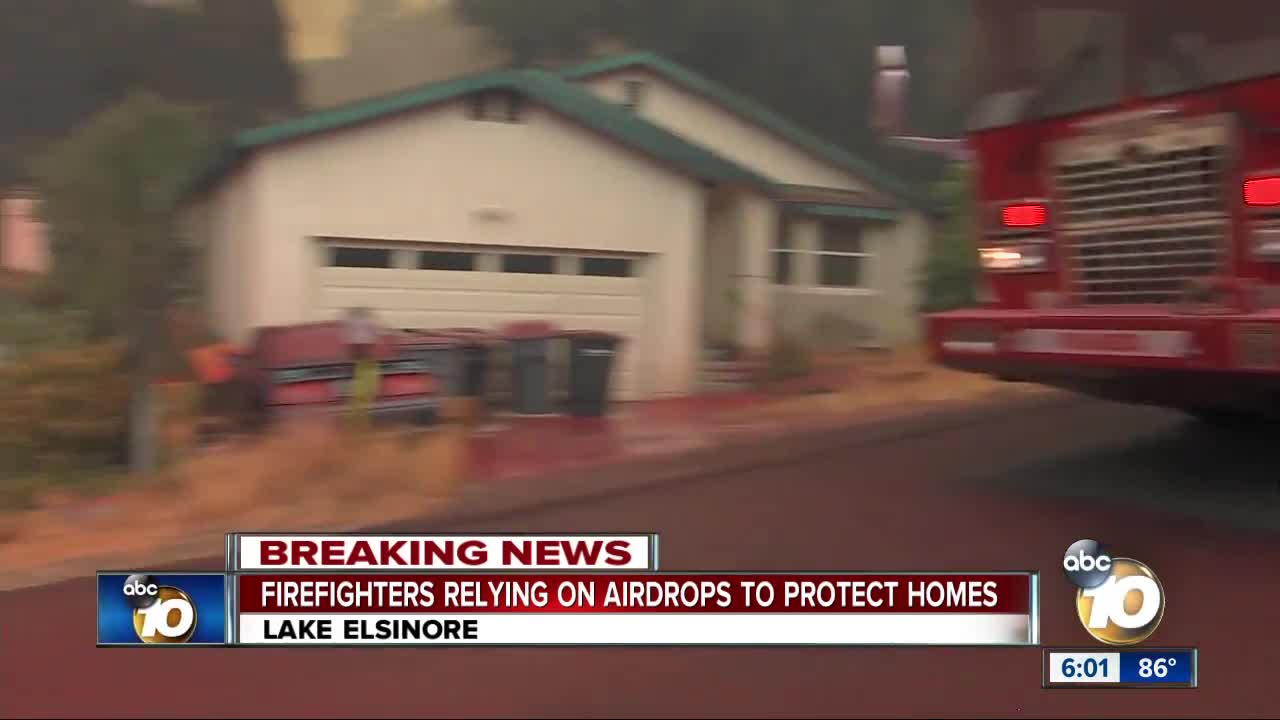 A Lake Elsinore homeowner never thought she'd see flames up to her home, which she has been listed on the market for sale. 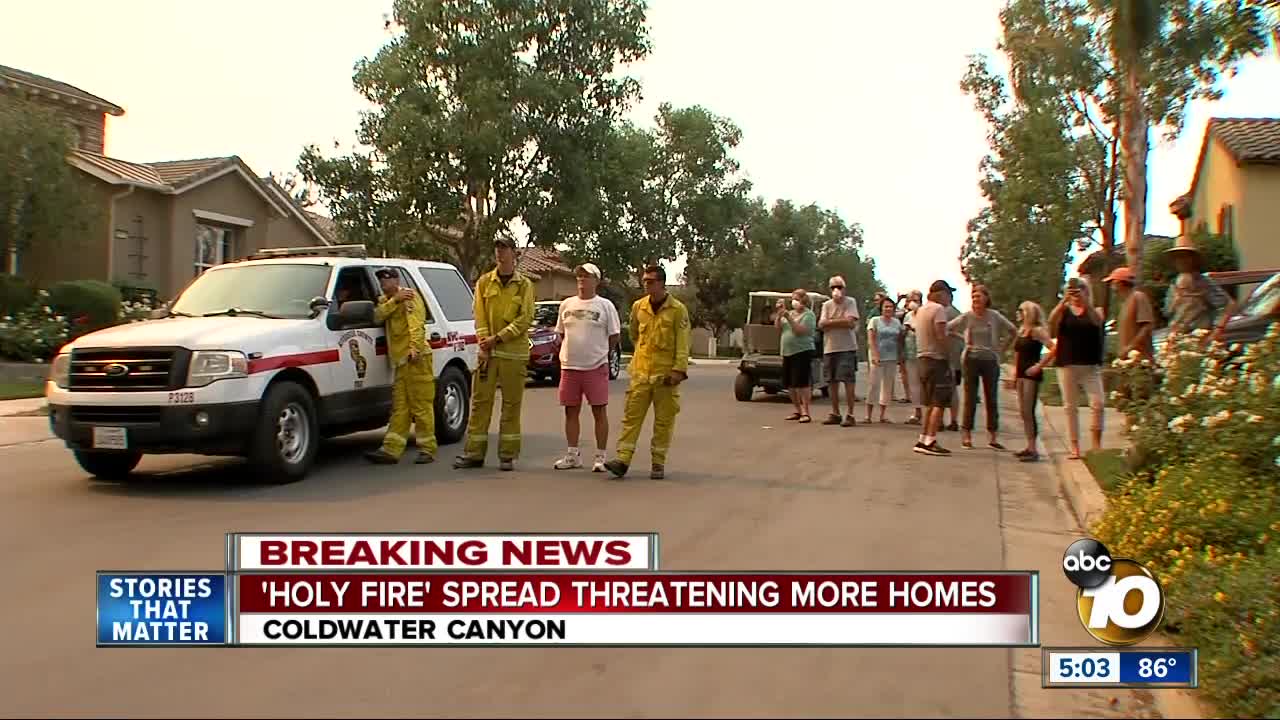 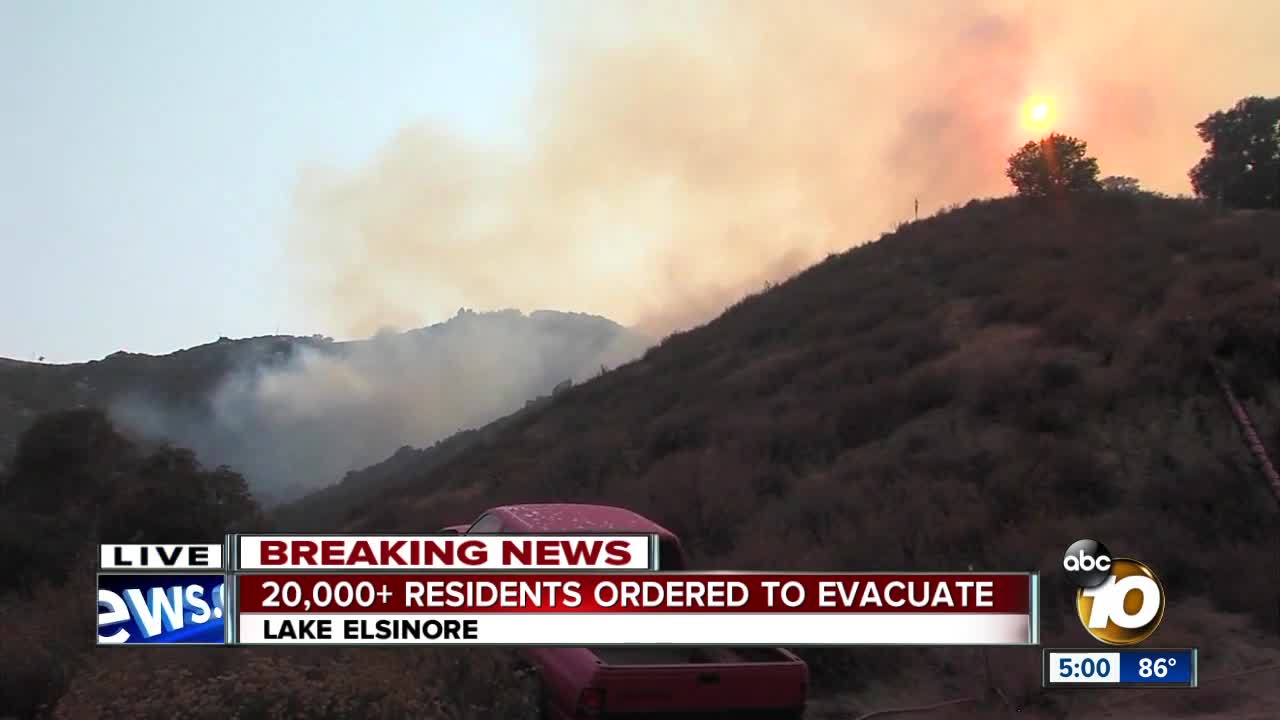 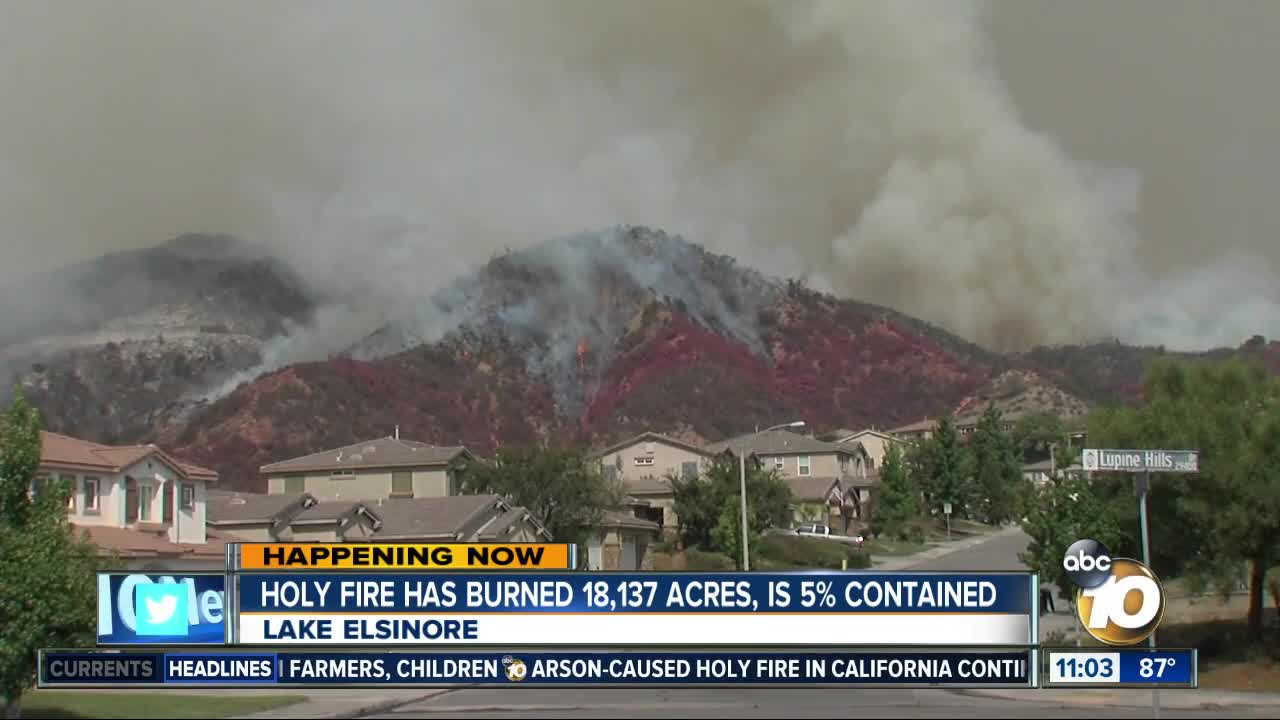 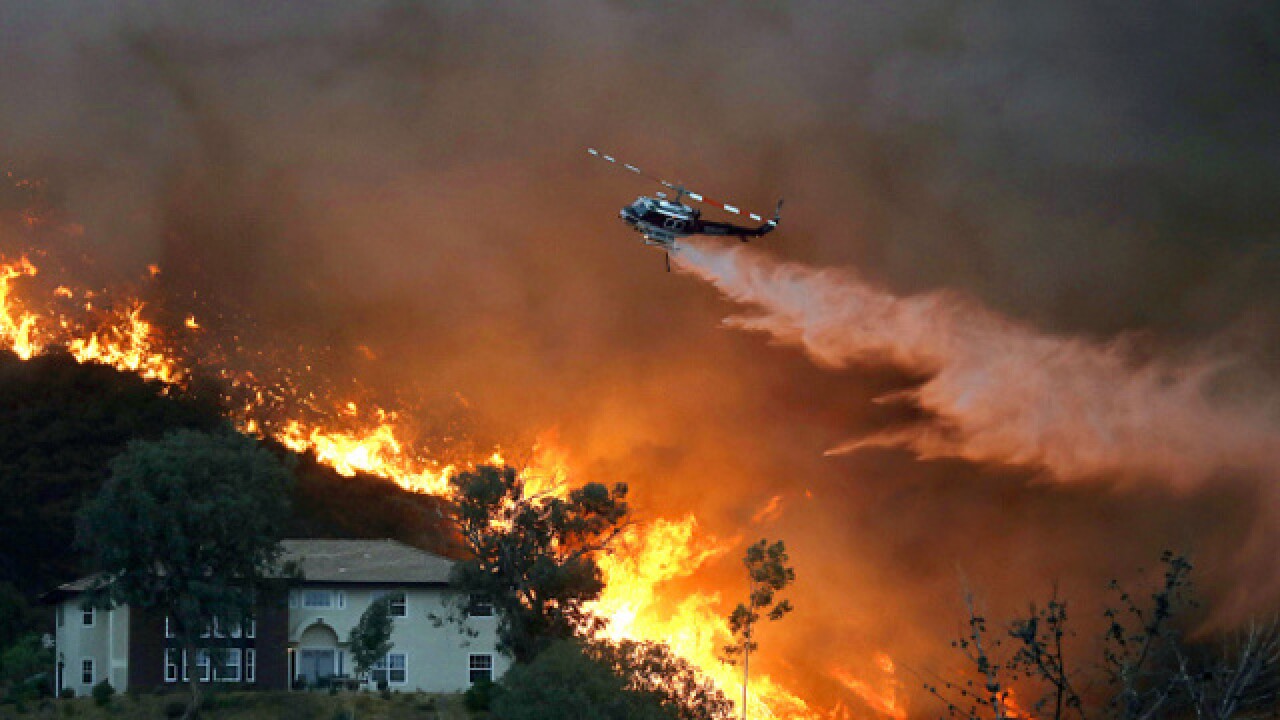 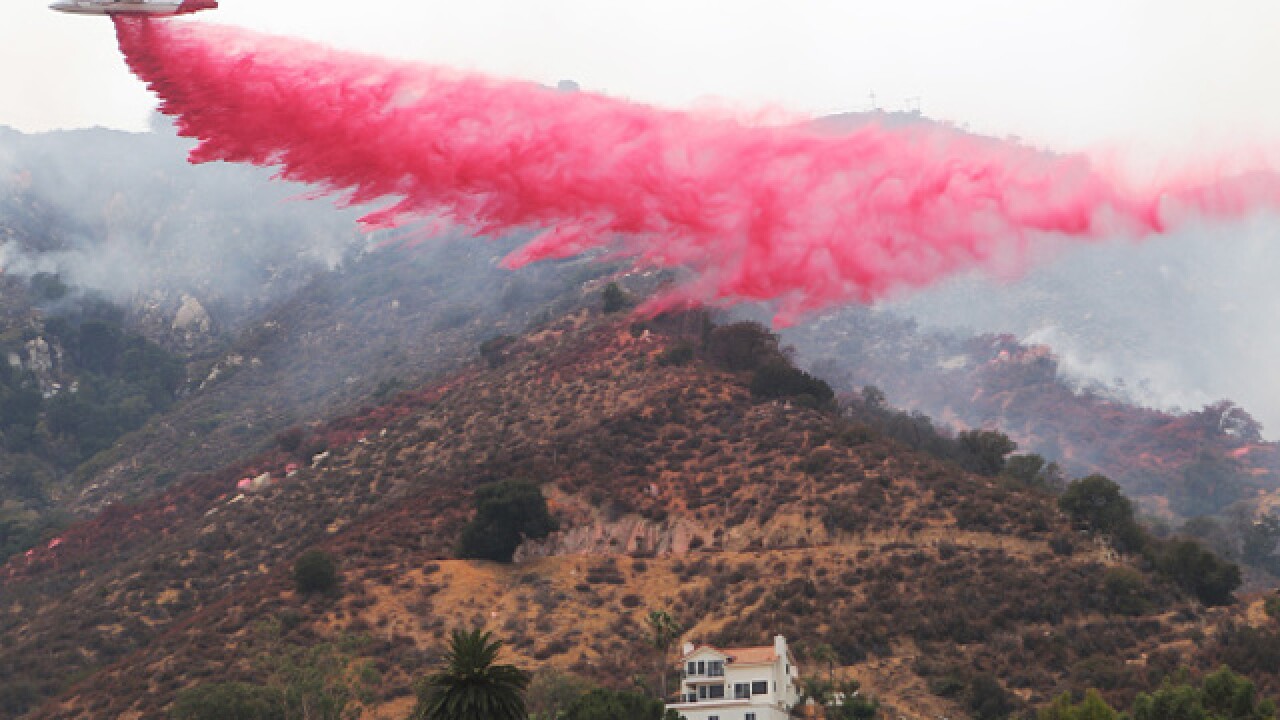 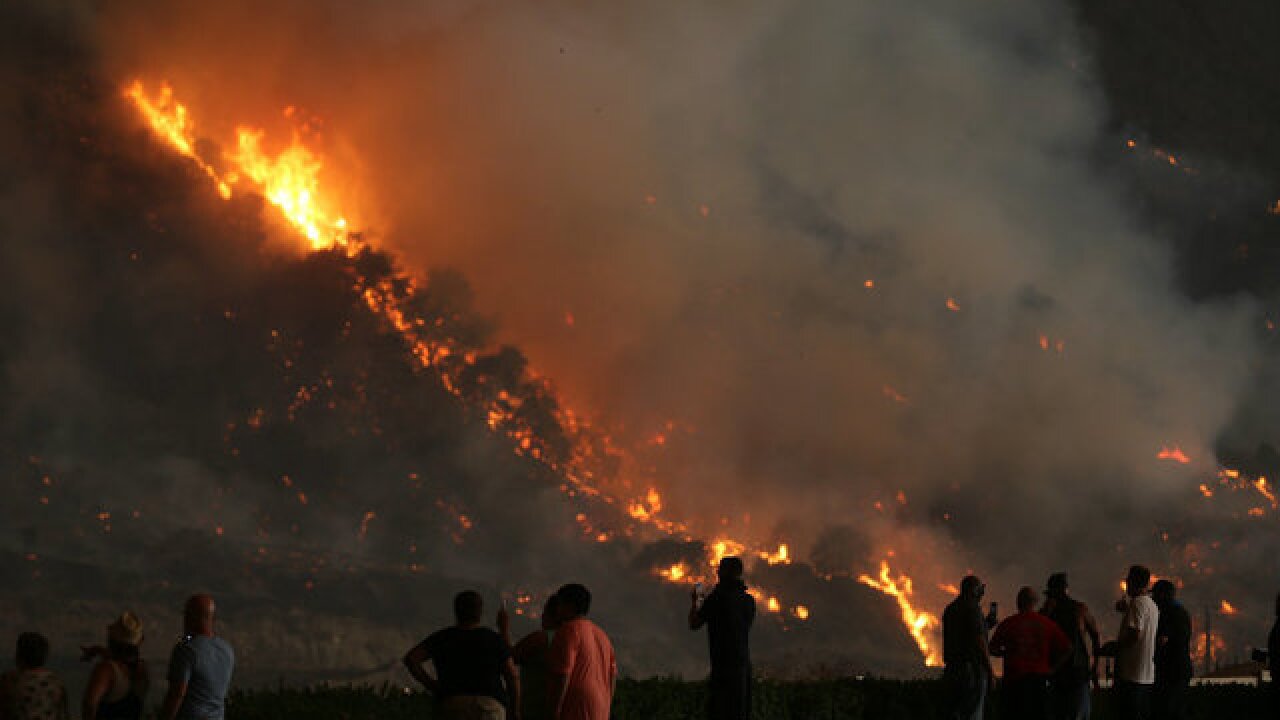 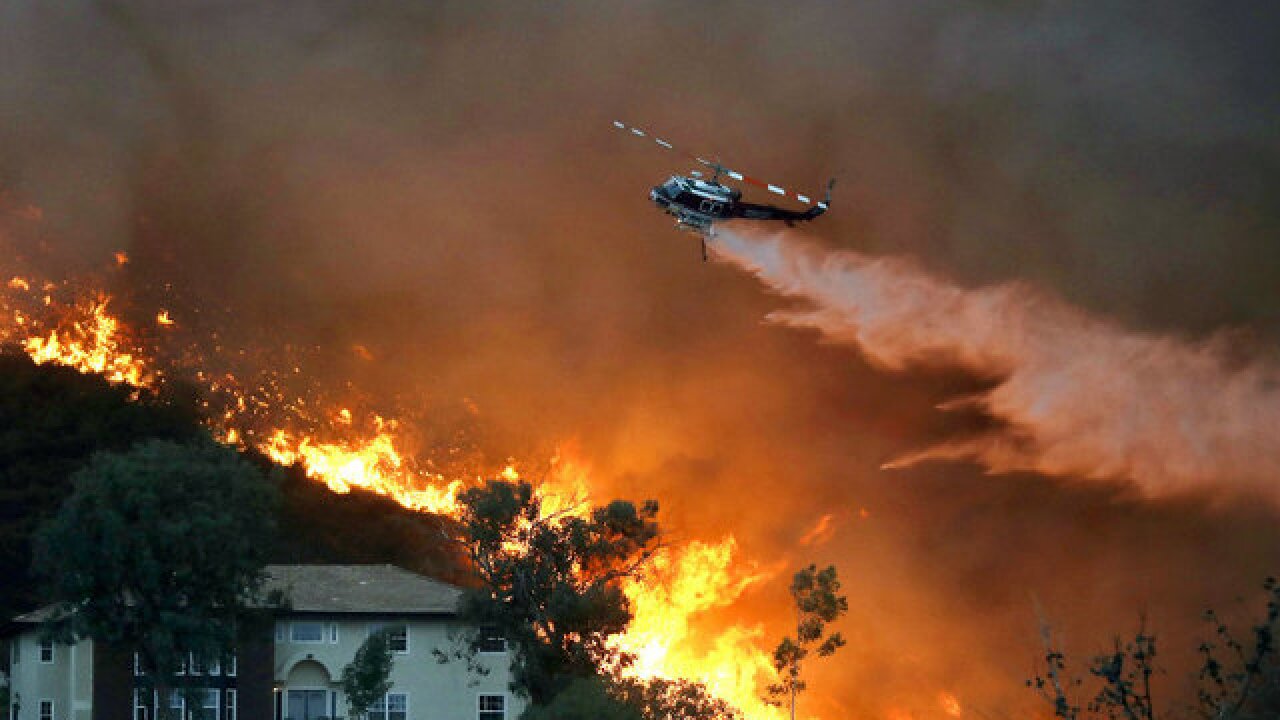 (KGTV) - A state of emergency is in effect for Orange and Riverside counties as crews work to stop the fast-moving Holy Fire that has forced over 20,000 people to evacuate.

The blaze, which erupted Monday in the Trabuco Canyon area of the Cleveland National Forest, has burned 19,107 acres and is 10 percent contained as of Friday evening.

In a tweet, U.S. Forest Service officials said: "For those wondering about containment, the hand/containment line grows as the fire grows. We continue to actively engage, but cannot get ahead of the fire."

More than 1,200 firefighters, with support from 86 water-dropping helicopters and 14 fixed-wing air tankers, are battling the fire, which has moved east into the Lake Elsinore area in Riverside County.

The steep and treacherous terrain has made it difficult for ground crews and fire engines to get close to the flames, prompting the heavy use of water drops from the air.

On Thursday, California Gov. Jerry Brown declared a state of emergency for Orange and Riverside counties due to the fire. The declaration allows the state’s Office of Emergency Services to aid the affected counties.

The proclamation also waives various requirements for state agencies to procure materials, goods and services to assist with the response and recovery from the impacts of the fire, suspends the one-week waiting period to apply for unemployment benefits for people who have lost their jobs because of the fire, allows people who have lost their driver's license, vehicle registration certificate or certificate of title for their vehicles because of the fire to get free replacements and to get free replacements of birth, death, marriage and divorce certificates destroyed by the fire.

Forrest Gordon Clark, who is accused of igniting the Holy Fire, was formally charged on Thursday, but did not appear in court to be arraigned after refusing to leave his jail cell.

According to the Orange County District Attorney’s Office, the 51-year-old Clark is charged with one felony count each of aggravated arson of five or more inhabited structures, arson of inhabited property, arson of forest, criminal threats, two felony counts of resisting and deterring an executive officer, and a sentencing enhancement for arson burning multiple structures.

His bail was set at $1 million.

According to the Orange County Register, Clark allegedly sent threatening emails to a volunteer fire chief last week, including one that included a statement of “this place will burn down.”

The U.S. Forest Service said the Holy Fire has forced the evacuation of nearly 7,500 homes and structures. At least 12 structures have been destroyed. The estimated number of people evacuated is 21,484 as of Friday morning.

Forest Service officials noted Interstate 15 is not closed despite the fire burning near the freeway.

Mandatory evacuations are in place for McVicker Canyon, Rice Canyon, Horsethief Canyon, Glen Eden, El Cariso Village, Sycamore Creek and Rancho Capistrano, along with the Ortega (74) Highway corridor from the Lookout restaurant to the Nichols Institute. Those areas had previously been under voluntary evacuation orders.

Caltrans ordered the complete closure of Ortega Highway because of the proximity of the brush fire to the two-lane corridor. California Highway Patrol officers implemented the closure from Grand Avenue in Lake Elsinore to the Nichols Institute entrance in San Juan Capistrano in Orange County, covering about 28 miles.

All schools in the Lake Elsinore Unified, Menifee Unified, Perris Union High School and Perris Elementary School districts in Riverside County will be closed today due to poor air quality caused by the fire.

Trabuco and Holy Jim canyons were also under mandatory evacuation orders, as well as the Blue Jay and El Cariso campgrounds. All campgrounds in the Trabuco Ranger District were closed and forest road closures were in effect for Trabuco Creek, Maple Springs, North Main Divide, Bedford and Indian Truck Trail.

Riverside County created a website for residents to look up their evacuation status.

Officials issued this statement regarding the weather forecast during the firefighting effort:

"Forecasted weather for the fire area will see temperatures between 91-97 and relative humidity of 30-40 percent and could see gusty winds to 25 mph from the west. These conditions will increase the likelihood of extreme fire behavior as well as heat illness issues for the firefighters and the public. Monsoonal moisture coupled with an approaching eastern hurricane will increase instability and bring scattered thunderstorms to portions of Southeastern California. This combination will result in a period of near critical fire weather over the Holy Fire. Drying and warming over the weekend with gusty local winds with midlevel moisture will return to the area leading to more instability, gusty winds and a chance for thunderstorms."

Thick smoke and ash spewing from the Holy Fire scorching Orange and Riverside counties have prompted air quality warnings in the area.