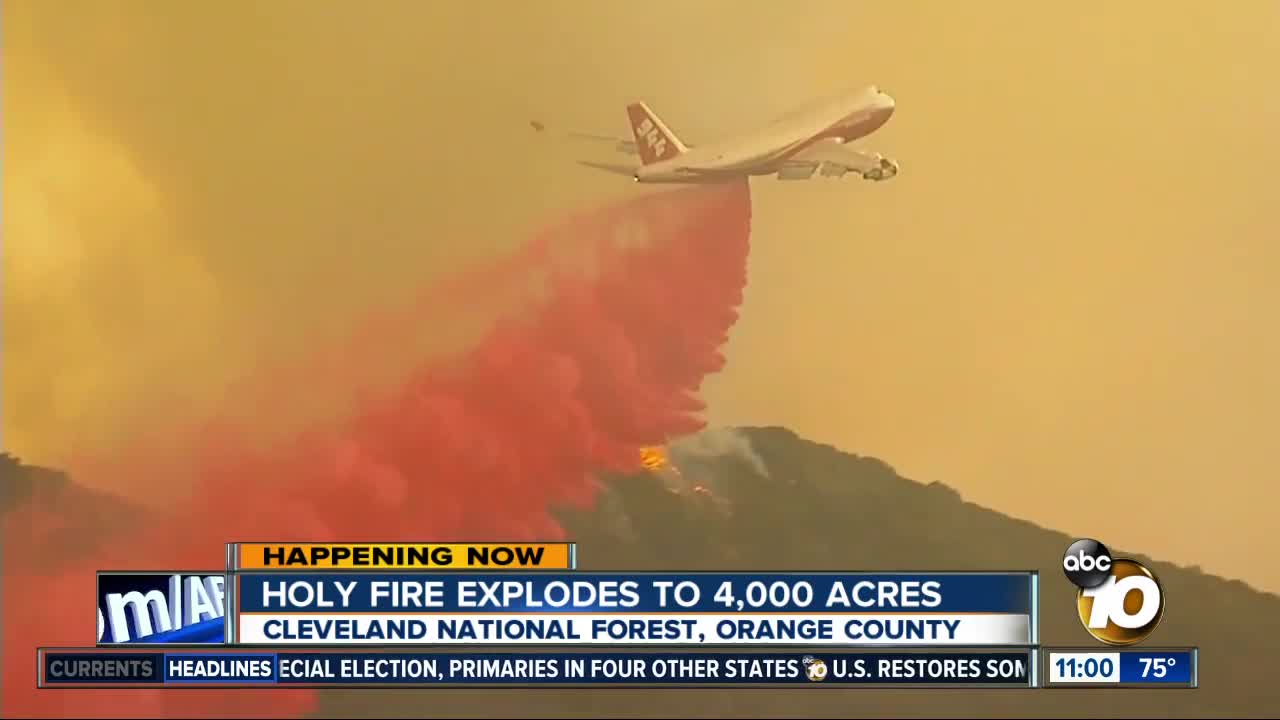 Evacuations are in effect. 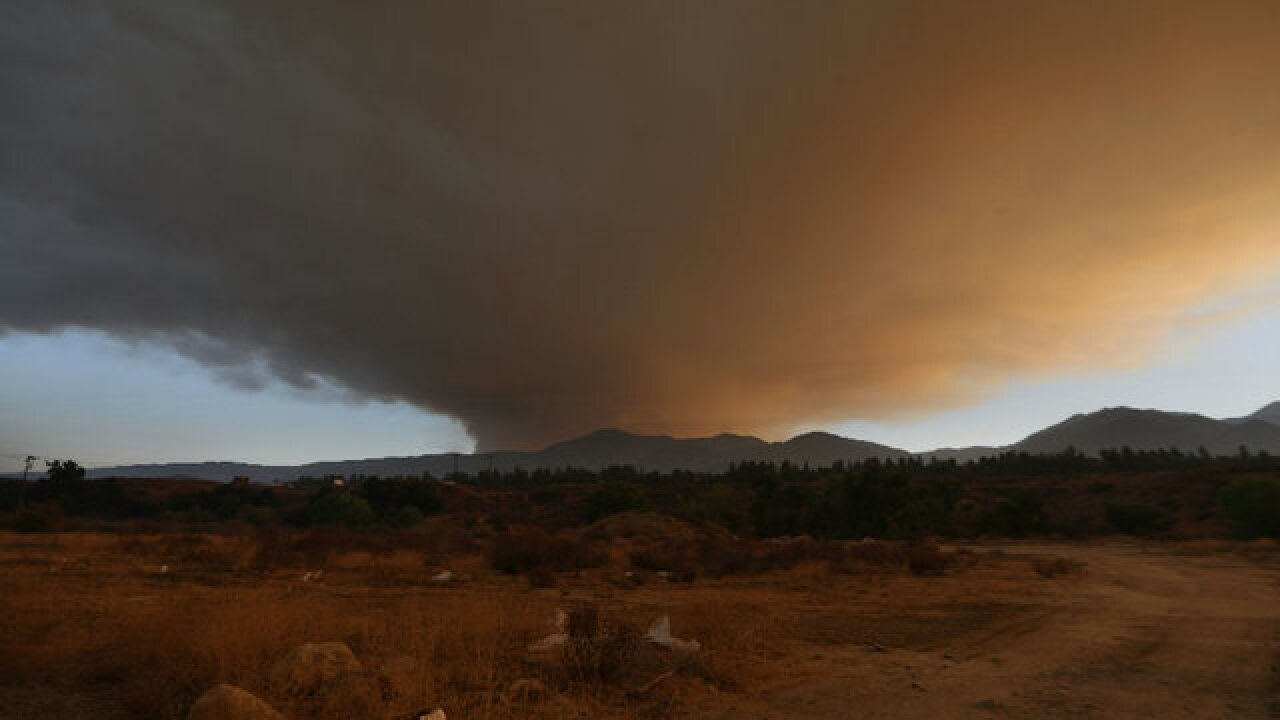 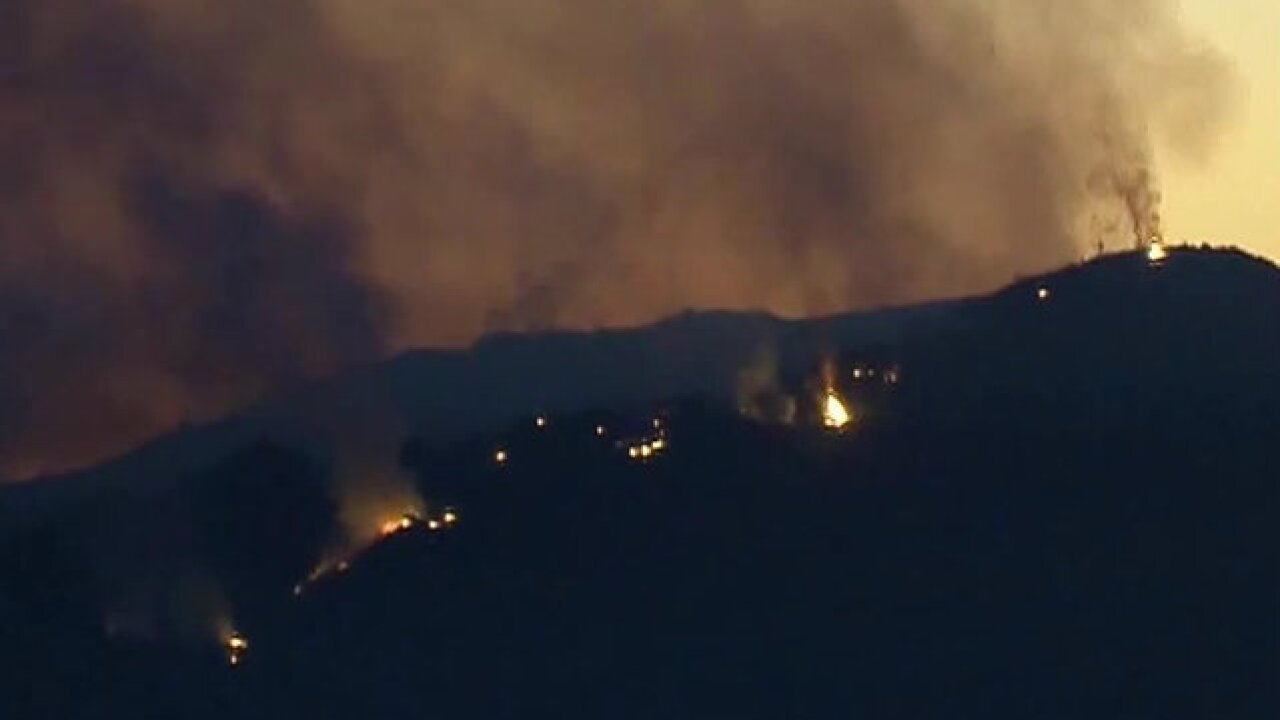 (KGTV/CNS) - Evacuation orders remained in effect Tuesday in light of a fast-moving wildfire that erupted in the Cleveland National Forest the day before.

The blaze dubbed the Holy Fire, is five percent contained and has burned at least 3,399 acres as of Tuesday evening, according to the U.S. Forest Service. The acreage was downgraded due to more accurate mapping, officials with the Cleveland National Forest said.

A total of 10 helicopters and five air tankers are currently on scene assisting firefighters.

#HolyFire update: Due to more accurate mapping, the total acreage is 3,399 with 5% containment.

According to fire officials, the Holy Fire erupted at around 1:30 p.m. Monday near Holy Jim Canyon and Trabuco Creek roads. It initially burned 7-10 acres in the Trabuco Canyon area, but exploded in size to several thousand acres by 8 p.m.

The fire was moving at a moderate rate of speed as of early Monday evening, but flames have destroyed at least one structure and threatened several communication towers at the top of a nearby hill.

At least 600 firefighters from multiple agencies were assigned to battle blaze. Cal Fire air tankers and water-dropping helicopters were requested to conduct aerial fire attack operations after sunset, even though night flying is regarded as inherently dangerous and not all water-fighting helicopters are configured to operate in darkness.

RELATED: Interactive map: Where the Holy Fire is burning

Highway 74, west from Lookout Restaurant to Nichols Institute and all connecting roads in the communities of Rancho Capistrano, El Cariso Village, and Blue Jay have been placed under a voluntary evacuation warning.

Two people hiking near a canyon when the fire erupted had to be rescued and are now safe, according to fire officials. Officials also said two people were treated due to heat-related injuries.

The Holy Jim trail, near where the fire is burning, is a 2.8-mile trail that connects several other mountain trails together. Summertime temperatures in the area regularly climb into the triple digits.

Fire officials said they believe the area has not burned since 1980.