The fire started as a seven to 10 acre fire in a canyon and, within three hours, grew to more than 1,000 acres.

The brush in the area hasn't burned in more than 40 years, leaving excess fuel for the blaze to burn through.

Almost immediately after a large plume of smoke shot into the air, people throughout Southern California began posting images on social media. 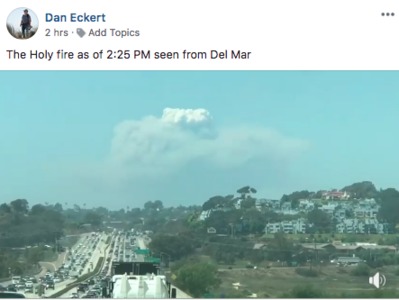 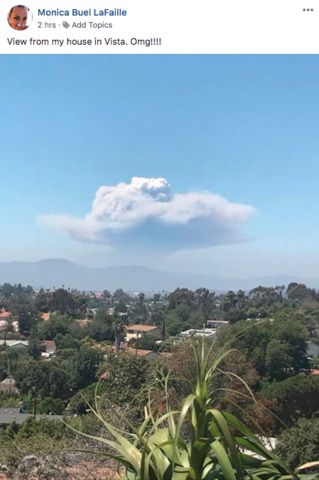 Current view of #holyfire smoke from my city Lake Elsinore. Praying they’re able to get this fire out soon and do so without any injuries. Our firefighters are working so hard this fire season, God bless them and keep them safe. MM pic.twitter.com/JBNKkh1wqJ

View from Santiago Peak of the #holyfire in Orange County. Image courtesy of HPWREN. #cawx pic.twitter.com/ZlstAK3ktZ

When we first moved to our neighborhood my biggest fear was the beautiful Cleveland National Forest that we live next to would one day catch on fire. Well, today it did. Pray for those firefighters that have had such a rough summer. #ourstreet #holyfire

Front of my house #holyfire

From my office window at home. Thinking of the responders and hoping everyone stays safe #holyfire

Some video of the #HolyFire by our house