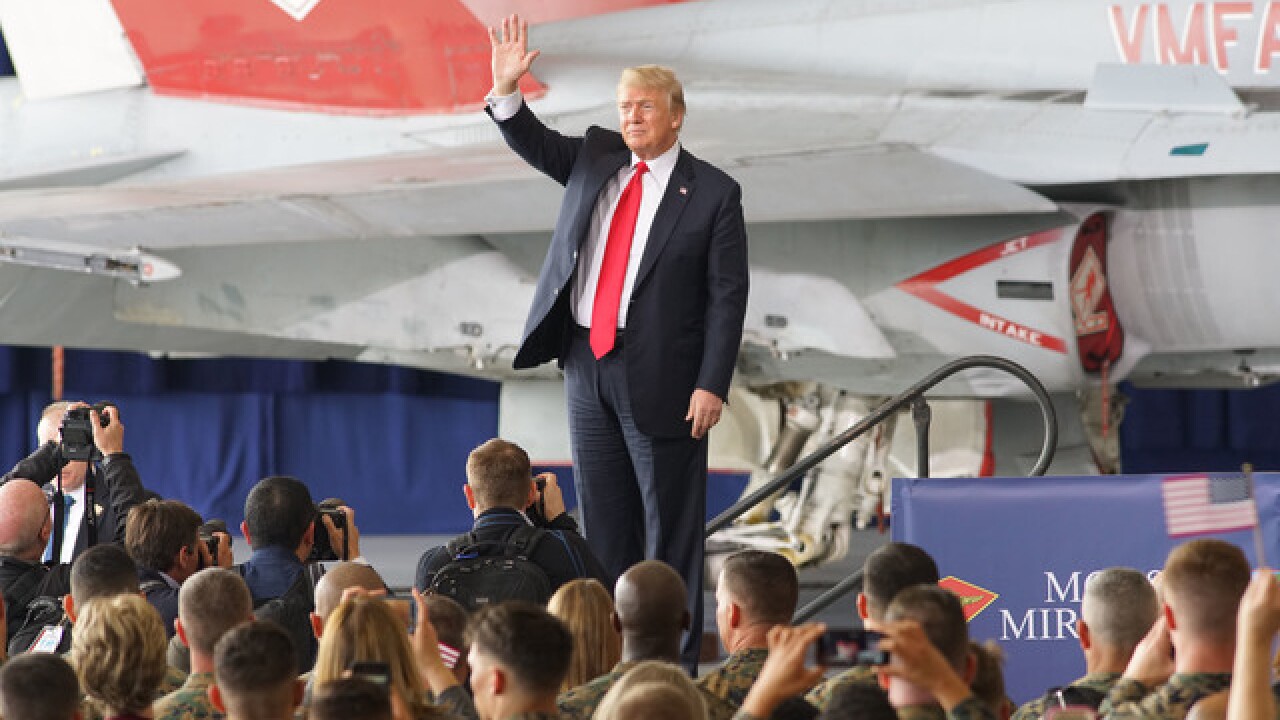 SAN DIEGO (KGTV) - Among a hanger filled with MCAS Miramar troops, President Donald Trump made a slew of promises: New gear, a massive pay raise, and a new outlook on space "war-fighting."

"I have a message for you straight from the heart of the American people, and you know what that is. We support you. We thank you. We love you. And we will always have your back like you have ours," President Trump told a hanger packed with service members.

Trump continued, promising to uphold his administration's policy of "peace through strength" and the "largest military buildup since Ronald Regan."

To the delight of those in attendance, the president promised to also institute the largest pay raise in a decade.

"We're also investing in our most powerful weapon of all ... you. In 2019, we want to give you your largest pay raise in over a decade," Trump promised.

It was my great honor to deliver a message at the Marine Corps Air Station Miramar to our GREAT U.S. Military, straight from the heart of the American People: We support you, we thank you, we love you - and we will always have your back! pic.twitter.com/oCt1nH3DON

Trump added that MCAS Miramar is in line to receive new aircraft and "weaponry like we've never had before or sent before."

In line with promises of new gear, Trump said the U.S. would "lead again" on the final frontier and introduced his administration's strategy for space exploration "recognizes space is a war-fighting domain."

"We may even have a 'space force,'" Trump said. "We're doing a tremendous amount of work in space. I said maybe we'll need a new force. We'll call it 'the space force.'

"Our service members will be vital to ensuring America continues to lead the way into the stars," Trump continued. "We're way, way behind."

Trump went on to tout his long-promised border wall, hours after he toured prototypes in Otay Mesa.

Tuesday, officials brought the president to the border to inspect the prototypes showing possible designs for a wall across the U.S.-Mexico border.

"You're not going to see them climbing over this wall too easily," Trump said.

The president's speech went on to touch on human trafficking, calling it "the worst that it's ever been," and "sanctuary city" policies.

"They shield criminals," Trump said of the policies. "We are asking Congress to ensure that no federal funds subsidize this dangerous and unlawful behavior."

California was designated a "sanctuary state" by Gov. Jerry Brown. The state has routinely said it will not allow local law enforcement to cooperate with federal immigration investigations and raids.

As the Rolling Stones' "You Can't Always Get What You Want" rolled over the speakers, Trump thanked troops and made his way back to Air Force One for a Los Angeles fundraiser.