(CNS) -- Gov. Gavin Newsom, who has come under fire from some business groups and political opponents for his handling of the COVID-19 pandemic and imposition of economic restrictions, insisted Monday the lifting of regional stay-at-home orders was based on scientific projections of future hospital demand -- not politics.

The stay-at-home order for the 11-county Southern California region was imposed Dec. 6 when the regional intensive-care unit capacity dropped below 15%. The state announced Monday morning the order in Southern California and all other regions of the state was being lifted, based on a four-week projection of future ICU demand.

Critics were quick to lash out at Newsom over the announcement.

"This governor's decisions have never been based on science," California Republican Party Chairwoman Jessica Millan Patterson tweeted. "Him re-opening our state is not an attempt to help working Californians, but rather an attempt to counter the Recall Movement. It's sad and pathetic."

Former San Diego Mayor Kevin Faulconer, a Republican who has established an exploratory committee for a possible gubernatorial campaign, responded with: "A new day, a new erratic COVID rule."

"Californians want to follow the science. Instead we're forced to follow a governor who decides on a whim the fate of millions of Californians while refusing to release the data behind his contradictory and arbitrary decisions. It's absurd," he said.

The governor pointed to the state's current projections that estimate Southern California ICU capacity will reach 33.3% by Feb. 21, a four-week projection. The region's current capacity is still estimated at 0%, but Newsom said the future projection is based on current hospital capacity, transmission rates, case rates and the proportion of COVID patients who need to be admitted to the ICU. 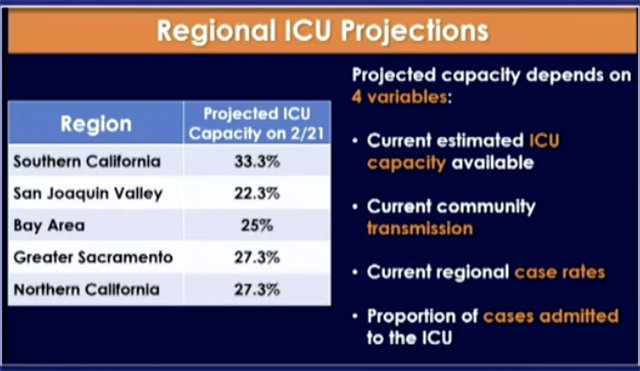 He said that combination of factors "really is the forecast that gives us confidence on where we will land in a number of weeks."

"The goal of this announcement is to socialize our projections as well as illuminate and further advance an understanding, a deeper understanding of what today means and what it doesn't mean," Newsom said. "And it's in that respect I want to remind folks we're not out of the woods. We're seeing a flattening of the curve. Everything that should be up is up, everything that should be down is down -- case rates, positivity rates, hospitalizations, ICUs, testing starting to go back up as well as vaccination rates in this state, but we are not out of the woods."

Newsom released updated statewide figures showing sharp drops over the past two weeks in average daily case numbers and a 20% drop in hospitalizations and 10% dip in ICU admissions. He said the 14-day average testing positivity rate fell from 13.6% to 9.4%, while the rate over the past seven days has dropped to 8%, ranking better than half the states in the nation.

"We are in a position -- projecting four weeks forward with a significant decline in the case rates, positivity rates -- we are anticipating still more decline in hospitalizations and more declines in ICUs, and that's why we're lifting that stay-at-home order effective immediately today," he said.

But he noted that people are still dying from the virus at high levels, saying the state was reporting 328 fatalities on Monday.

"Deaths continue to be significant, and this is a sober reminder about how deadly this pandemic remains, more so now than ever as we have battled our way through the most challenging surge," he said. "And now are seeing truly light at the end of that surge, at the end of the proverbial tunnel."

The governor also mentioned San Diego and Los Angeles counties were working with the state on a website and accompanying mobile app called MyTurn, which will help notify residents in those counties when it is their turn to receive a COVID-19 vaccination.

The website allows people to input their basic information and learn if they are currently available to receive a vaccination and, if so, allow them to scheduled a shot. People who aren't yet eligible can provide information on age and occupation and register to receive an email or text alert about when they will be able to schedule a shot.

Newsom said the system will also allow vaccine providers to input faster, more up-to-date information on the numbers of shots being administered, resolving what he called a frustrating lag time in reporting that often makes it appear fewer shots have been given.

"We believe it's the most comprehensive end-to-end system of its type in the United States," Newsom said. "But again, we acknowledge it's in its pilot phase.

"... It's not just a notification system as some other states have or a system for reservations just with state clinics, this is an end-to-end system across the spectrum -- bottom up, top down, providers -- a whole spectrum delivery system and a database that allows more immediate data to be transferred to the CDC," Newsom said.

So far, only San Diego County and Los Angeles County residents age 65 and over are able to schedule appointments.

Newsom said officials are aiming for a statewide launch of MyTurn in early February.

While the program is currently it a pilot phase, users can visit https://myturn.ca.gov for more information.

Copyright 2021 Scripps Media, Inc. City News Service contributed to this report. All rights reserved. This material may not be published, broadcast, rewritten or redistributed.