Symptoms may last weeks or months 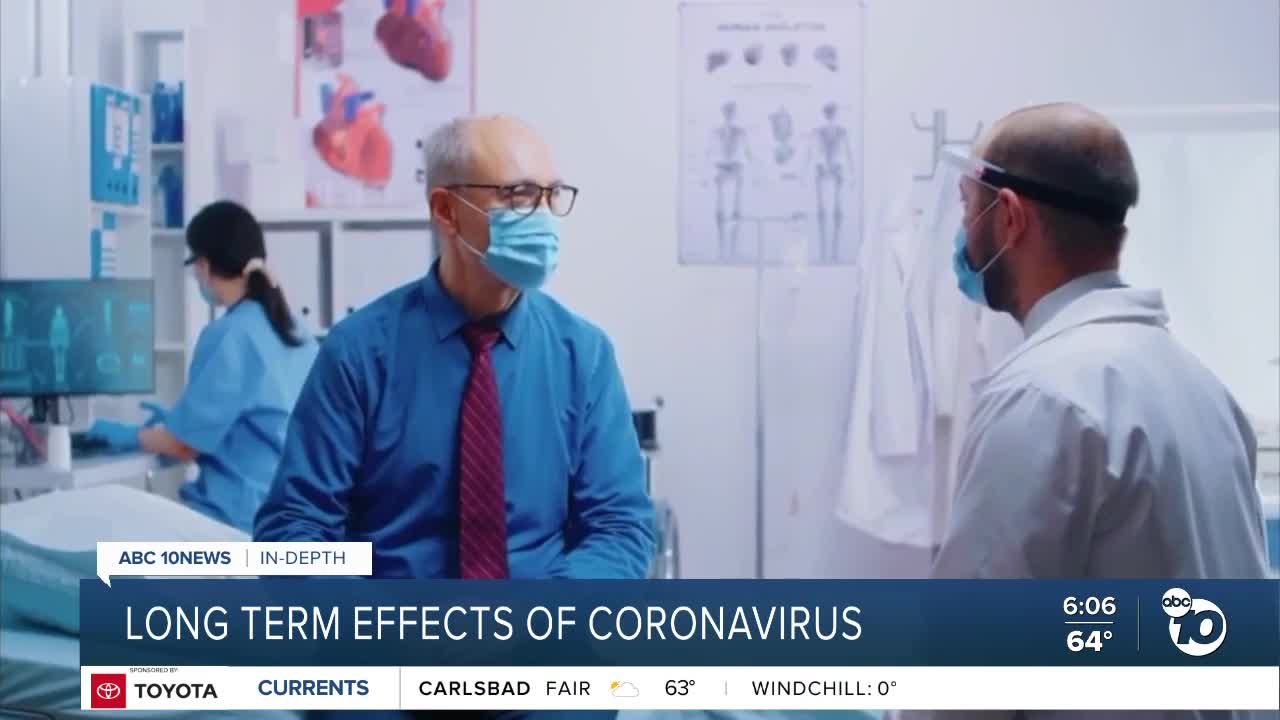 SAN DIEGO (KGTV) - Six months into the coronavirus pandemic, doctors around San Diego are starting to see the long-term effects of the disease.

They're finding COVID-19 can have a lasting impact on a person's health, even in mild cases.

"We're facing anew enemy that can present itself in a myriad of ways," says Dr. Eric Adler, a professor at UC San Diego's Cardiology Division and the Director of the Heart Transplant Program.

"We know this can take months to years," Dr. Adler says. "So, we're bracing ourselves for impact."

According to a study from the CDC, 35% of people with mild cases of COVID-19 "had not returned to their normal state of health when interviewed 2-3 weeks after testing."

The same study found that 26% of young people, 18-34 years old, also had symptoms more than two weeks after a positive diagnosis.

"We can expect it in a lot of cases, and in people that have been severely ill and hospitalized," says Dr. Abi Olulade from Sharp Rees-Stealy. "But it's concerning that we see it in people that had mild illness and also in young people that didn't have any preexisting conditions."

The CDC, the Mayo Clinic, and the World Health Organization have all released information about the long-term effects of COVID-19. Studies from all three found a range of symptoms in patients beyond the typical two-week recovery time.

The most common include fatigue, cough, shortness of breath, headache, joint pain, continued loss of taste or smell, congestion, and confusion.

Doctors who spoke to ABC 10News say they also see long-term damage or vital organs like the heart and lungs.

"Even after the infection is cured, even after the virus is gone and dead, there is still a lot of ongoing inflammation and scarring that happens in the lungs," says Dr. Amy Bellinghausen, with UC San Diego's Pulmonary Critical Care Department.

"Just like a scar on your skin, scars in your lungs take a long time to go away," says Dr. Bellinghausen.

It can also lead to long-term heart problems. Dr. Adler says patients need to be aware of heart issues like Myocarditis, an inflammation of the heart muscle.

According to the CDC, Myocarditis "might also explain some frequently reported long-term symptoms like shortness of breath, chest pain, and heart palpitations."

For Diana Berrent, the symptoms came back more than three months after getting over her initial fight with the coronavirus.

"It doesn't have a straight road, a straight trajectory towards recovery," says Barrent. "That's the biggest difference. The symptoms came and went. Every day it would be like reaching into a shopping bag and picking out a new set of symptoms."

Berrent started Survivor Corps, an online support and advocacy group for COVID-19 survivors. Her group, and others like it, have thousands of members sharing stories of recurring symptoms and problems with friends, family, and doctors taking them seriously.

Survivor Corps joined forces with the Indiana School of Medicine to do a comprehensive survey of COVID-19 survivors, to learn about their symptoms and long-term side effects. Barrent urges everyone who has had the disease to get involved.

"It's great that all this work is being put into the vaccine, but we also need therapeutics for people who have survived but are mere shadows of their former selves," she says. "We need to address this immediately. We are looking at another huge health crisis in this country."

Researchers are looking into similar inflammatory diseases, like SARS, ARDS, and Mono, for clues on what to expect years down the road.

In the meantime, doctors say the best thing patients can do is stay in touch with their primary care physician.