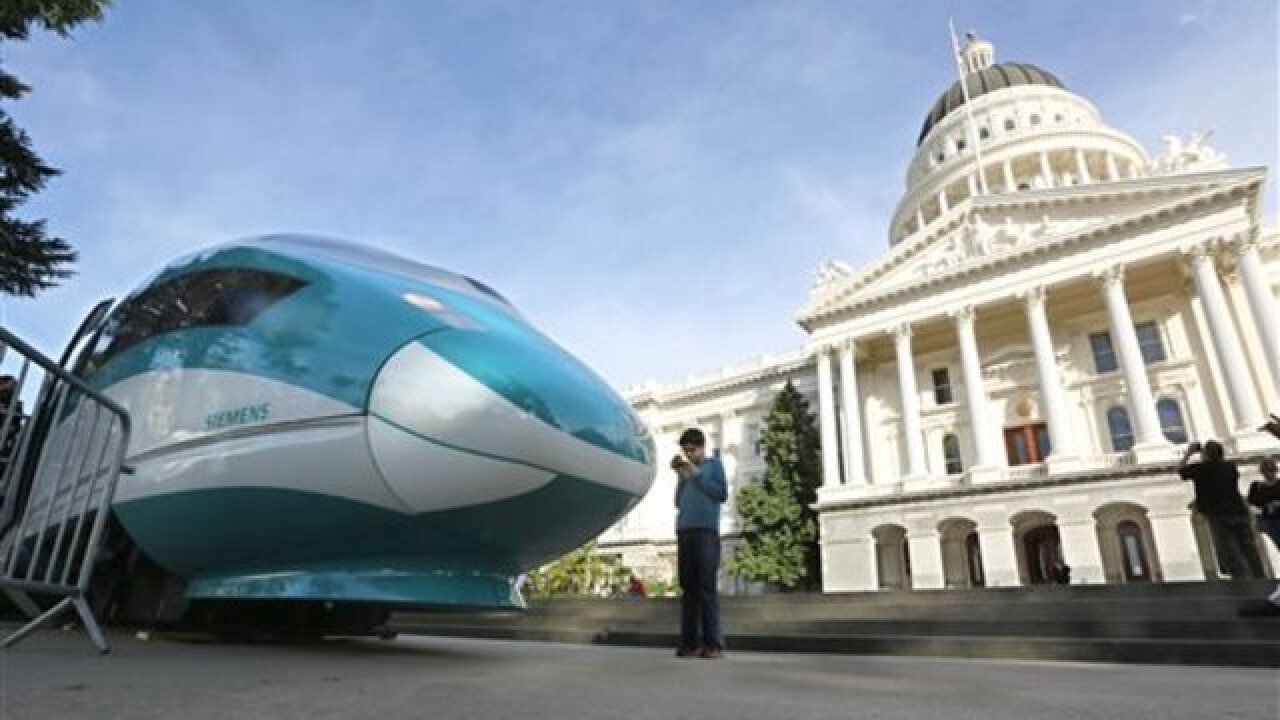 Rich Pedroncelli
<p>FILE - In this Feb. 26, 2015 file photo, a full-scale mock-up of a high-speed train is displayed at the Capitol in Sacramento, Calif. State officials will return to Sacramento Superior Court, Thursday, Feb. 11, 2016, to defend the project against critics who say high-speed rail cannot meet promises made to voters who approved a $9.9 billion bond measure to build it. (AP Photo/Rich Pedroncelli, File)</p>

The proposal comes from conservative radio host Carl DeMaio and others behind Proposition 6, which will ask voters this November if they want to repeal a 12-cent gas tax hike and increases in vehicle registration fees approved by lawmakers last year.

The 2020 plan is the next step in their effort. It would change the state Constitution to require revenue from existing gas taxes be spent only for road and bridge work, not transit, bicycle infrastructure or planning.

All other transportation-related revenue — such as taxes and fees on auto sales, insurance and vehicle registrations — would have to be spent on transit projects.

"The problem is not that Californians are not paying enough in taxes," DeMaio told reporters outside the state Capitol. "The problem is that the politicians are not spending the money we give them to fix our roads, to maintain our infrastructure."

A key criticism of November's Proposition 6 is that repealing the gas tax increase would eliminate funding for thousands of transportation projects without any money to replace it.

The new initiative would redirect money that goes into state and local general funds so that it must be spent on transportation.

"It's not a new idea," said Michael Quigley, executive director of the California Alliance for Jobs, which opposes DeMaio's initiatives. "It's an old Republican idea that the Legislature has previously rejected because of its impacts on health care, higher education and public safety funding."

California's Democratic-led Legislature passed the increase on fuel taxes and vehicle fees last year. It is expected to raise about $5 billion a year for highway and road improvements and transit programs.

RELATED: Up to 23,000 voter forms botched by California DMV

The gas tax is currently 41.7 cents per gallon, among the highest in the nation. This week, Californians are paying an average of $3.66 a gallon for gas, 80 cents more than the national average, according to AAA.

Republicans and Democrats agree the state needs a transportation overhaul but disagree on how to pay for it.

A Democratic state lawmaker from Orange County was recalled last year over his support for the fuel tax increase.

Those who support the tax increase contend it's critical to maintain the state's infrastructure. Opponents say gasoline has become too expensive and the Legislature should find other funding sources to cover the state's transportation needs.

Voters approved roughly $10 billion in bonds in 2008 to construct a high-speed train that would take passengers between Los Angeles and San Francisco in less than three hours. It was supposed to cost about $40 billion.

Now, the cost has ballooned to an expected $77 billion, with the completion date pushed back to 2033.

Construction is underway in the state's Central Valley agricultural heartland, but the high-speed rail authority does not have enough money to complete the first phase from Bakersfield to San Francisco. As of April, the project had between $20 and $28 billion in hand.

Its funding comes from the bonds, federal dollars and revenue from the state's cap-and-trade program that requires businesses to buy credits to emit greenhouse gases.

The proposed ballot measure would halt funding for high-speed rail, force the state to cease activities on it and use any unspent bond money to retire the debt. The federal money has already been spent. The initiative does not specify how the cap-and-trade money earmarked for rail would be redirected.

Some Democratic lawmakers have grown frustrated by the cost overruns and delays. Republican gubernatorial candidate John Cox says he would kill the project, while the Democratic candidate, Lt. Gov. Gavin Newsom, said he supports it but is concerned about its financing.