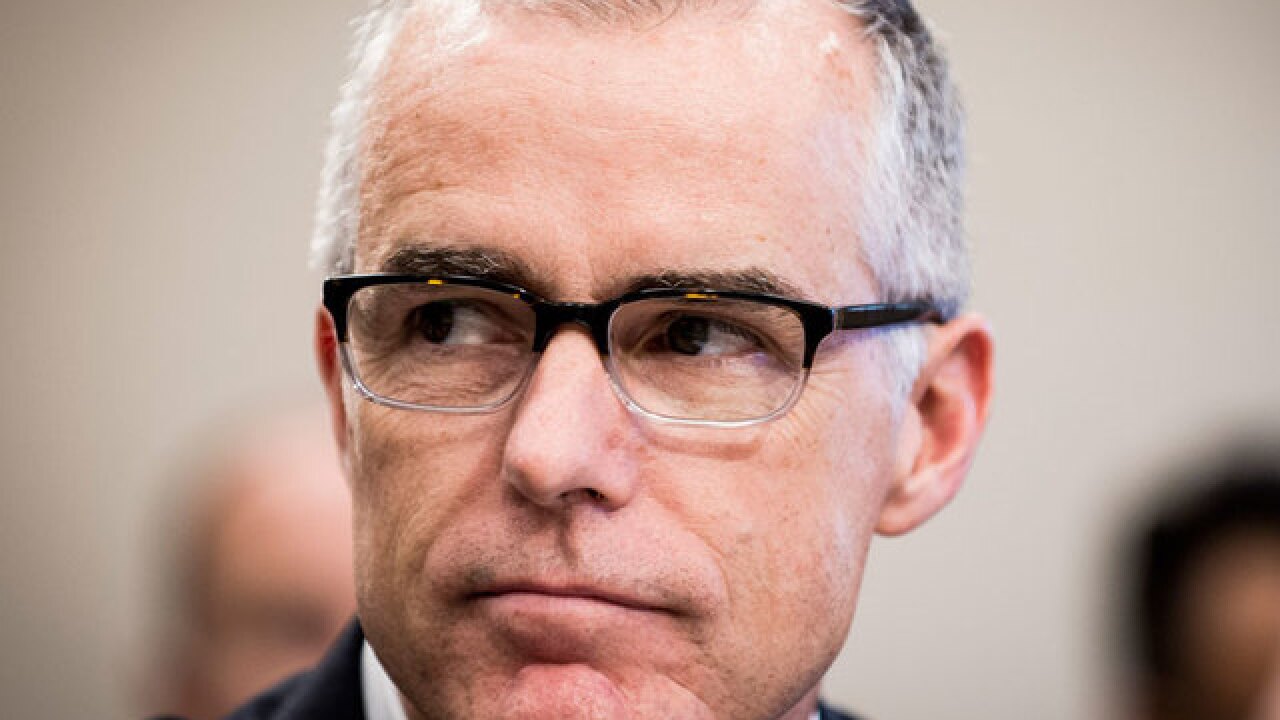 McCabe was in the news recently after the Washington Post reported President Trump asked McCabe -- then the acting FBI director -- who he voted for in the 2016 election.

McCabe became Trump's acting director of the FBI in May when Trump fired James Comey.

Trump is scheduled to address the nation at 6 p.m. Pacific time. The Democratic Party response will follow, led by Rep. Joe Kennedy of Massachusetts.

With the theme of the address "building a safe, strong and proud America," Trump will likely shine a light on his administration's accomplishments during its first year and lay out plans moving forward.

Trump's speech comes amid low approval ratings, battles with the media and continuing reports to emerge over his campaign's link to Russia during the 2016 election cycle.

Trump: "I wouldn't say I'm a feminist"
-- President Trump says he is not a feminist because he's not solely supportive of women, but rather of all people.

"No, I wouldn't say I'm a feminist," Trump told British journalist Piers Morgan when asked if he considers himself a feminist during an interview with British broadcaster ITV that aired Sunday. "That would be, maybe, going too far."

"I'm for women. I'm for men. I'm for everyone. I think people have to go out ... and they have to win," Trump said. "And women are doing great, and I'm happy about that."

Morgan asked Trump about his stance on the issue just days after thousands of marchers gathered in cities across the country to mark the one-year anniversary of the Women's March on Washington protesting Trump's presidency and stance on certain issues.

"You're always going to have marches," Trump said in response to a question about the movement by women. "The march, I guess, was a lot smaller than it was last year."

But at the same time, Collins said in an interview on CNN's "State of the Union" that she ultimately had faith in Deputy Attorney General Rod Rosenstein, who has direct authority over the probe.

"It probably wouldn't hurt for us to pass one of those bills," Collins said, adding, "There are some constitutional issues with those bills, but it certainly wouldn't hurt to put that extra safeguard in place given the latest stories, but again, I have faith in the deputy attorney general."

Collins' comments came in response to news that last June Trump moved to fire Mueller, and that White House counsel Don McGahn refused the order. Collins said Sunday she understood the episode to be Trump having a "bad idea."

The committee, which has posted a business meeting for 5 p.m. ET, has not yet said if it plans to vote Monday to release the memo spearheaded by Chairman Devin Nunes. A vote was expected as soon as this week.

The meeting is scheduled for "consideration of pending committee business and other matters." A committee spokesman did not immediately respond to requests for comment.

The Nunes memo alleges that the FBI abused the FISA surveillance law over its use of the opposition research dossier on Donald Trump and Russia as part of the case to obtain a FISA warrant for former Trump campaign foreign policy adviser Carter Page. It cites the role of Deputy Attorney General Rod Rosenstein and deputy FBI Director Andrew McCabe for their roles in overseeing aspects of the investigation, according to a source briefed on the matter.