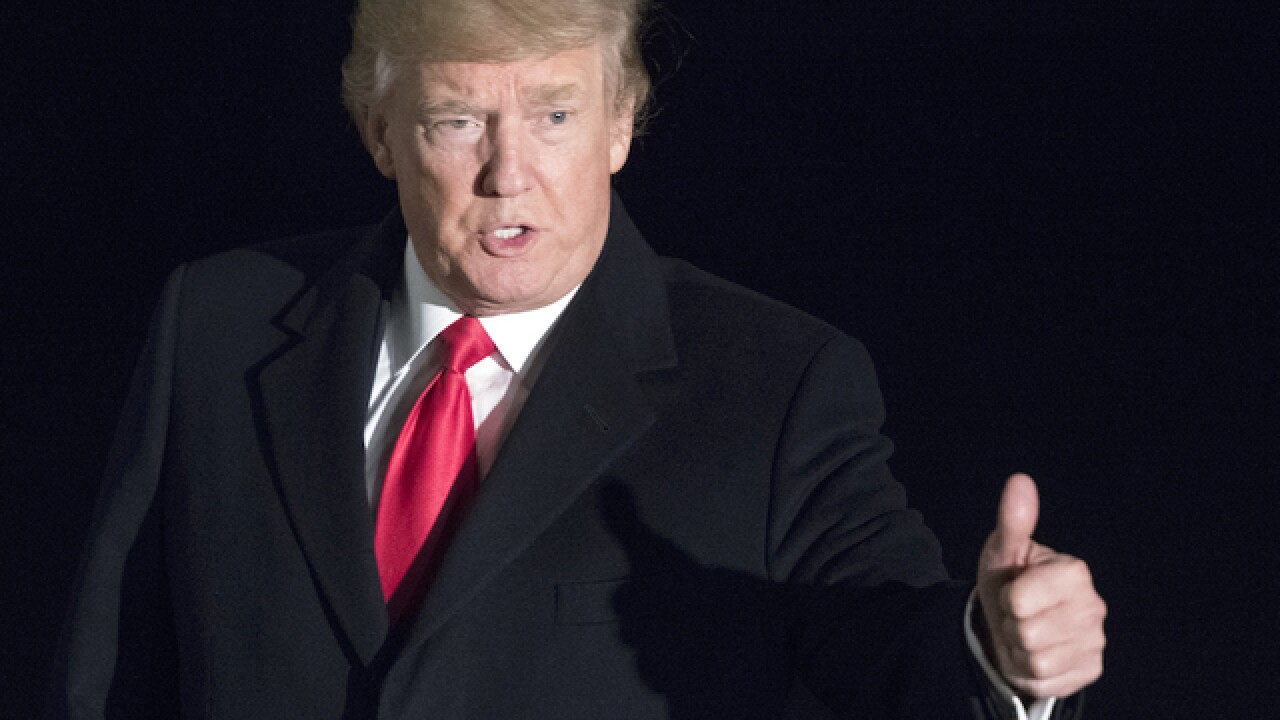 President Donald Trump says he is not a feminist because he's not solely supportive of women, but rather of all people.

"No, I wouldn't say I'm a feminist," Trump told British journalist Piers Morgan when asked if he considers himself a feminist during an interview with British broadcaster ITV that aired Sunday. "That would be, maybe, going too far."

"I'm for women. I'm for men. I'm for everyone. I think people have to go out ... and they have to win," Trump said. "And women are doing great, and I'm happy about that."

Morgan asked Trump about his stance on the issue just days after thousands of marchers gathered in cities across the country to mark the one-year anniversary of the Women's March on Washington protesting Trump's presidency and stance on certain issues.

"You're always going to have marches," Trump said in response to a question about the movement by women. "The march, I guess, was a lot smaller than it was last year."

Trump was also questioned about his Twitter usage during the interview, and explained that he really is the one sending the tweets seen across the world.

"I do, I do," Trump said when asked if he is the one who actually sends the tweets out from his phone. "I also give it to people and sometimes I'll have, I had one case where a lawyer did a tweet."

"Perhaps in bed, perhaps sometimes at breakfast and lunch," Trump said about the timing of the messages. "Generally speaking during the early morning I can do that then I am busy during the day. I sometimes just dictate out things to my people."

He told Morgan that he prefers to call it social media as opposed to tweeting, and that if he didn't have that kind of form of communication, he wouldn't be able to defend himself without having to hold news conferences all day long.

During the interview, Morgan pressed Trump to offer an apology for his November retweets of three inflammatory videos posted by the deputy leader of ultra-nationalist political group Britain First, purportedly showing Muslims assaulting people and, in one video, smashing a statue of the Virgin Mary.

"I don't know who they are. I know nothing about them," Trump said. "It was done because I am a big believer in fighting radical Islam terror, this was a depiction of radical Islamic terror."

"If you're telling me they're horrible people, horrible racist people I would certainly apologize if you would like me to do that," Trump went on to say. "I am the least racist person that anybody is going to meet. Certainly I wasn't endorsing anybody."

The tweets caused an uproar in late 2017, and delight for Britain First and other far-right groups. They also sparked a rare rebuke from the British government, with a spokesman for Prime Minister Theresa May saying Trump was "wrong" to share the videos.

Relationship with the UK

Throughout the interview, Trump repeatedly stated his love for the United Kingdom, which comes in the midst of rumored turmoil between the United States and Great Britain.

"And I support you militarily very much. I mean, we will come to your defense if anything should happen, which hopefully will never happen. But I am a tremendous supporter of the UK."

Trump also said he would have negotiated Brexit differently, but acknowledged that May is doing a good job.