COVID-19 case rates are increasing in US again, this time fueled by spike in Midwest

After several weeks of falling case numbers, Johns Hopkins reports that the spread of COVID-19 is again on the rise in the U.S. — and this time, the hot spots are shifting toward the Midwest.

Following lockdown measures prompted by the virus' arrival in the U.S. in the spring, the spread of COVID-19 reached all-time highs in the summer months. On July 16, the U.S. recorded more than 77,000 confirmed cases of the virus — the most the country has been recorded in a single day since the pandemic began.

According to Johns Hopkins, transmission rates slowed throughout July and August as states like Texas and Arizona re-instituted more stringent lockdown procedures. By mid-September, case rates in the U.S. slowed to about 34,000 a day.

However, in the last week or so, Johns Hopkins reports that the case rates have begun to spike again — and that several Midwest states are reporting their highest case rates of the pandemic. 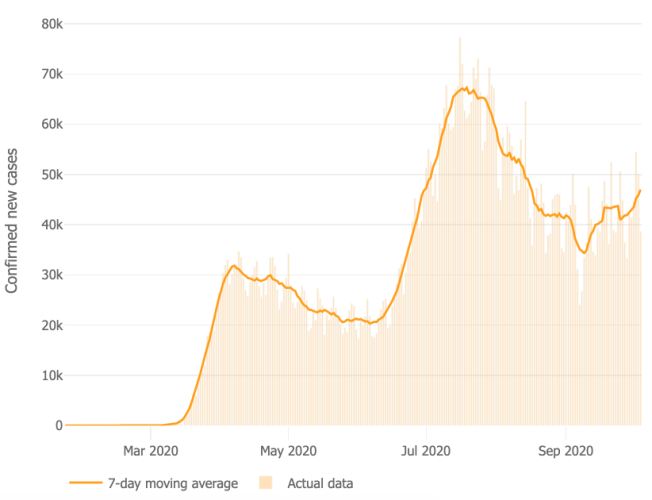 Among those states is Wisconsin, which saw new cases jump from about 600 a day to more than 2,600 a day through the month of September. On Sept. 22, Gov. Tony Evers declared a public health emergency following several outbreaks on the state's college campuses.

Last week, Evers urged many in the state to continue to wear masks and keep social distance.

“There are many across the state who aren’t taking this seriously, who aren’t wearing masks, who aren’t limiting their travel, who are going about their daily lives as if though it is November of 2019,” Evers said.

Kentucky is also setting state records for new case rates. According to Scripps station WLEX in Lexington, 6,318 Kentuckians contracted the virus last week — a one-week record. On Monday. Gov. Andy Beshear is expected to step up enforcement in requiring masks and face coverings in public.

Indiana, Minnesota, Missouri, Nebraska, South Dakota, North Dakota, Montana and Wyoming are among the other Midwest states experiencing their highest new case rates of the pandemic.

Currently, the U.S. is experiencing the second-highest amount of daily case increases in the world, trailing behind only India — who has new daily case figures drop from about 90,000 a day to about 60,000 a day in the past few weeks.