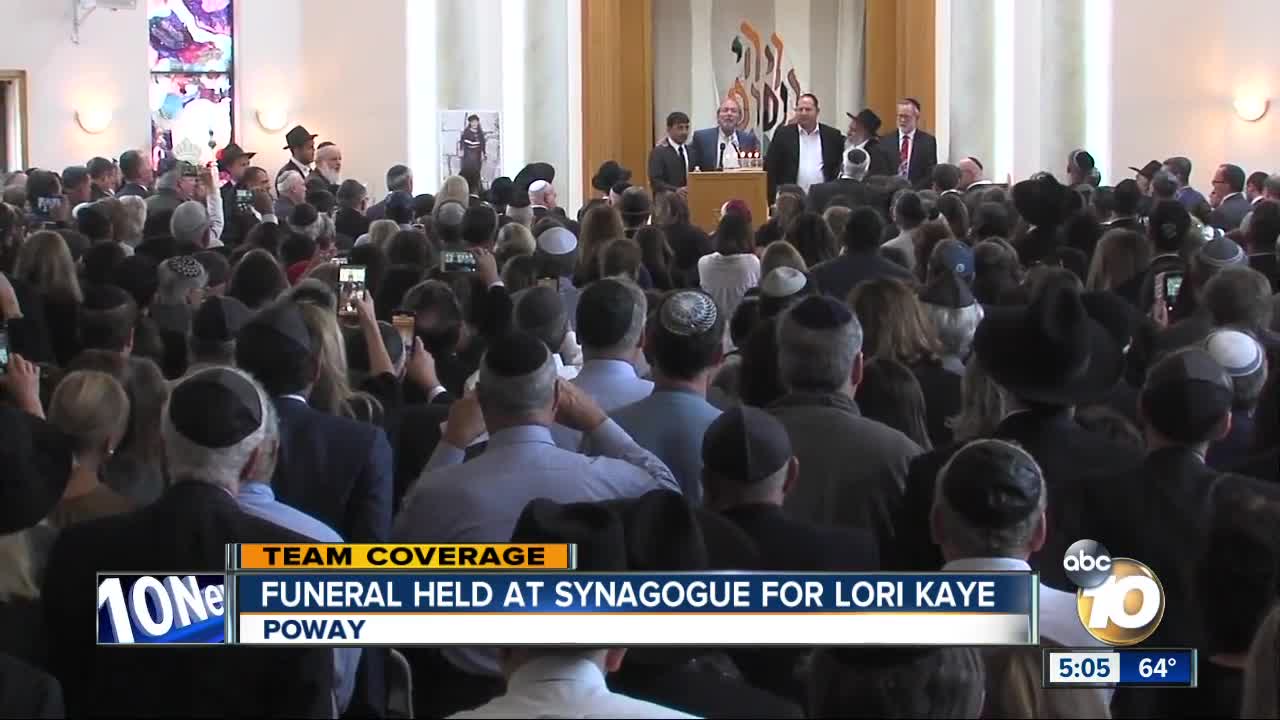 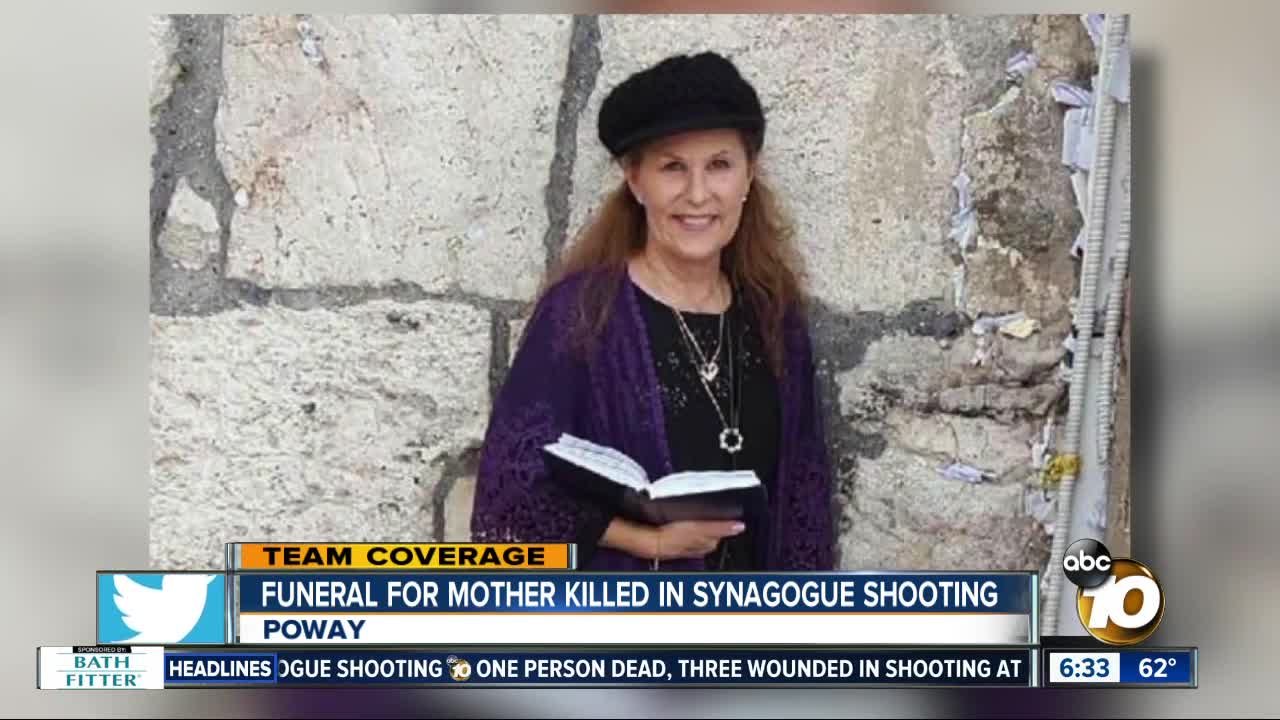 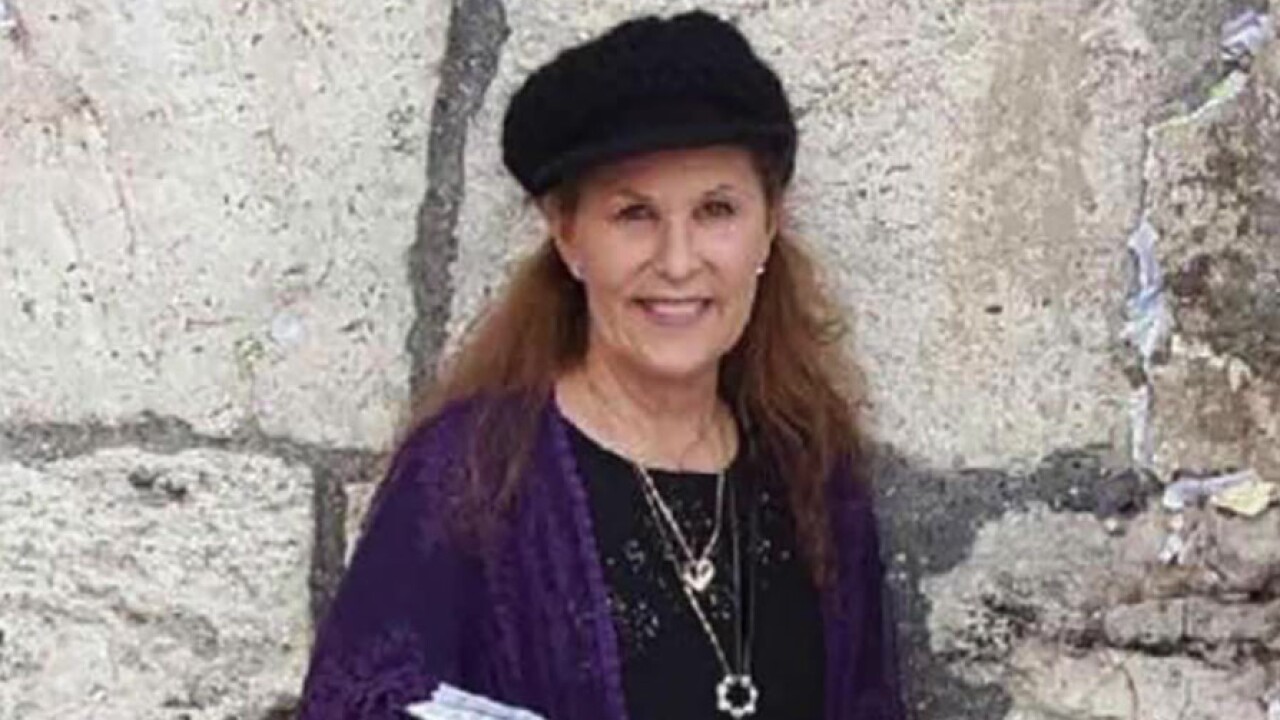 POWAY, Calif. (CNS) - Funeral-goers packed a Poway synagogue to remember Lori Kaye, the woman who was gunned down inside the Chabad of Poway Saturday morning.

Leaders of the synagogue joined Poway Mayor Steve Vaus at the podium to sing "God Bless America". Later in the service, Rabbi Yisroel Goldstein spoke about Kaye, who he previously described as a decades-long friend who helped secure the original loan for the synagogue.

Watch the full funeral in the player below:

Goldstein -- who lost his right index finger in the Saturday shooting and spent hours in surgery as medical personnel worked to save his other index finger -- told reporters that Kaye was at the temple with her husband and daughter on Saturday to honor her mother, who recently died.

He said he had just been speaking to Kaye when the shooting started.

"I walked into the banquet hall to wash my hands, and I walked two, three footsteps when I hear a loud bang," Goldstein said.

He said he turned around to come face-to-face with the shooter -- later identified by authorities as 19-year-old John Earnest of Rancho Penasquitos -- who he said was wearing sunglasses.

Goldstein told reporters the shooter's gun "miraculously" jammed, and he was chased out by a Border Patrol agent who had recently "discovered his Jewish roots" and began making the three-hour drive from El Centro to attend services at the orthodox congregation.

Earnest is being held without bail at San Diego Central Jail. He's scheduled to be arraigned at 1:30 p.m. Wednesday on one count of murder and three counts of attempted murder.

The San Diego County Sheriff's Department said on Sunday it's not believed Earnest was part of an organized group.

"We believe he acted alone and without outside support in carrying out the attack," the Sheriff's Department said in a statement. "We are continuing to explore every investigative avenue to bring out all the facts in the case."

Goldstein said other man injured in the shooting, 34-year-old Almog Peretz, suffered a gunshot wound while shepherding children to safety. Peretz, who the rabbi said is an Israeli military veteran, has been visiting the U.S.

The young girl hurt in the shooting, named Noya, was hit by shrapnel.

Both were released from hospitals and were expected to survive.

Noya's father, Israel, told Israel Radio that he had moved his family to California a number of years ago after their home absorbed several rocket shots from the Gaza Strip over the years, injuring him once.

"We came from fire to fire," he said. "It can happen anywhere. (But) we are strong."

Earnest -- reportedly on the Dean's List at Cal State San Marcos -- apparently posted an "open letter" online shortly before the shooting, taking credit for both the Poway synagogue shooting and a suspected arson fire on March 24 at the Islamic Center of Escondido. The letter makes multiple anti-Semitic references and racist comments.

"We are dismayed and disheartened that the alleged shooter now in custody is a CSUSM student," Haynes said. "CSUSM is working collaboratively with the San Diego County Sheriff's Department to assist and gain more information.

"We extend our deepest condolences to all of the victims, their families, friends and our entire community. We share your grief," Haynes said. "This despicable act is entirely against our values as a university. We stand in solidarity with the Jewish community and reject the rhetoric of divisiveness that feeds hatred."

Gore said deputies served warrants for Earnest's home and car as well as the synagogue.

Goldstein, the rabbi, said on Sunday he spoke to President Donald Trump by phone, and described the call as comforting.

He called on the Jewish community to show up to temple this weekend to show solidarity with the congregation and the shooting victims.

"This Friday night go to your synagogue," Goldstein said. "We need to fill up this room. We need to show them that terrorism, evil, will never prevail."