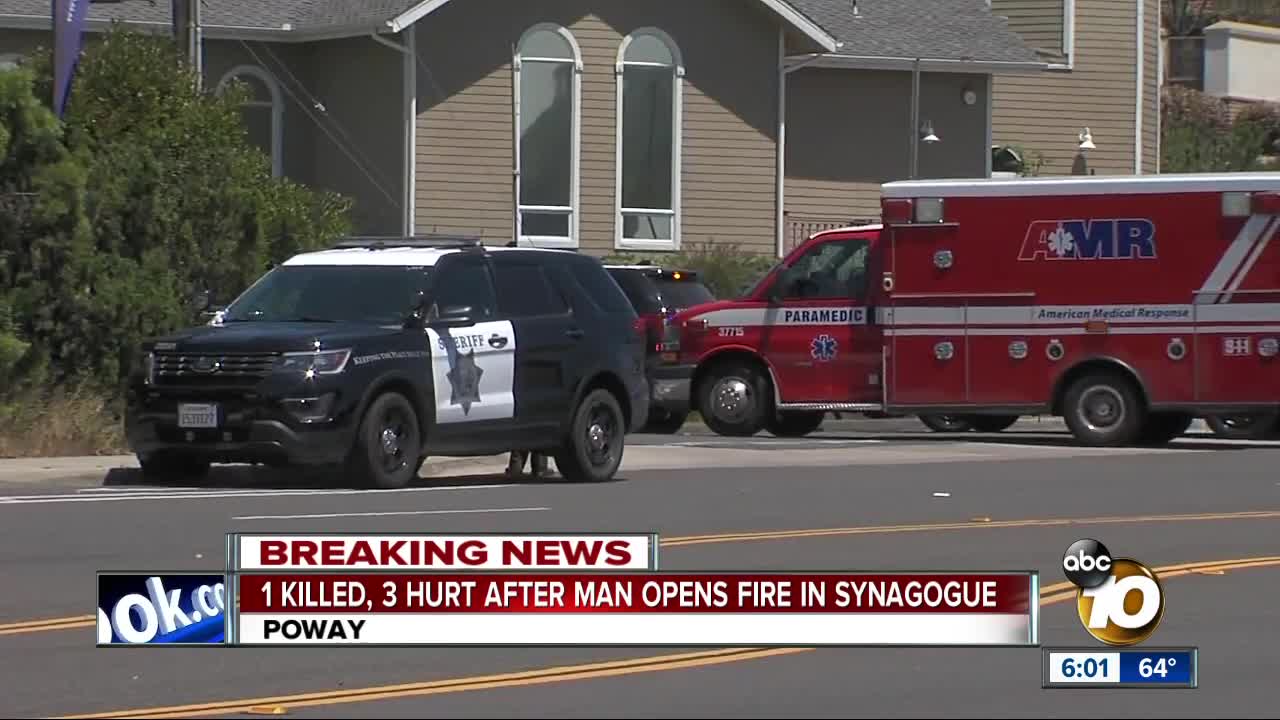 Chabad of Poway was honoring Passover. 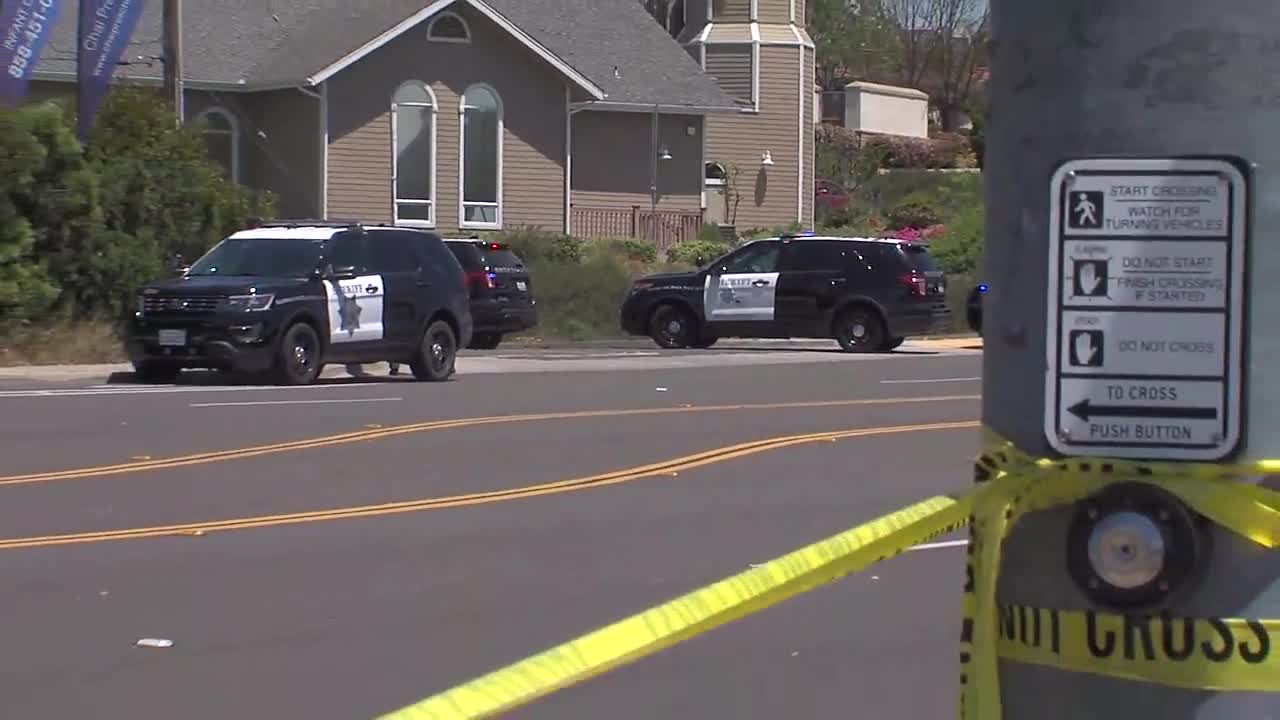 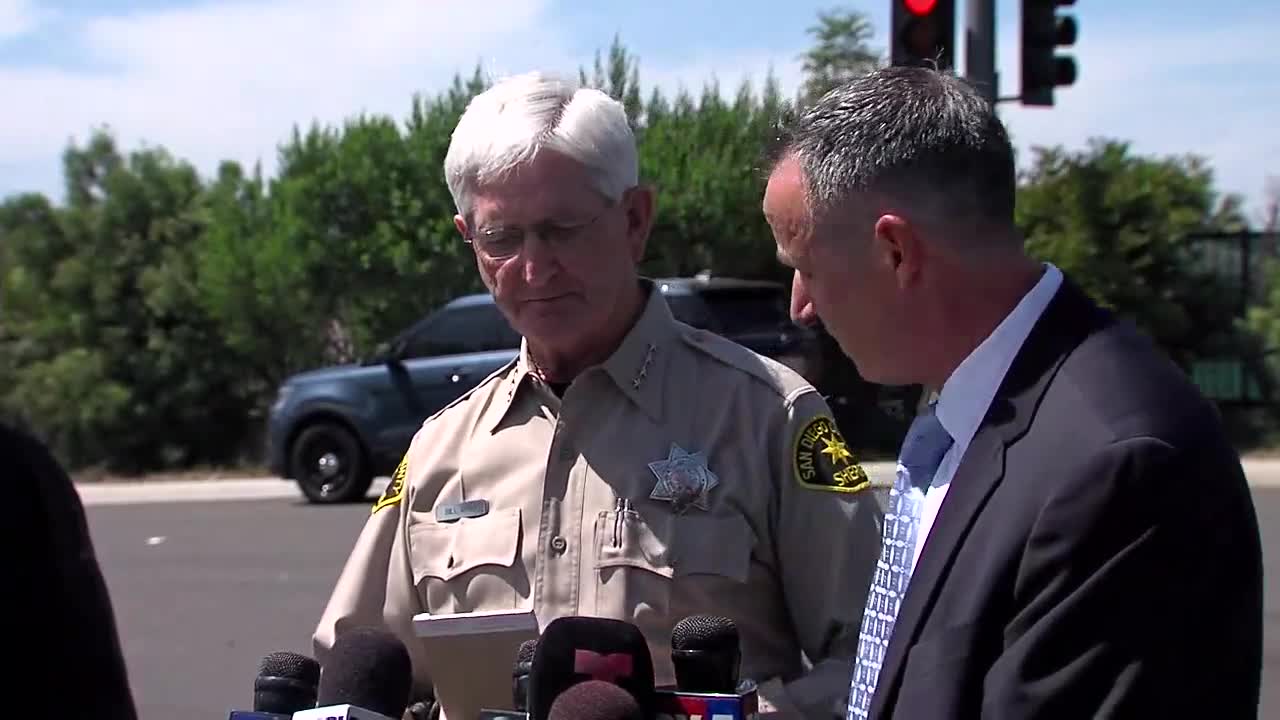 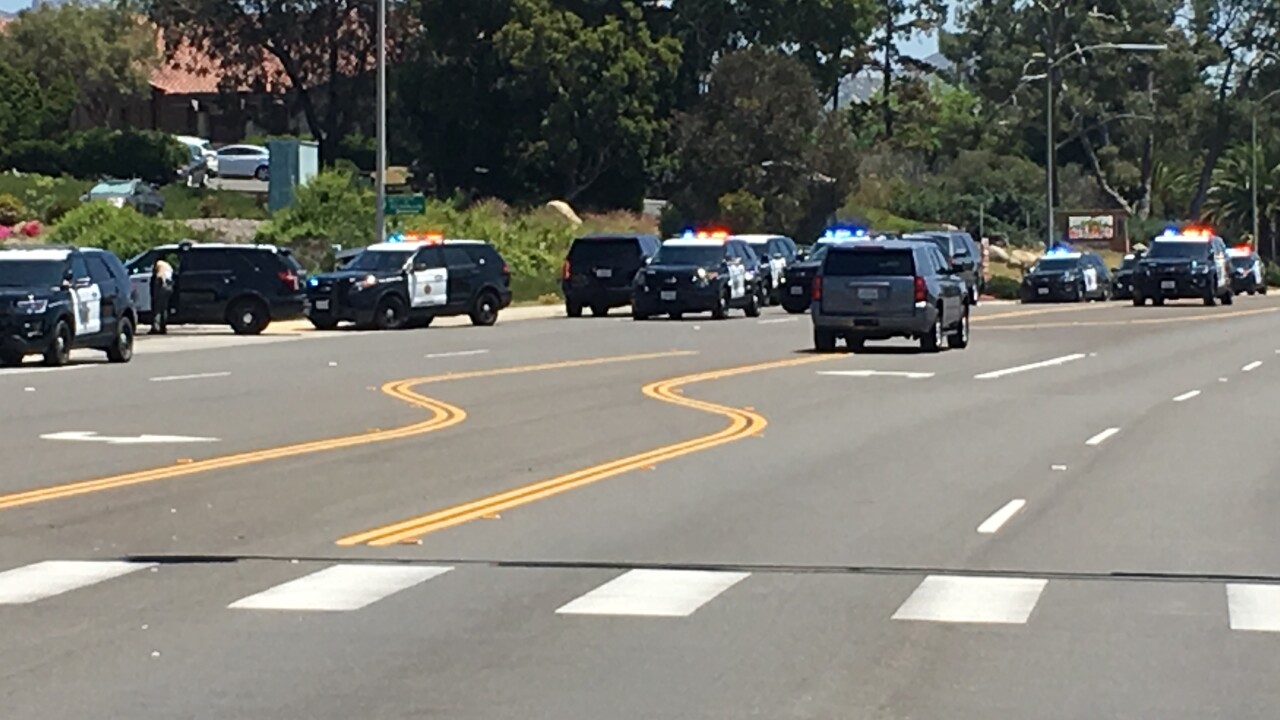 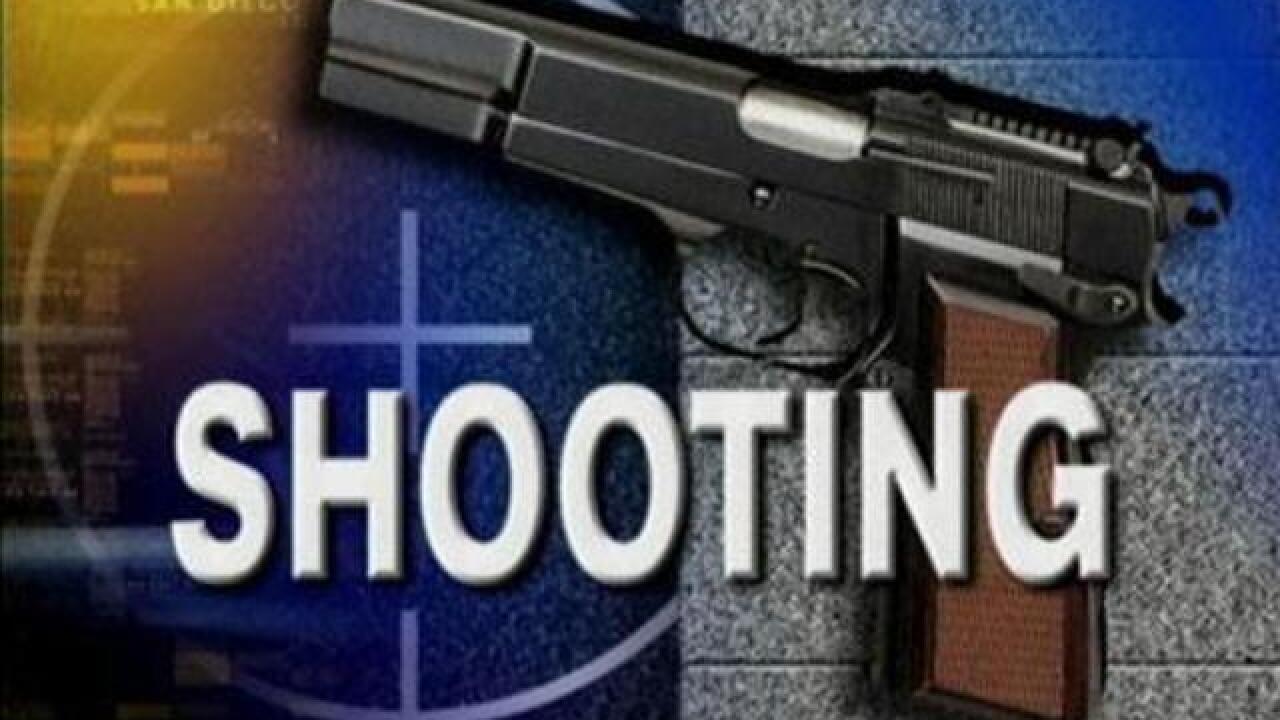 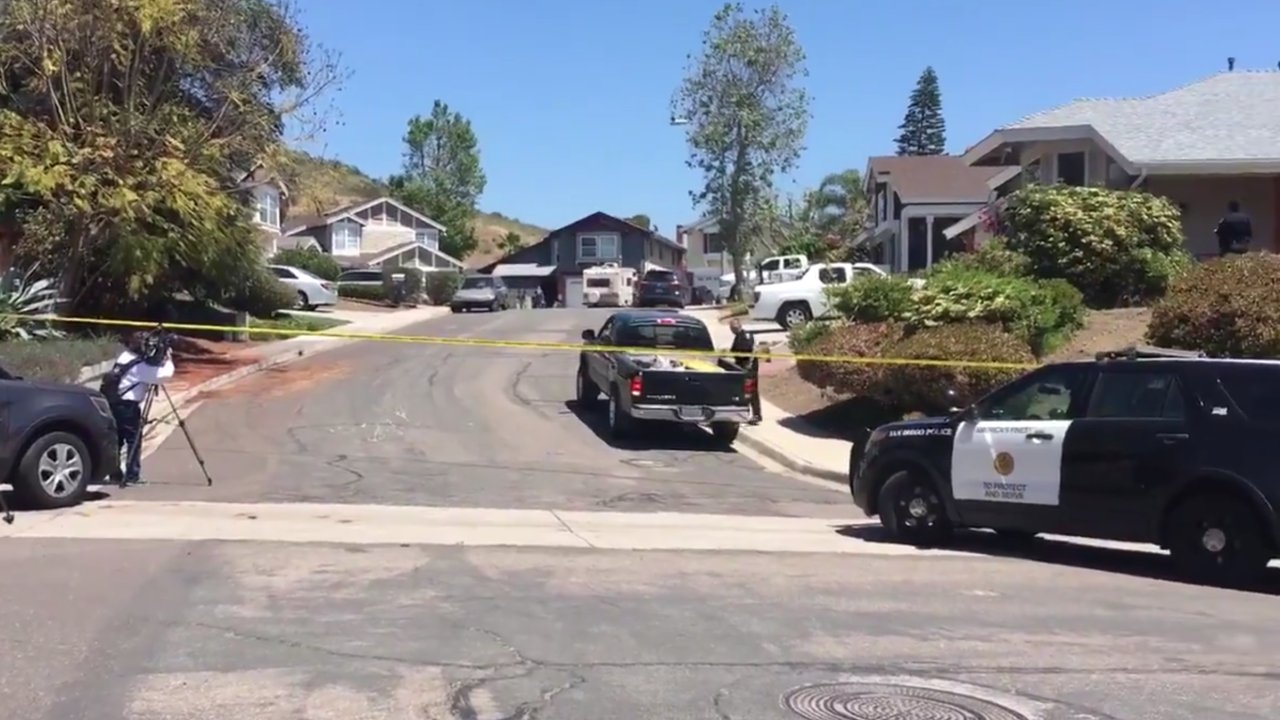 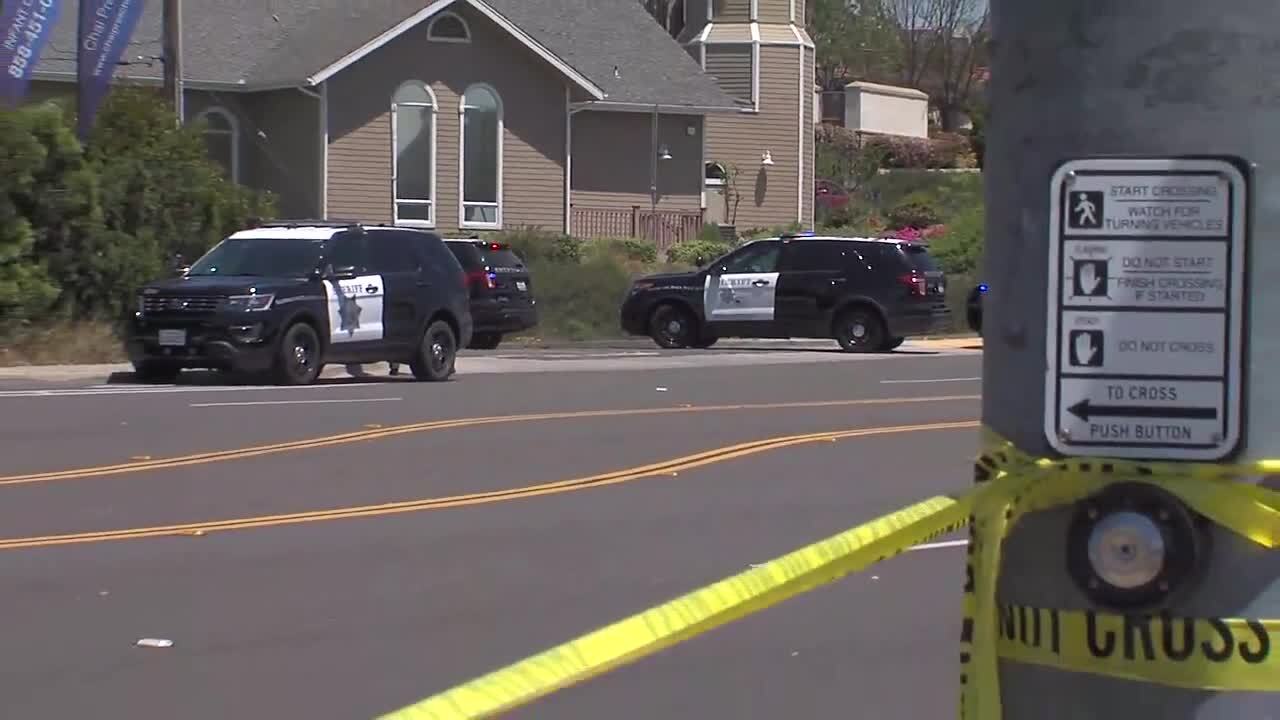 POWAY, Calif. (KGTV) -- San Diego County Sheriff's deputies are investigating a shooting at a synagogue that left one person dead in Poway on Saturday afternoon.

Poway Mayor Steve Vaus confirmed one person was killed in the shooting. A friend and witness to the shooting identified the victim as Lori Kaye, 60.

The incident was reported at the Chabad of Poway located at 16934 Chabad Way sometime before 11:30 a.m., San Diego County Sheriff Bill Gore said.

One witness told 10News that he heard three shots then dropped to the floor for cover. He said he heard a total of 15 shots and that the shooting lasted between 20-30 seconds.

An off-duty Border Patrol agent was inside the synagogue during the shooting. The agent followed the suspect when he tried to flee the scene and opened fire, hitting the gunman's vehicle.

It's unknown how many people were inside the synagogue at the time of the shooting.

At least three people were wounded in the shooting: one juvenile female and two adult males. All were transported to Palomar Hospital in Escondido and are in stable condition.

One of the victims, Rabbi Yisroel Goldstein, suffered hand injuries and was expected to lose his index finger, a doctor said. A witness told 10News that despite his injuries, the rabbi was trying to calm worshippers and the gunman.

A canine officer en route to the scene overheard California Highway Patrol scanner traffic for the suspect who had called in to CHP to report the crime, Gore said.

At Rancho Bernardo Road west of I-15, the officer saw the suspect, who jumped out of his car with his hands up, Gore said. There was a rifle on the front seat of the car, according to the sheriff.

Investigators surrounded the home of the teen's father in Rancho Penasquitos after the arrest.

Deputies, San Diego Police, and FBI agents remained at the synagogue to interview more than 100 witnesses.

The Family Assistance Center at Poway High, 15500 Espola Road, was designed as the meeting place for synagogue goers who got separated during the shooting. It closed Saturday afternoon.

Chabad of Poway was hosting its Passover Holiday Celebration which was scheduled to begin at 11 a.m., according to an event announcement. The celebration was to end at 7 p.m. with a final Passover meal.

Saturday's shooting comes six months after nearly a dozen people were shot and killed in a Pittsburgh synagogue. Robert Bowers is accused of gunning down a total of 18 worshippers, killing 11 of them, at the Tree of Life synagogue on October 27, 2018.

STAY WITH 10NEWS FOR UPDATES ON THIS DEVELOPING STORY.