SAN DIEGO (CNS) - For yet another week, San Diego County avoided the fate of dropping into the dreaded purple tier of California's coronavirus monitoring system, with an adjusted case rate of 6.5 new daily COVID-19 cases per 100,000 population.

While the county's unadjusted case rate is 7.4 per 100,000 -- enough to be in the most restrictive purple tier, which has a floor of 7 per 100,000 -- the high volume of tests the county is able to perform daily allows for an adjustment from the state. This adjustment has kept the county in the red tier for several weeks, saving it from having to shut down nearly all non-essential indoor businesses.

The state data, which is updated every Tuesday, reflects the previous week's case data to determine where counties stand in the state's four-tiered reopening system. 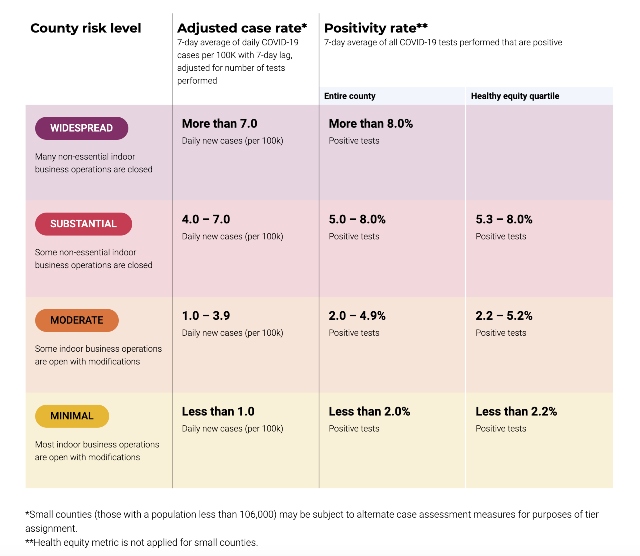 San Diego County did show modest improvement, dropping 0.4 from last week's unadjusted case rate of 7.8. The testing positivity rate continued an upward trend, rising 0.2% from last week to reach 3.5%, but remains low enough for this metric to remain in the orange tier. If a county reports statistics meeting metrics in a higher tier for two consecutive weeks, it will move into that more restrictive tier for a minimum of three weeks.

The state's health equity metric, which looks at the testing positivity for areas with the lowest healthy conditions, dropped from 5.5% to 5.1% and entered the orange tier. This metric does not move counties backward to more restrictive tiers, but is required to advance.

Five men and two women died between Oct. 22 and Oct. 25, with one death occurring July 19. Their ages ranged from early 60s to mid-80s. All had underlying medical conditions.

All students at San Diego State University, meanwhile, remained under a stay-at-home advisory announced Thursday. The advisory began at 6 p.m. Friday and will run through Nov. 2 at 6 a.m. University officials said the move was made to discourage students from participating in Halloween events where physical distancing cannot be done. Students are advised to stay home unless they have an essential need.

As of Tuesday afternoon, the university has had a total of 1,257 COVID- 19 cases since the fall semester began, including 421 among students living on-campus, 807 among students living off-campus, 16 among faculty and staff and 13 among "visitors" -- defined as someone who has had exposure with an SDSU- affiliated individual.

UC San Diego announced Monday night that, as a result of viral shedding, it had detected COVID-19 in wastewater in the Revelle College area between 11:30 a.m. Saturday and 9:45 a.m. Monday.

The virus is shed from the gastrointestinal tract and is present in feces early in the infection. UCSD has the ability to identify the virus in wastewater, even before someone tests positive.

The college advised anyone who used the restroom near the Revelle College area between those dates and times to get tested for COVID-19 out of an abundance of caution.

According to the district's COVID-19 safety dashboard, it has recorded 10 cases since Sept. 8, with six of those coming after Oct. 20.

The VUSD Board voted Tuesday to shut down at least one campus for two weeks starting Thursday as a result of the rising cases. At least 400 students and nearly two dozen staff members have been ordered to quarantine.