SAN DIEGO (CNS) - The clock is now ticking for San Diego County, as recently released COVID-19 data showed one of the two metrics the state monitors is now flagged as "widespread," which could lead to business restrictions and renewed closures if it continues for another week.

San Diego County's state-calculated, unadjusted case rate is 7.9 new daily cases per 100,000 population. The testing positivity percentage is 4.5%. Should the county have a case rate higher than 7.0 next week, it could be moved into the purple tier, and more state-imposed restrictions could be implemented on recently opened businesses. Many nonessential indoor business operations could be shuttered.

The county is currently in the red tier, along with Orange, San Francisco, Marin, Santa Cruz and Santa Clara counties. Most of the rest of Southern California is in the purple tier. The state system has four tiers and assesses counties weekly, with reports scheduled each Tuesday. 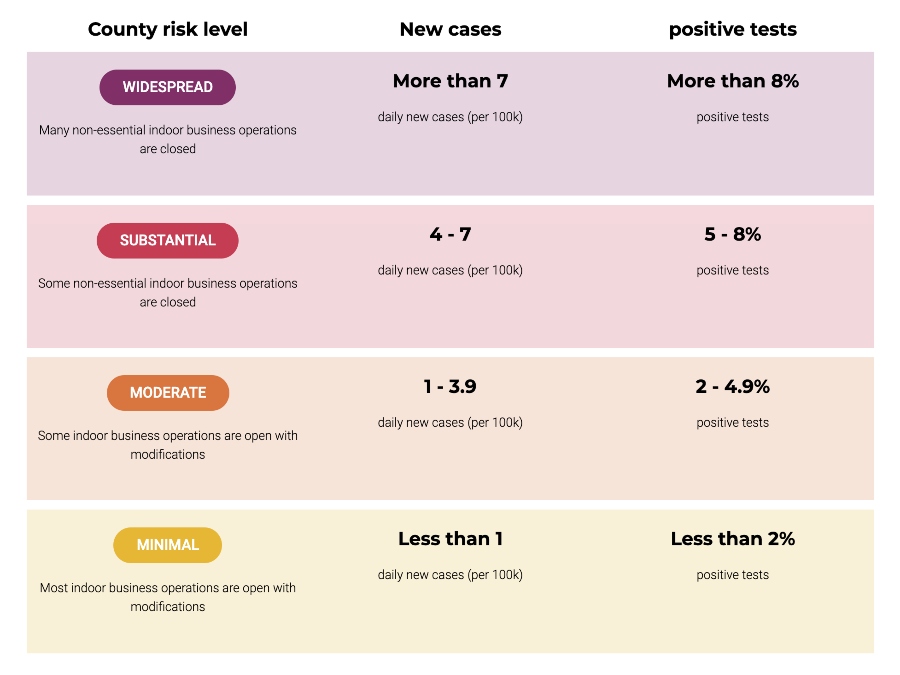 Six men and three women died between Sept. 7 and Sept. 14, and their ages ranged from early 50s to mid-90s. All had underlying medical conditions.

Of the 5,969 tests reported Tuesday, 5% returned positive, moving the 14-day rolling average of positive tests to 4.4%, well below the state's 8% guideline. The seven-day average number of tests performed in the county is 7,254.

The number of community outbreaks remains above the county's goal of fewer than seven in a seven-day span. A community setting outbreak is defined as three or more COVID-19 cases originating in the same setting and impacting people of different households in the past 14 days.

San Diego State University reported 23 more positive cases of the illness in its student body Tuesday, even as it is ramping up its COVID-19 testing protocols through a new random surveillance testing program which requires all students living on campus to be tested for the virus.

The surveillance program will begin Wednesday, with around 500 students being tested every day through Saturday, then starting again Monday. All students living in SDSU residence halls and apartments will be assigned testing slots at either the Student Health Services Calpulli Center, or the HHSA testing location at the Parma Payne Goodall Alumni Center.

Students will be notified of their assigned testing window, along with instructions on what to do, through their SDSU email address.

The university has reported 676 students testing positive for the illness, the majority of whom live off campus.

"We're hearing people act like a negative test is a hall pass to do whatever you want," she said Tuesday. "It's not. A test is just a snapshot of a particular moment."

She said a person could become infected on their way home from receiving a test, and that it's important to maintain constant vigilance.

The university has not received any reports of faculty or staff who have tested positive, SDSU health officials said, nor have any cases been traced to classroom or research settings.

A comprehensive outreach strategy to expand testing access for Latino residents and other communities hardest hit by the COVID-19 pandemic started Monday in downtown San Diego with the opening of a testing site at the Mexican Consulate at 1549 India St.