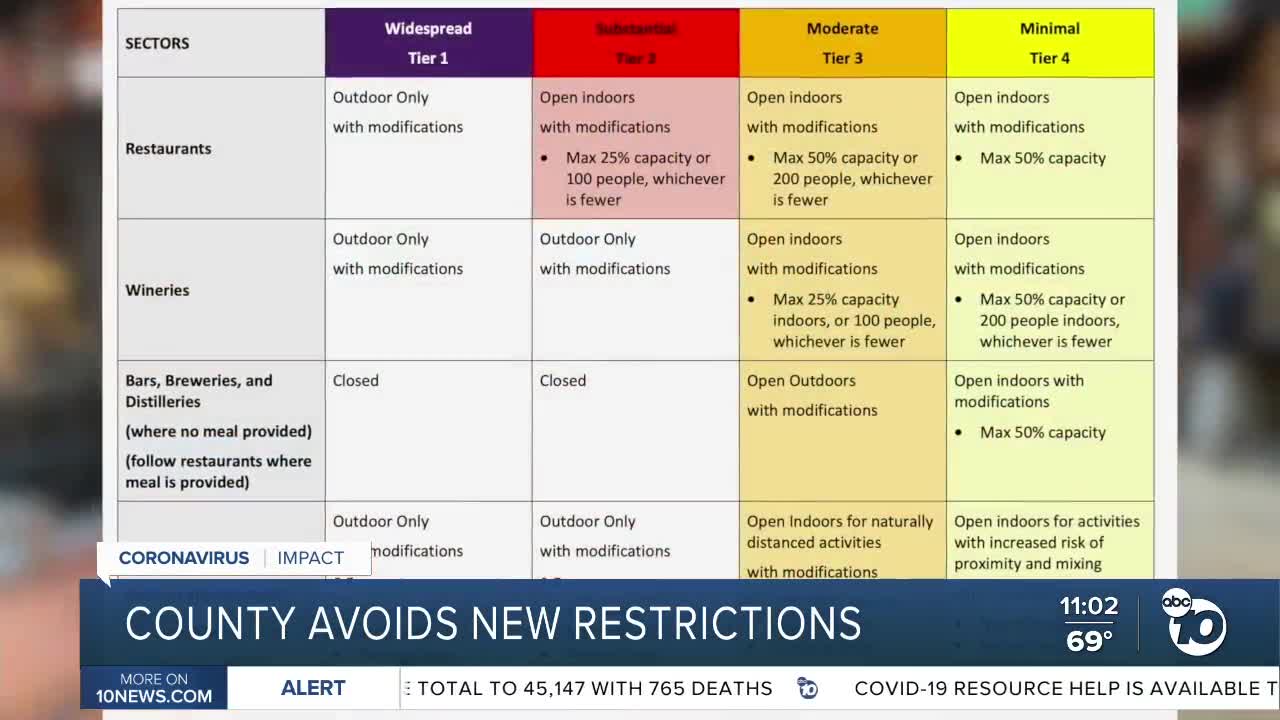 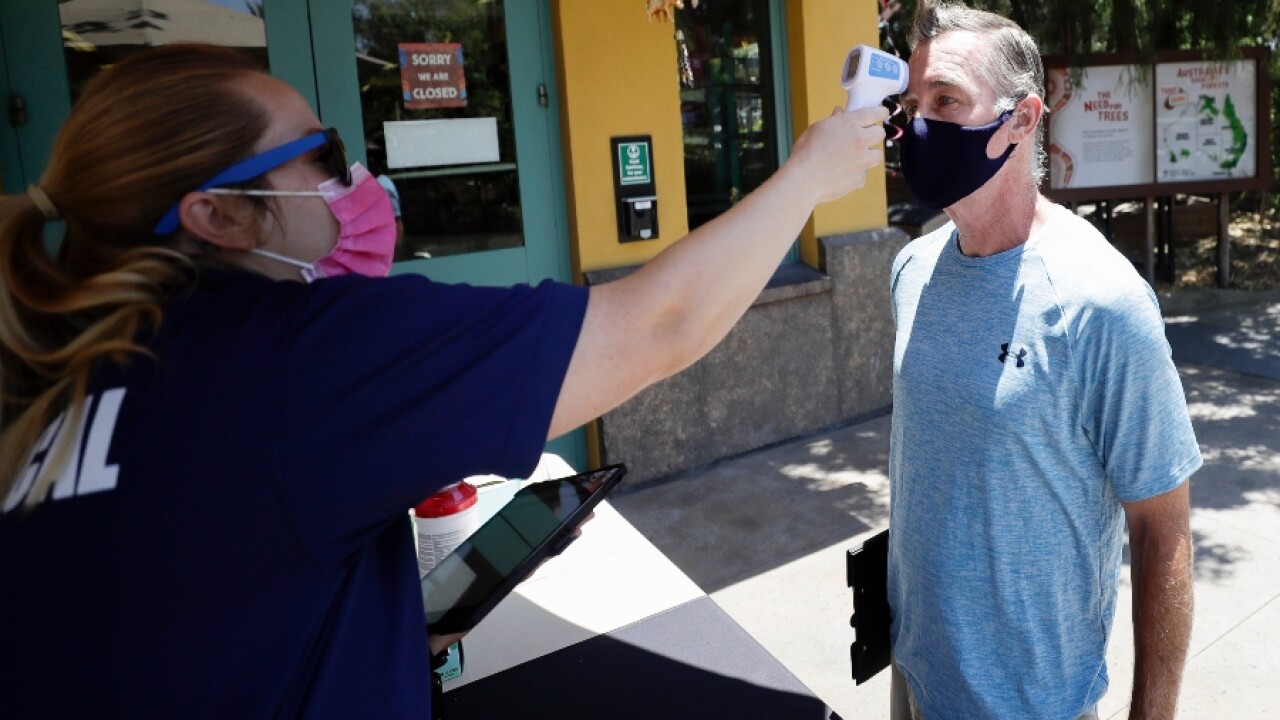 The county is reporting 6.9 new daily cases per 100,000 population, just .1 away from the dreaded "purple" tier, the state's most restrictive. San Diego County is also posting a 3.8% positive testing rate for the novel coronavirus -- well within the lower "orange" guideline of the state's four- tier reopening system.

This news comes as somewhat of a surprise after increasing COVID-19 numbers appeared to set the county on a path toward slipping into that most restrictive tier -- which would shutter indoor operations for restaurants, movie theaters, houses of worship and gyms, limit retail businesses to just 25% capacity and have major impacts on indoor business for most other industries until the county can improve its numbers.

The county Board of Supervisors met multiple times in the last few days to discuss taking potential action should that happen, including legal action. Gov. Gavin Newsom rejected a county effort Wednesday to discount the more than 800 positive tests recorded by San Diego State University since the semester began.

The data released Tuesday did factor in SDSU cases. The push to exclude them was an unlikely gambit in the first place, as SDSU is located in a highly residential neighborhood in the heart of the city.

"We included the San Diego State University numbers we received in all of our calculations," state Health Secretary Dr. Mark Ghaly said. "We've worked closely with San Diego County over the past, not just last week, but really intensely over the last week to make sure we all understood the data and that we understood where the county landed in the framework. There were no concessions made based on their data. And we looked closely at San Diego State, the same way we do all of the other counties across the state."

Despite the good news about remaining in the red tier, Ghaly noted that the county is hovering on the brink of being downgraded. The state rules currently state that a county has to be above one of the two metrics -- daily case rate by population and positive test rate -- for two consecutive weeks before it can be moved. To move down to less restrictive tiers, both of those metrics must be below state guidelines for two consecutive weeks. Should the county be placed in the purple tier, it would have to wait a minimum of three weeks before moving back to less restrictive tiers.

Ghaly said San Diego County would stay in red for this week, but he could not make any promises for the week after if case numbers rise again.

"We certainly see a county that is hovering around that threshold between red and purple, but we continue to have conversations about how we at the state can support San Diego, as well as understanding more and more what San Diego is doing around places like San Diego State University to curtail or limit transmission," he said.

To facilitate expanded COVID-19 testing at San Diego State University, the county testing site at Mar Vista High School in Imperial Beach will be temporarily closed through Friday. Testing there will resume Sept. 28.

Testing capacity at the SDSU Alumni Center at 5250 55th St. is being expanded from 500 to 1,000 tests a day and will be open to the public, students and university staff. The no-appointment site will offer testing from 8:30 a.m. to 4 p.m. through Friday.

As of Monday night, SDSU had reported 880 confirmed or probable cases, including two reports of faculty or staff who have tested positive.

The San Diego County Board of Supervisors passed a motion Tuesday to show their support for County Public Health Officer Dr. Wilma Wooten in her efforts to work with the state.

The board voted to support Dr. Wooten's effort for "the adjudication and revised reopening criteria to accurately reflect the dynamics of the pandemic in San Diego County."

Many of the supervisors felt aside from daily cases of COVID-19, other factors like hospitalization rates, the case rate adjustment factor and special circumstances should be considered before rolling back any progress in reopening.

It began with Board Vice Chair Jim Desmond making a motion to write another letter to the governor asking for local control in reopening. After discussion, he changed his motion for the board to back Dr. Wooten to work with the state in revising the criteria.

The vote passed 4 to 1 with Supervisor Nathan Fletcher dissenting.

Though the vote board showed their support for Wooten and her efforts in working with the state, it's unclear if it will lead to any change.

Of the 6,374 tests reported Monday, 5% returned positive, bringing the 14-day rolling average of positive tests to 3.7%.

The number of community outbreaks remains above the trigger of seven or more in seven days. A community setting outbreak is defined as three or more COVID-19 cases in a setting and in people of different households over the past 14 days.