SAN DIEGO (CNS) - Despite an adjusted daily COVID-19 case rate of 7 per 100,000 population, San Diego County was again able to avoid being pushed into the most restrictive purple tier of California's four-tier reopening system.

High rates of testing helped the county stay in the red tier, county officials said. The positive adjustment is given by the state to counties that are testing at higher levels than the state's median. That adjustment prevented the county from landing in the purple tier, which would have placed indoor activities at restaurants, movie theaters, gyms and a number of other locations in jeopardy.

"Remaining in the red tier is good news, but the new adjusted rate is not. The new figure clearly shows the region is not moving in the right direction," said Dr. Wilma Wooten, San Diego County public health officer. "It is extremely important San Diegans follow the local health guidance to slow the spread of COVID-19 and keep the region from falling into the purple tier."

While the testing positivity percentage for the region also increased from 3% to 3.3%, it still remains low enough for this metric to remain in the orange tier. If a county reports statistics meeting metrics in a higher tier for two consecutive weeks, it will move into that more restrictive tier for a minimum of three weeks. 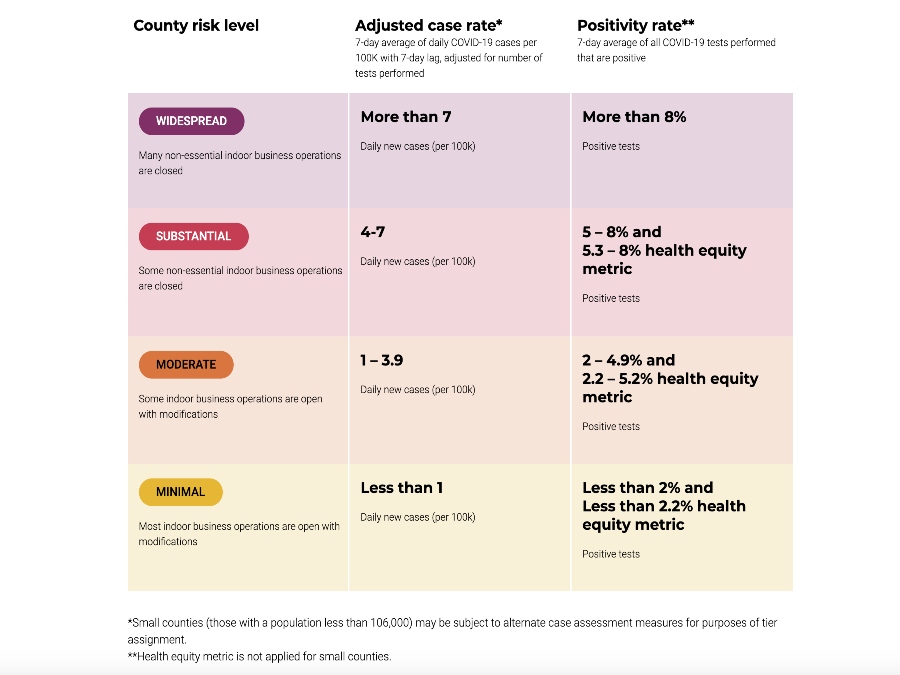 The state's health equity metric, which looks at the testing positivity for areas with the lowest healthy conditions, dropped from 5.7 to 5.5% and remained in the red tier. This metric does not move counties backward to more restrictive tiers, but is required to advance.

Four men died between Oct. 11 and Oct. 18, and their ages ranged from mid-50s to early 80s. All had underlying medical conditions.

Of the 9,110 tests reported Tuesday, 3% returned positive, bringing the 14-day rolling average percentage of positive cases to 2.8%, far below the state-set target of less than 8%.

A community outbreak is defined as three or more COVID-19 cases in a setting and in people of different households over the past 14 days.

The county uses community outbreaks to get a larger sense of the pandemic locally, but the state does not include the statistic in its weekly report.

Wooten said 95% of the county's cases were not related to a marked community outbreak, a clear indicator the illness has spread throughout the county.

The Vista Unified School District, meanwhile, fully reopened its schools Tuesday morning, becoming one of the first in the region to do so.

The district invited students back to 28 schools, eschewing some of the more cautious measures some other school districts are taking, moving into its Phase 3 reopening plan. The plan, "Vista Classic," allows every school in the district to reopen at full capacity. Parents and guardians will still be able to keep students in "Vista Virtual," the district's distance-learning program, if they so choose.

"Our health and safety measures were working well, with mask wearing and handwashing particularly strong on all campuses," Vista Superintendent Matt Doyle said after visiting campuses. "We will continue to refine arrival, dismissal, and lunchtime routines for students as they relearn how to interact with their friends in this new social distancing environment."

The district said it will attempt to have social distancing as much as possible, but will allow as many as 38 students in a single classroom, so desks will not be spaced six feet apart.

A rally Thursday by teachers and parents at Foothill Oaks Elementary School attempted to dissuade the Vista Unified School Board from reopening, with many educators believing the safety measures inadequate.

According to KPBS, plexiglass barriers were not provided to teachers. Instead, they were given PVC pipes and plastic liner to create makeshift protection from students returning to in-person learning.