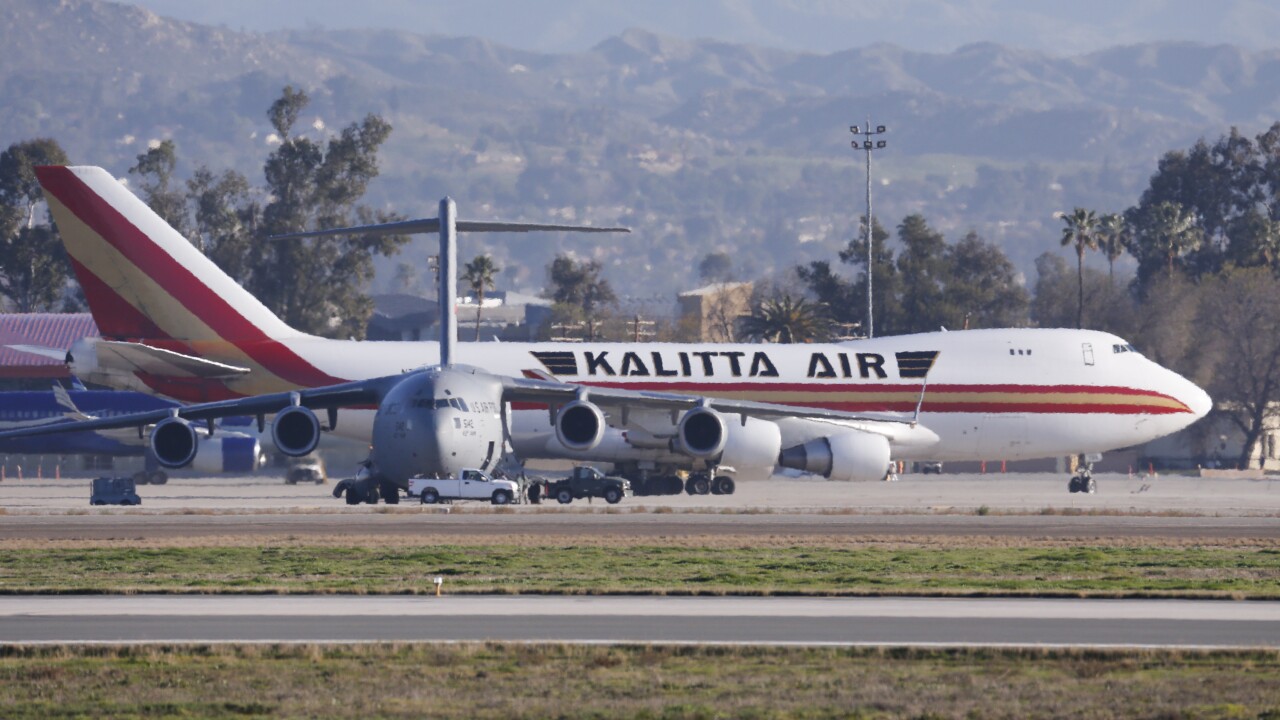 POMONA (CNS) - Two Congress members from Southern California Saturday formally asked the U.S. Air Force secretary for more information about the decision to reroute a plane carrying 195 passengers from Wuhan, China, where the deadly coronavirus was first detected, to March Air Reserve Base in Riverside, where the evacuees remained under federal quarantine orders.

The plane, originally set to arrive at Ontario International Airport, was rerouted to March AFB and landed at 8:11 a.m. Wednesday.

The letter from Rep. Mark Takano, D-Riverside, and Rep. Norma Torres, D-Pomona, said Congress was kept in the dark about the last-minute decision to redirect the plane and has yet to receive any contact or update from the U.S. Department of Defense on the flight or any future plans to repatriate additional individuals at March ARB.

"We are deeply troubled by this lack of transparency. Any unilateral decisions in this regard has had and will continue to have lasting impacts on the employees and citizens at March as well as members of the surrounding community," they said.

On Friday, Takano, said in a statement that his "office was not consulted on the decision to utilize March Air Reserve Base as a repatriation center for this flight."

Torres previously called the decision "ill-conceived" and called for an investigation by the inspector generals for the U.S. Health and Human Services and the State departments. Ken Calvert, R-Corona, and Takano echoed the call for an investigation.

Some local officials also said they were not kept in the loop about the decision.

The passengers arrived on a U.S. State Department-chartered airplane and were initially said to be staying at March AFB under a three-day voluntary isolation while they were evaluated to ensure none developed any symptoms. Public health officials said the passengers would be able to return home following the 72 hours.

But on Thursday, Riverside County's public health officer ordered one of the passengers to be quarantined for the virus' two-week incubation period "or until otherwise cleared" after that person tried to leave the base.

Then on Friday, CDC officials issued a mandatory quarantine order as a precaution for the entire group, which is mostly made up of diplomats and their families. In issuing the order, federal health officials pointed to a case reported in Germany in which a person might have spread the virus to another person before developing symptoms.

They also mentioned a report published Thursday night in the New England Journal of Medicine showing that infected people can transmit the virus before they develop symptoms.

"While we recognize this is an unprecedented action, we are facing an unprecedented public health threat and this is one of the tools in our toolbox to mitigate the potential impact of this novel virus on the United States," Dr. Nancy Messonnier, director of the CDC's National Center for Immunization and Respiratory Diseases, said during a media briefing.

County health officials issued a statement saying they "fully support the quarantine order implemented today by the Centers for Disease Control and Prevention."

The plane from China first landed in Anchorage, Alaska, for a refueling stop and preliminary screening of passengers was conducted by CDC personnel about 10:30 p.m. Tuesday before heading to Southern California. Passengers were also monitored throughout the flight and none of them were deemed high risk, Rear Admiral Dr. Nancy Knight, director of the Division of Global Health Protection at the CDC, said.

The original flight manifest stated that there were 240 passengers aboard the flight, but officials said some people did not show up or did not have the proper documentation to board. One person had a fever and had to stay behind in China.

Among the passengers were nine children, the youngest of which is 1 month old.

CDC said that although little is known about the coronavirus, the risk of infection for people in the United States is low. No cases of coronavirus have been reported in Riverside County.

"While we realize that many people are nervous right now, understand that we are committed to your safety and are taking all precautions to ensure both the passengers and our residents are safe," County Supervisor Jeff Hewitt said.

The federal quarantine order -- the first in 50 years -- comes amid the federal government declaring a public health emergency and the Trump administration temporarily barring foreign nationals believed to be at risk of transmitting the virus from entering the United States.

Meanwhile, the U.S. State Department issued its most serious travel advisory, warning Americans not to travel to China.

Delta, American and United airlines also announced they will temporarily halt all of their flights to mainland China due to the coronavirus outbreak.

The outbreak was first detected in December in the industrial city of Wuhan in the Hubei province of central China. Since then, more than 11,790 cases have been reported in China, with at least 259 deaths, and the virus has been confirmed in patients in a handful of other nations, including the United States. Eight cases have been confirmed in the United States -- including one in Los Angeles County and one in Orange County. The CDC on Thursday morning confirmed the first person-to-person infection in the United States, involving a husband and wife in Chicago.

The Riverside County Emergency Management Department set up a dedicated phone line to answer residents' questions about coronavirus at 951- 358-5134.