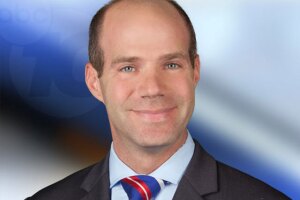 Prior to joining 10News, Jared spent 10 years at KGAN/KFXA in Cedar Rapids, Iowa. During his time as sports director at the station, he won a pair of Emmys as the top sports anchor in the Upper Midwest region. He also received several awards from the Iowa Broadcast News Association and the Iowa Associated Press. He covered a Masters, the Super Bowl, a handful of college bowl games and several NCAA tournaments, as well as countless high school sports events ranging from football to girls' volleyball.

Jared started his broadcasting career at KXLF in Butte, Montana, where he worked as a news and sports reporter, and anchor. While there, Jared focused on city government and economic development as the city tried to find its way through an economic downturn.

Jared grew up in Phoenix and graduated from Arizona State University. He's a passionate Sun Devil, Diamondbacks and Suns fan, with some Arizona Cardinals and New York Yankees thrown in for good measure.

He still has a lot of family all over the Southwest, so coming to San Diego was a great way for him to get closer to home and back to his roots.

In his free time, you can find Jared running at the beach, going to movies, collecting bobble-heads or trying his best to never eat at the same restaurant twice (there are just too many to try).