And that's a wrap! Check the blog below to see what made headlines on the red carpet and during the show at this year's Oscars!

After a successful awards show with no best picture flub - Kimmel thank viewers, wished his wife a happy birthday and apologized to Matt Damon for "running out of time."

Remember the jet ski? Short speeches were encouraged - with a jet ski prize. Mark Bridges, the winner of the costume design Oscar for "Phantom Thread" rode out with his prize and a life jacket.

Beatty and Dunaway announce "Shape of Water" as the Oscar-Winner for best picture. The film received 13 Oscar nominations and won four on Sunday night.

Warren Beatty and Faye Dunaway smile as they walk to the mic - a scene remniscient of the 2017 Oscars.

ACTRESS IN A LEADING ROLE: Frances McDormand for "Three Billboards Outside Ebbing, Missouri."

Frances McDormand took a moment to appreciate women, asking all who women who were nominated to stand with her.

"Meryl, if you do it everyone will!" she said, urging the nominees to stand.

ACTOR IN A LEADING ROLE: Gary Oldman for "Darkest Hour"

"I would just like to thank Sir Winston Churchill," Oldman said. "For being wonderful company on this remarkable journey!"

This is Oldman's second nomination and first Oscar win.

Academy Award winnter Emma Stone announces Guillermo Del Toro as the winner of the Oscar for directing for his work on "Shape of Water."

"I am an immigrant...like many of you," Del Toro said. "The greatest thing in our industry is to ignore the lines in the sand."

Actress and music artist Zendaya introduces Keala Settle and a performance of Oscar-nominated song "This Is Me" from "The Greatest Showman.

"It was a team effort," - Roger A. Deakins on his Oscar win for "Blade Runner: 2049" Cinematography.

Sandra Bullock draws some laughs from the audience as she comes on stage to present the Oscar for Cinematography...and asks if someone can turn the lights down so she can "go back to her 40's."

Matt Damon is in one of those scenes...so Kimmel takes the opportunity to call him out of course!

The Oscars thank men and women in the armed forces for their service with an tribute including scenes from powerful films that have shined a light on the men and women who fight for our Country.

Nicole Kidman presents the Oscar for original screenplay to Jordan Peele for "Get Out." 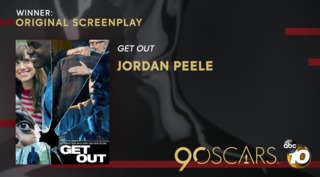 The Oscars make a statement, bringing Annabella Sciorra, Salma Hayek and Ashley Judd onstage to present a video on diversity.

Gerwig is the first woman Oscar-nominated for her directorial debut with "Lady Bird."

Dave Chappelle walks onto the stage to what he calls "a smattering of applause" and introduces Common and Andra Day for their performance of Oscar-nominated "Stand Up For Something."

The pair recorded the song for the soundtrack of "Marshall," a film about Thurgood Marshall, the first African-American U.S. Supreme Court Justice.

Maya and Tiffany present the Oscar for Documentary Short Subject to "Heaven is a Traffic Jam on The 405."

A man named Mike, pulled from the audience, was asked to introduce the next presenters - Tiffany Haddish and Maya Rudolph.

"I don't know if you know who we are," Gal Gadot said as the audience began to clap and scream. "But we brought you some goodies!"

Kimmel went on to say this was a thank you to movie-goers. The audience stood up to clap as Kimmel and crew passed out sub sandwiches and hot dogs. What a surprise!

What's happening? Jimmy Kimmel just announced that a group of people are across the street from the Dolby Theatre where they think they are only in for a screening of "A Wrinkle In Time."

"I thought we'd give them a surprise visit," Kimmel told the audience. "Who's going with me?"

We'll see what happens after the break!

Academy Award winner Matthew McConaughey presents the award for achievement in film editing to Lee Smith for "Dunkirk." Smith begins his speech with, "This is, the best thing that could happen...to a guy like me."

"Viva Mexico!" announcer exclaims as "Coco" is named the winner of the Animated Feature film.

The Oscar for best animated short went to “Dear Basketball" by Glen Keane and Kobe Bryant.

Allison Janney won the Academy Award for actress in a supporting role for her part in I, Tonya.

A Fantastic Woman won the Academy Award for foreign language film. Presenter Rita Moreno was all smiles as she presented the award.

(AP) -- Working in a comedy bit from one of the signature moments of the Oscar-nominated film "Get Out," Jimmy Kimmel has told this year's winners that if they rambled in their acceptance speeches they wouldn't be played offstage by music.

Instead, Kimmel had actor Lakeith Stanfield race on stage and scream, "Get out," just as he did in the movie.

The Shape of Water won an Academy Award for production design.

“Icarus” won the best documentary academy award. The film tell the story of a doping program used by athletes in Russia. I a speech, Director Bryan Fogel said he hopes the film is a wake-up call.

Actor Sam Rockwell won the Oscar for best actor in a supporting role for his part in "Three Billboards outside Ebbing, Missouri."

During Jimmy Kimmel's opening monologue to celebrate the 90th year of the Oscars he spoke about sexual harassment saying "we can't let bad behavior slide anymore." Kimmel also spoke about equal pay for all women.

Two actresses who have accused Harvey Weinstein of sexual harassment, Ashley Judd and Mira Sorvino, both spoke out at the 2018 Oscars. "The world is ready to heal" Judd said when asked about the Me Too ad Time's Up movements. 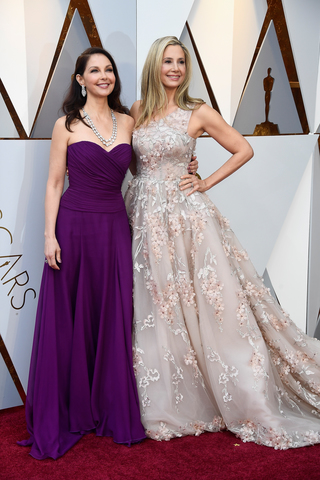 Rita Moreno re-wears to the Oscars

As the glitz and glam of the 2018 Oscars got underway, Rita Moreno stole the show. Moreno re-wore the dress she originally wore to the 1962 Oscars to accept the award for West Side Story. 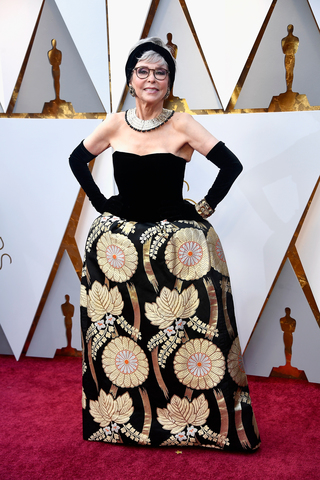 Celebrities have started to arrive on the red carpet for the 2018 Oscars.