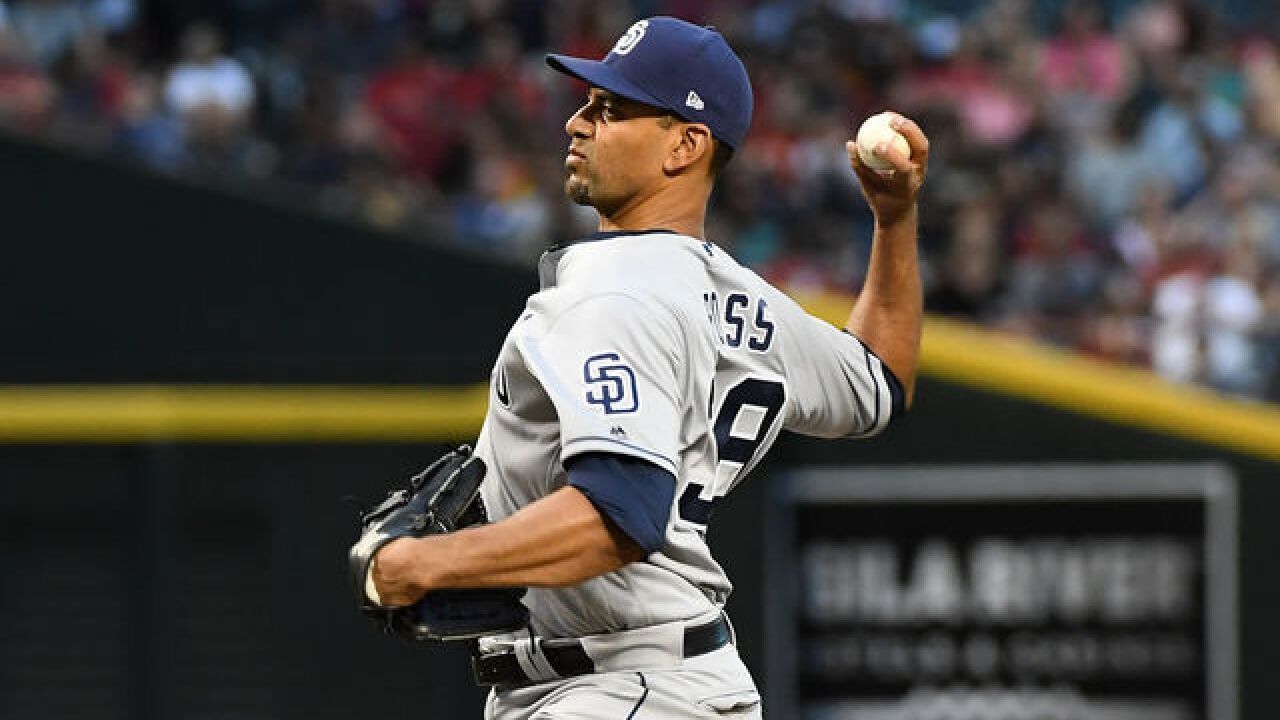 That's the way it's always been over the last half-century when the San Diego Padres flirt with a no-hitter.

Ross lost his bid to pitch the first one in the history of the Padres when rookie center fielder Franchy Cordero appeared to misjudge a ball with two outs in the eighth inning Friday night of a 4-1 win over the Arizona Diamondbacks.

Playing their 7,835th game since joining the majors in 1969, the Padres again came agonizingly close to their first no-no. They remain the only team in the big leagues that has never thrown a no-hitter.

COLUMN: Padres walk a fine line in what they're willing to tell fans

As he mowed down the Diamondbacks with a dominant slider and effective fastball, Ross tried not to think about what he might do.

"Anytime those thoughts popped in my head, I had to try and shut them out and think about something else," he said. "But I was having fun. Being up 1-0 going that deep into the game, a good time."

But it could have been a whole lot better.

Ross had a 1-0 lead with two outs in the eighth when Christian Walker lined a drive to deep center. Cordero seemed to get a late jump on the ball, then had it sail just over his outstretched glove. Walker, called up from Triple-A last week, wound up with an RBI double that made it 1-all.

RELATED:  Rooftop bars in San Diego to watch the Padres

"It wasn't the cleanest break," Padres manager Andy Green said. "I know he's the type of kid that's going to go home thinking about that, how bad he wanted to make that catch. Frenchy gives everything he has out there. It would have been nice. He's plenty fast enough to make some amazing plays. That was just a tough read off the bat."

Cordero, speaking through a translator, said it was a tough ball to gauge.

"It was a ball that was hit hard and it was going right over my head," he said. "It was a tougher read, so I'm just going to work hard so that we're good at that in the future. I would have liked to make that play, just so Tyson could have gone out there and kept throwing his game and could have had his no-hitter."

Ross briefly grimaced when the ball fell, and was pulled after throwing a career-high 127 pitches.

He looked as if he was running out of gas in the last inning and Green went to the mound with one out, but Ross stayed in.

"I probably could have been lobbied (to let Ross stay in for the ninth)," Green said. "It's a special thing, and you want guys to have a chance to achieve special things."

The right-hander, who turns 31 on Sunday, struck out 10 and walked three. He retired 18 straight batters after walking Jarrod Dyson in the first inning.

This was the second no-hit bid to end with two outs in the eighth in the same ballpark in four nights. Arizona's Patrick Corbin came close in a one-hit, 1-0 win over San Francisco on Tuesday.

Ross was an All-Star with the Padres in 2014. He was their opening day starter in 2016, but didn't pitch the rest of the season because of a shoulder ailment.

Ross pitched 12 games for Texas last year, and rejoined the Padres this season on a minor league contract.

Hand (1-2) relieved Ross and got the last four outs — they combined on the 29th one-hitter in Padres' history.

Christian Villaneuva hit an RBI single off Brad Boxberger (0-2) in a three-run ninth.

Cordero hit a homer estimated at 489 feet by Statcast for the Padres' first run.

Matt Koch, brought up from Triple-A Reno to take the start of Taiujan Walker — who undergoes Tommy John surgery next week — allowed one run on two hits in six innings.

"Offensively, we really couldn't get anything going and Ross deserves a little bit of credit for that," Diamondbacks manager Torey Lovullo said. "The fastball-slider combination and the fastball in swing counts kept us off-balance all night."

Padres: Wil Myers was activated from the 10-game DL (right arm inflammation). He was in the lineup after missing 15 games.

Diamondbacks: Chris Owings and A.J. Pollock were out of the starting lineup after their outfield collision the previous night. Owings took a knee to the jaw and his head slammed to the warning track and had a bruised side of his head. He said he passed concussion tests Thursday night and Friday. Pollock jammed his right hand but stayed in the game. ... 3B Jake Lamb (sprained left shoulder) played in an extended spring training game.

Arizona sends RH Zack Godley to the mound and the Padres go with LH Clayton Richard in the second game of the series Saturday night. A loss would end the Diamondbacks' franchise-record string of six straight series victories to start the season.