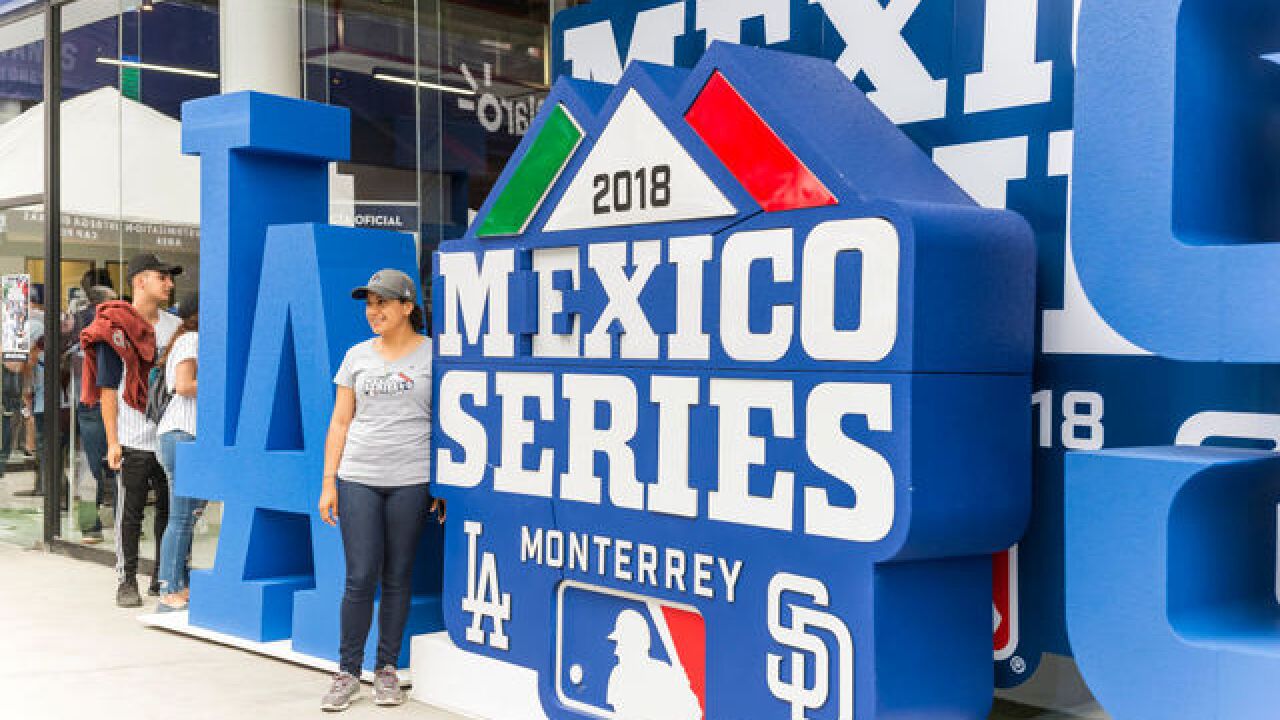 Copyright Getty Images
Azael Rodriguez
<p>MONTERREY, MEXICO - MAY 04: A fan poses for a photo with the Mexico Series Logo prior the MLB game between the San Diego Padres and the Los Angeles Dodgers at Estadio de Beisbol Monterrey on May 4, 2018 in Monterrey, Mexico. (Photo by Azael Rodriguez/Getty Images)</p>

MONTERREY, Mexico (AP) — The Dodgers have the most no-hitters in the majors — and now the most in Mexico, too.

Rookie Walker Buehler  and a trio of Los Angeles relievers combined for the franchise's 23rd no-hitter in a 4-0 victory over the San Diego Padres in the opener of a neutral-site series Friday night.

Mexico had waited since 1999 to host a regular-season big league game, and it got a historic one: the first no-hitter ever outside the U.S. or Canada and the 12th combined no-hitter in major league history.

INJURY TALK: Padres walk a fine line in what they're willing to tell fans

A crowd of 21,536 at Estadio de Beisbol Monterrey saw Buehler stay steady despite early rain. In just his third start in the majors, he went six innings before  Tony Cingrani  ,  Yimi Garcia  and  Adam Liberatore  closed it out.

Buehler, a 23-year-old taken in the first round of the 2015 amateur draft, struck out eight and walked three. After 93 pitches, the highly touted right-hander was pulled. Cingrani walked two in the seventh, but the lefty kept the bid intact.

"It*s probably one of the toughest conversations I ever had, I wanted to keep going," Buehler said. "But they made the choice and the guys finished out and it was cool."

"I threw one in high school, but I gave up two runs in the first inning, so that one doesn't really count," Buehler said.

Garcia struck out two in a perfect eighth and Liberatore threw a 1-2-3 ninth,  striking out Franchy Cordero  to end it with the Dodgers' 146th pitch.

That ended a festive night that began with  a ceremonial first pitch thrown by Dodgers great Fernando Valenzuela  , who became a star in the U.S. and Mexico and set off "Fernandomania" when he became a fan favorite in the 1980s.

The Dodgers threw this no-hitter on the same night Albert Pujols of the Los Angeles Angels got his 3,000th hit in a game at Seattle. When Pujols hit his 600th home run at home against Minnesota last June 3, Miami's Edinson Volquez pitched a no-hitter at home against Arizona.

These dual accomplishments evoked memories of the day in 1985, too, when Rod Carew got his 3,000th hit and Tom Seaver won his 300th game.

And the team with the most no-hitters in major league history — Boston is second with 18 — accomplished the feat against the only franchise that hasn't pitched any.

This series was part of Major League Baseball's push to internationalize the sport. No doubt, souvenirs from this game will wind up in the Hall of Fame

Buehler's highest pitch count in the majors is 94 pitches, reached in his previous outing against San Francisco.

"It's one of those where you're pretty angry to come out, but the bullpen, the guys that we have, I trust it in their hands, too," he said. "And it worked out."

Dodgers manager Dave Roberts isn't afraid to pull a young pitcher during a no-hitter. He removed then-rookie Ross Stripling from a bid against San Francisco with one out in the eighth inning in 2016. Reliever Chris Hatcher allowed a home run to the next batter.

This one worked out better for Roberts, giving baseball its second no-hitter of the season. Oakland left-hander Sean Manaea threw the first against Boston on April 21.

Matt Kemp had an RBI single  on a popup that fell between shortstop Freddy Galvis and right fielder Matt Szczur in short right field in the first inning,  and Chris Taylor  and  Enrique Hernandez  hit consecutive homers in the second.  Alex Verdugo singled in a run in the sixth against Adam Cimber.

"This is the fourth time that I get to see a no-hitter, but the first one that I'm on the good end of it," Hernandez said. "Walker was electric and the relievers did a great job. It*s not an easy feat. It*s a night that no one is going to forget."

Dodgers: RHP Julio Urias made the trip to his native Mexico. The 21-year-old had surgery last June to repair the left anterior capsule in his pitching shoulder, and his return was projected at 12-to-14 months. Roberts said Urias' return will not be until the second half of the season.