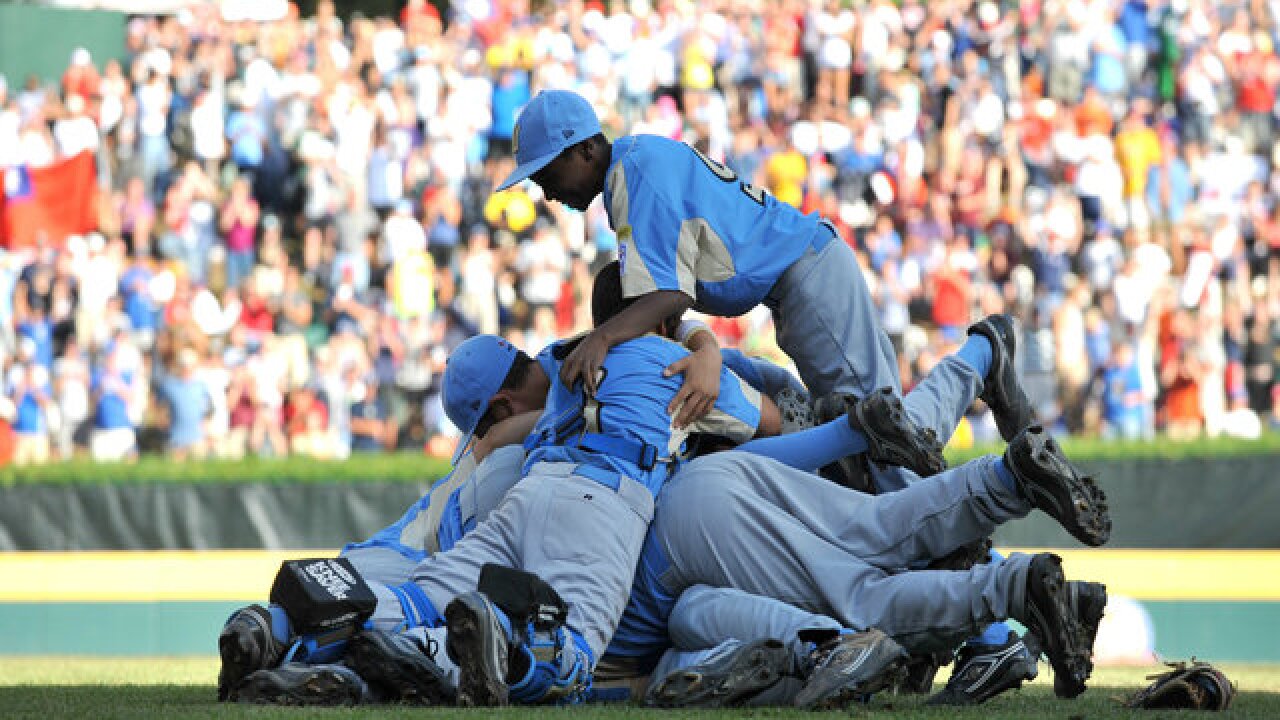 ESPN The Magazine is celebrating its 20th anniversary by releasing lists of the best teams and athletes of the last 20 years. Needless to say, there isn't a lot of San Diego on the list -- with the exception of a No. 4 ranking for NASCAR driver Jimmie Johnson on the "Most Dominant Athletes" list.

As it happens, my career in San Diego sports media began in 1998, so I thought I'd take it upon myself to come up with a list of the best San Diego teams of the past 20 years.

Unlike ESPN, which came up with complicated metrics to determine their lists, mine is completely subjective. Feel free to tweet me your complaints at @BenHigginsSD.

The Aztecs went 40-21 to receive an at-large berth into the NCAA Tournament, but ended up in a brutal region featuring top-ranked UC Irvine, Fresno St, and 7th ranked Virginia, which knocked off Strasburg and the Aztecs 5-1 in the postseason opener.

Four years after another Little League team from the South Bay made its memorable run, the kids from Eastlake went to Williamsport and captured San Diego's attention again.

Led by a no-hitter from pitcher Grant Holman (now a high school senior bound for a scholarship at Cal), Eastlake went on to the win the U.S. Championship before falling to Chinese Taipei in the world championship game.

This team looked like it might be able to make some noise in the postseason -- until “Rocktober” happened.

The Padres’ 89 wins are tied for the 5th most in franchise history, but the Friars missed the playoffs after a dramatic Game 163 extra-inning loss at Coors Field.

The Colorado Rockies won an incredible 21 of 22 games to pass the Padres in the standings and eventually reach their first World Series.

This season came right in the middle of the Sockers’ pro sports record-setting 48-game winning streak.

The Sockers went on to win the third of four straight PASL titles, going 16-0 in the process.

They wouldn’t lose again until January 2013.

No one was expecting much from the 2004 Chargers. It was supposed to be a transition year to hand the reigns over to recently drafted quarterback Philip Rivers.

Instead, a breakout season by Drew Brees led to an 8-game winning streak and a 12-4 record.

Unfortunately, Marty Schottenheimer's penchant for playoff puking prevailed, and the Chargers lost at home to the Jets in the Wild Card round when Nate Kaeding couldn't connect on a 47-yard field goal for the win.

Bill Grier's first season as head coach of the Toreros turned out to be far and away his best. USD went 11-3 in WCC play to finish in 3rd place. But the Toreros took advantage of hosting the conference tournament at the Jenny Craig Pavilion to win three games in three days, topping Gonzaga to reach the NCAA Tournament.

It's been a busy 20 years for Luke Walton.

Before he became head coach of the Lakers or helped coach the Golden State Warriors to an NBA title; before he won two championship rings in a decade-long NBA career; before a standout career at the University of Arizona, Luke led the 1998 University of San Diego High School Dons to a Division III CIF state championship to cap his senior year.

His driving basket with less than 10 seconds left in regulation forced overtime. USDHS went on to a 58-54 win over Fresno Washington Union to complete a 24-5 season and the school's first state title.

How often do you have a future Heisman Trophy winner and No. 1 overall NFL draft pick on the same high school football team?

Reggie Bush and Alex Smith were a formidable duo for the Highlanders, leading Helix to back-to-back section titles, including a 12-1 record in 2001. Bush ran wild over the competition, with 2,200 yards and 34 touchdowns.

Only a surprise loss to Monte Vista keeps them from being higher on the list.

This turned out to be the final playoff team in San Diego for general manager Kevin Towers and manager Bruce Bochy.

They cruised to an NL West title with 88 wins but were upended in the divisional round of the playoffs for the second straight year by the St. Louis Cardinals, who went on to win the title.

For two weeks, the city of San Diego jumped on the women's basketball bandwagon.

Led by Jene Morris and coach Beth Burns, the 11th seeded Aztecs made a stunning run to the Sweet 16, knocking off Texas and West Virginia to make it out of the Austin regional.

The team returned home to headlines and pep rallies before traveling to Memphis for a meeting with 7th ranked Duke. The Aztecs were down by only one point at the half, but eventually fell to the Blue Devils 66-58.

Perhaps the best of San Diego's five WCHL Taylor Cup champions, the Gulls won the South division with a franchise-best 53-10 record, and then topped Idaho in 5 games in the final for the team's third straight cup title.

It's hard to separate the back-to-back champs that brought UCSD its first Division II national titles. Both teams went 21-2 under coach Brian McManus and won the CCAA with 12-2 records.

Could very easily have been the top team on this list if not for the home playoff collapse against the New England Patriots.

Led by a record-setting season from LaDainian Tomlinson, the Bolts started 2-2 before reeling off 12 straight victories to post a 14-2 record.

It didn't help Marty Schottenheimer, who was fired as head coach after the season and replaced by Norv Turner.

A road win over Kansas helped propel the Aztecs to as high as No. 5 in the national rankings.

Led by Xavier Thames, J.J. O'Brien, and Winston Shepard, SDSU captured the Mountain West regular season title with a 16-2 record before losing to New Mexico in the conference tournament finals.

The Aztecs still earned a No. 4 seed in the NCAA tournament and survived an overtime scare against 13th seed New Mexico State in the first round before dispatching 12th seed North Dakota State to reach the Sweet 16.

That earned the Aztecs a matchup against No. 4 Arizona in Anaheim, but SDSU couldn't avenge an early season loss to the Wildcats at Viejas Arena, falling 70-64 to finish with a 31-5 record.

Perhaps the best high school football team in San Diego section history, the Dons took on all comers, going 15-0 with a 38-35 win over Stockton St. Mary's in the state championship game.

MaxPreps ranked Cathedral Catholic 15th in the nation at the end of the season.

After a 1-3 start, Chargers fans were already calling for new coach Norv Turner's head, but the Bolts rallied to finish 11-5 and win the AFC West by a comfortable four games.

This team hit its stride in the playoffs, beating the Tennessee Titans and then going on the road to take down Peyton Manning and the Colts in an epic struggle at the RCA Dome.

Despite injuries to LaDainian Tomlinson and Philip Rivers, the Chargers even gave the undefeated New England Patriots a run for their money in the AFC Championship game before falling 21-12.

The team that launched San Diego's love affair with the Little League World Series, Park View made it to Williamsport, but lost to Texas in a pool play game. That just made the road a little harder in the elimination round, where the West champs in baby blue jerseys rallied from behind to beat Georgia 11-10, before avenging their loss to Texas with a 12-2 rout to win the U.S. championship.

They returned home to a hero's welcome, complete with that rarest of celebrations, a San Diego victory parade.

The best college basketball team in San Diego history, the Aztecs won their first 20 games to rise to a program-best No. 4 national ranking before tripping up at home in a nationally-televised game against BYU and star Jimmer Fredette.

Another loss to the Cougars preceded a third meeting in the Mountain West Conference tournament championship game, where the Aztecs got their revenge with a 72-54 rout.

San Diego State was rewarded with a No. 2 seed in the NCAA Tournament, earning the first-ever March Madness win in program history by beating Northern Colorado in the first round. The Aztecs were then tested by Temple, but emerged in double overtime to reach the Sweet 16.

A back-and-forth game against UConn followed, with the Aztecs bowing out 74-67 against the eventual national champions.

The Padres dispatched Randy Johnson and the Astros in the divisional round, before taking out the Braves in six games to win the National League pennant. Waiting in the World Series, of course, was one of the greatest teams in MLB history.

Despite Tony Gwynn's dramatic Game 1 home run, the Padres couldn't hold onto an early lead, and were eventually swept in four games by the New York Yankees.