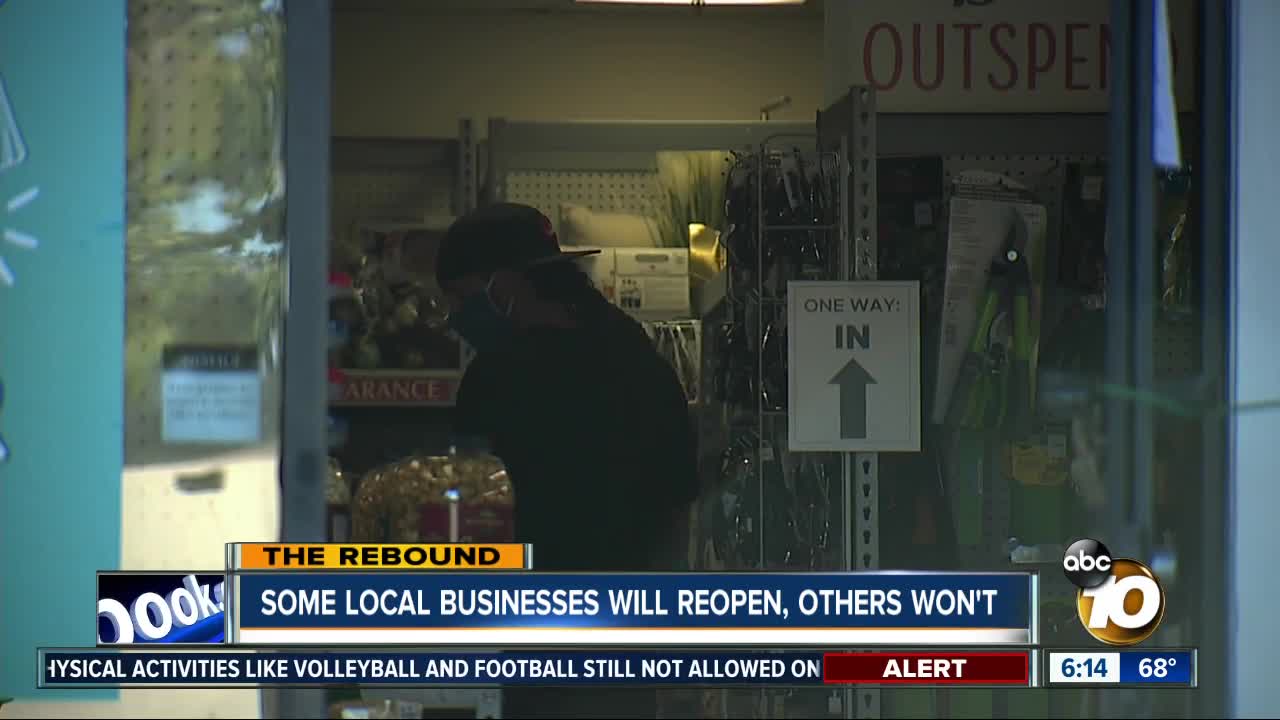 Businesses across California are slowly starting to open. As they begin to rebound, there are questions about the strength of the retail industry and what the impact of the pandemic will be moving forward. As they begin to rebound, there are questions about the strength of the retail industry and what the impact of the pandemic will be moving forward.

"People do want to say yes to the dress because they want to look beautiful on their big day," said Caitlin Todd with Prevue Formal and Bridal.

Inside the Todd family's La Mesa store, the rack is stocked and once again waiting for brides to find their perfect dress.

"It's been great," Todd said about the store reopening. "Our brides are so happy. People have been coming in."

While businesses may finally be open, things are a little different.
Face masks, social distancing guidelines, and strict sanitation policies are in place.

"It is more quiet in there," Todd said. "It's not the busy hustle and bustle, but people have loved it because it's a more intimate setting. The brides can say yes with their family and friends close by and there isn't as many distractions in the store."

Prevue is one of the lucky ones.

A loyal customer base, smart marketing strategy, and outside-the-box thinking kept them afloat and brought them back.

As malls and stores across the state start to reopen, not everyone will see the lights turn back on.

Last week Victoria's Secret announced it's closing some stores, and Pier 1 said it would permanently close all of its stores.

"Some of these jobs will be lost forever; some of them will come back," said Lynn Reaser, chief economist and adjunct professor of economics at Point Loma Nazarene University. "We know there's going to be a lot of problems for retailers getting back on their feet."

Reaser said many large retailers were struggling before the pandemic. The closures were just the final blow. She believes when jobs do come back, they'll look a bit different.

"In many cases, we'll see more people needed to do the sanitizing and to make sure that people are obeying the rules in retailing," Reaser said. "So the jobs are going to change character."

"This is a real stress test for a lot of small businesses," said Dr. George Belch, a professor of marketing and chair of the Marketing Department at San Diego State University.

Belch said the state is seeing economic activity because there's a lot of pent-up demand. People like to shop.

The question now is: how safe will people feel in stores?

"Once you've seen the way other stores, our store as well, have taken the steps to make sure we're sanitized, you feel comfortable. You get used to it and it's great just to be out in public again," Todd said.

According to the National Retail Federation, a quarter of California's jobs are supported by the retail industry.

The National Retail Federation projects 7 million retail workers nationwide could be displaced over the year due to the pandemic.