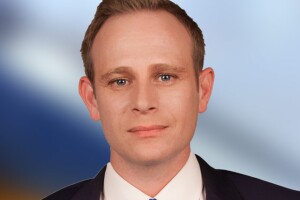 Adam Racusin is an investigative reporter at ABC 10News in San Diego.

The son of two bankers, Adam’s parents are still baffled how he ended up as a journalist.

After spreading his wings and spending more than half a decade bouncing around the Midwest, the Los Angeles native is happy to be back in Southern California.

Adam came to San Diego from KEYE TV in Austin, Texas, where he was an investigative and political reporter.

In Texas, Adam was awarded the 2015 regional Edward R. Murrow Award for hard-news reporting for a story on veterans' health benefits. He also won an Emmy award for best general assignment/spot-news reporting.

While in Texas, Adam traveled the state reporting on Texas' death row, the indictments of former Governor Rick Perry and Attorney General Ken Paxton, the filibuster showdown over access to women’s health, and the deadly crash at the South by Southwest festival.

In San Diego, Adam set his sights on helping consumers. His reports have led to getting people their money back, sending bad actors behind bars, and encouraging lawmakers to promise new legislation. Since joining 10News, Adam’s work has been honored by the by San Diego Chapter of the Society of Professional Journalists, the San Diego Press Club, and the National Academy of Television Arts and Sciences Pacific Southwest Chapter.

Adam began his career at KULR 8 in Billings, Mont., and made stops in Santa Maria, Calif. and Omaha, Neb.

Adam graduated with a Bachelor of Arts in journalism from Cal State University, Northridge, where he met his wife.

When Adam’s not searching for the next story you can find him with his family at the beach, the park or teaching his son how to scroll through work email. Really, any day with the family is the best day.

Have a story idea? Feel free to send it his way: adam.racusin@10news.com.