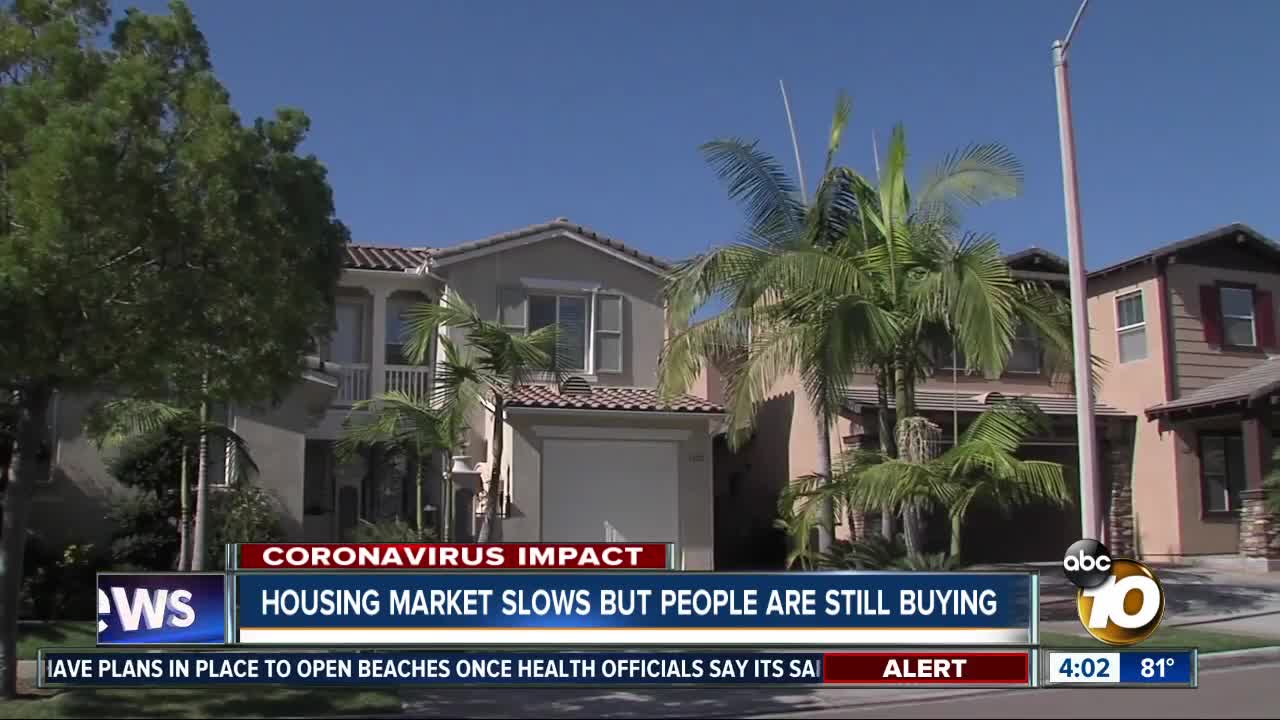 Ben and Megan Taylor are moving from Washington, D.C. to San Diego.

Without being able to get on a plane and see a house in person, they relied on a detailed virtual walk-through of the home and used a drone to give them feel for the neighborhood and community.

"The 3D tour is amazing," said Megan Taylor. "It's almost like you're there seeing the furniture, the dimensions, being able to measure things."

Technology is giving realtors the ability to do their jobs virtually.

"We're essentially creating really detailed and deep online assets that allow someone to explore the property as close to a real-life scenario as possible," said Dan Beer, owner, and CEO of Beer Home Team.

Beer explained there aren't as many homes on the market and they’re taking longer to move, but homes across California are selling.

"There's the people that want to move or aspire to move, a lot of them are on hold, but the people that have to move because of what we're calling ‘life events’ they are very much out there," he said.

According to a press release from the California Association of Realtors (C.A.R.), March's sales total was down 11.5% from the 421,670 level in February and was down 6.1% from a year ago. The month-to-month drop was the first double-digit loss in more than nine years and the largest since August 2007. Additionally, the year-over-year decline was the first in nine months and the largest decrease since March 2019.

"The relatively moderate sales decrease that occurred in March is only a prelude to what we'll see in April and May because sales were still modestly strong during the first two weeks of March before stay-in-place orders were implemented throughout the state," said 2020 C.A.R. President Jeanne Radsick, a second-generation realtor from Bakersfield said in the release.

MORE FROM THE REBOUND SAN DIEGO: Recruiter says persistence is key in job market amid coronavirus

"However, pending sales, which is a better reflection of the current market conditions and consumer concerns about the coronavirus, dropped nearly 25 percent and suggest the decline could extend beyond the next couple of months, depending on the duration of the pandemic and the lockdown," said Radsick.

San Diego-based realtor Justin Brennan with Brennan Real Estate Group Pacific Sotheby’s International Realty said if you're looking at buying a home to live in and have the financial means to support it, now is a good time.

"You have a lot of people, sellers, homeowners who say, hey I'm going to pull my home off the market, not even show it because I don't want anyone in my house," Brennan said. "Then you have a drop of 25-30% in the inventory. You still have enough buyers in the market currently that are kind of sucking that up so you're not seeing price dips."

For people in the market, there are protections if you lose your job during the buying process.

"It's a coronavirus disclosure if you're going into escrow, or if you're in escrow already, either way, it's a document that gets signed that does protect the buyer and the seller in the event that for whatever reason your job is lost, you're affected economically, whatever happens," Brennan said.

That takes you to the loan process.

According to the Mortgage Bankers Association (MBA), the Market Composite Index, a measure of mortgage loan application volume, decreased 0.3% on a seasonally adjusted basis from one week earlier.

"Mortgage applications were essentially unchanged last week, as a slight drop in refinance activity was offset by a 2% increase in purchase applications. California and Washington, two states hit hard by COVID-19, saw another week of rising activity -- partly driving the overall increase. Despite the weekly gain, the purchase index remained close to its lowest level since 2015, and was over 30 percent lower than a year ago," said Joel Kan, MBA's Associate Vice President of Economic and Industry Forecasting.

"The pandemic-related economic stoppage has caused some buyers and sellers to delay their decisions until there are signs of a turnaround. This has resulted in reduced buyer traffic, less inventory, and March existing-homes sales falling to their slowest annual pace in nearly a year," said Kan.

"What was a really good refi market a month ago has gotten tougher," said Scott Harmes National Manager at C2 Reverse.

Harms believes current mortgage rates are not in sync with other rates in the financial markets and should be much lower than they are right now.

Reporter Adam Racusin asked him if there's any danger to refinancing right now.

"The only danger to refinancing right now is rates. Once the credit market normalizes, rates should be dropping," Harmes said. "I'm hearing credible predictions from industry leaders that rates could be dropping into the twos."

Harmes said there was also a run on refinances before the pandemic, and consumers need to watch out for lenders that are backlogged.

He said if you have questions about your current loan or options, call your loan company and ask.