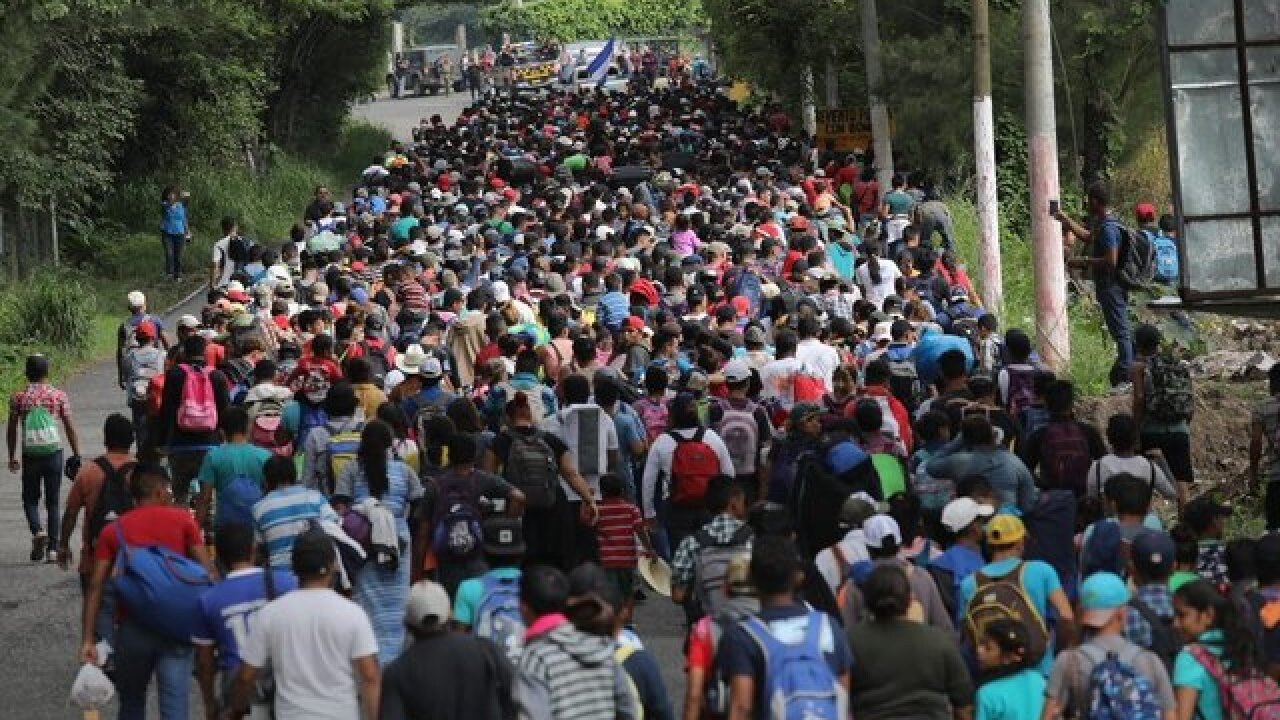 (KGTV) — As a caravan of migrants from Honduras marches through Mexico, participants have said they are determined to press on to Tijuana.

The caravan has also drawn daily discussions among U.S. leaders as to how to deal with the incoming group, who have said they plan to apply for asylum.

It's not clear how close the caravan will be when Election Day rolls around on Nov. 6, but the group's journey is expected to play a large part in the elections.

The caravan has said they fled Honduras because of the state of employment, quality of life, and the threat of crime they are faced with in the country — similar to a  caravan which came to the U.S.-Mexico border in Tijuana in April .

Here is a look at the caravan and actions by U.S. leaders since the group's journey began in October:

Oct. 15 — The caravan arrives at the Guatemala-Honduran border, facing a blockade by local police for nearly two hours. Police eventually allowed the migrants to continue through after they refused to turn back.

Oct. 16 — President Donald Trump tweets he's told Honduran President Juan Orlando Hernández, El Salvador, and Guatemala that "no more money or aid" will be given if they allow the caravan to continue to the United States.

Oct. 19 — Migrants reach the Guatemala-Mexico border and begin to request asylum in Mexico.

Oct. 20 — Battling sweltering heat while waiting to cross the border, some migrants begin to cross into Mexico using makeshift rafts to cross the Suchiate River and climbing over fences.

Oct. 21 — Crowds of migrants continue their journey north from the Mexican border town of Ciudad Hidalgo. Buses took migrants about 23 miles to shelters in Tapachula.

Oct. 24 — Another caravan is reportedly forming in El Salvador, bound for the U.S.-Mexico border. The migrants reportedly plan to leave on Oct. 31.

Oct. 23 — Migrants reach Huixtla, Mexico, about 50 miles from the Mexico-Guatemala border. The caravan remains an estimated month or more from the U.S. border.

Oct. 31 — Department of Defense says 7,000 troops will be deployed to the U.S. southern border based in Texas, Arizona, and California. Troops locally could be staged at Marine Corps Air Station Miramar, Camp Pendleton, Naval Base Coronado, Naval Base San Diego, and Naval Base Point Loma. Troops may be moved by the end of the week.

Oct. 31 — President Trump says troop deployment to the southern border could total as high as 15,000 troops before the caravan arrives, which remains about 1,000 miles away Wednesday. Anywhere from 3,500 to 10,00 individuals now estimated to make up the caravan.