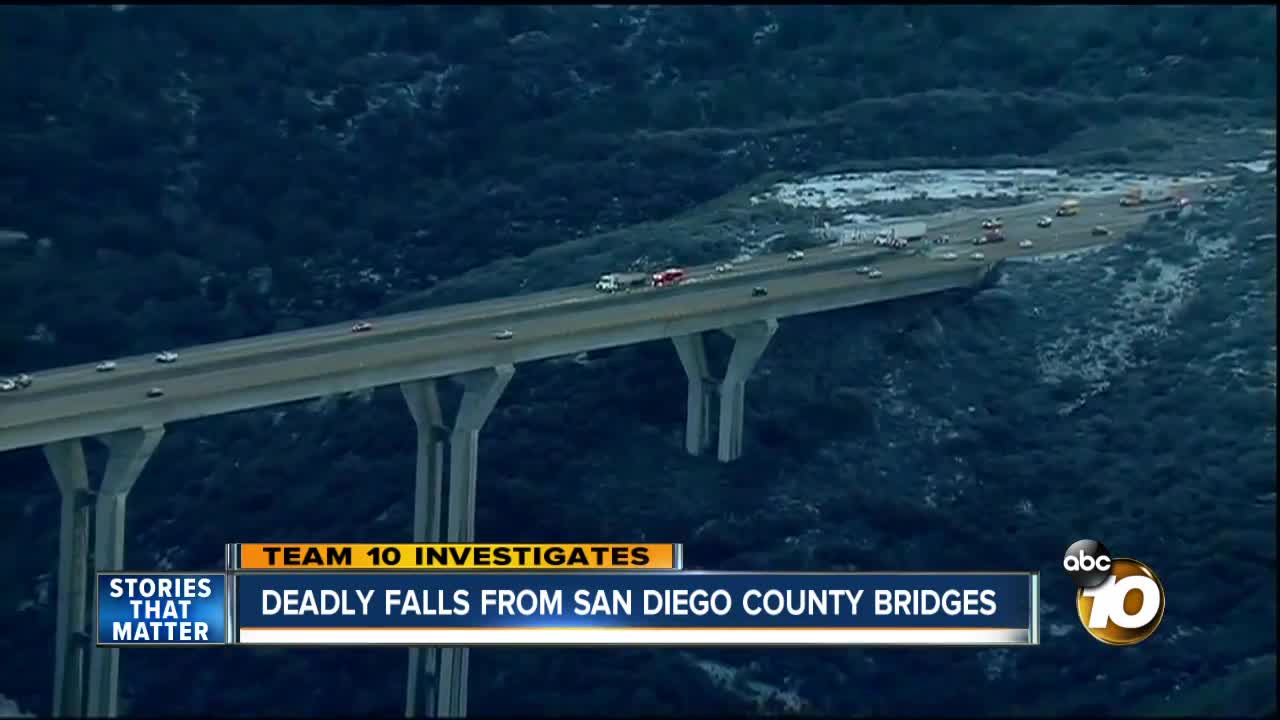 There are calls for safety improvements to local bridges after three people died from falling off of San Diego area bridges in less than a year. SAN DIEGO (KGTV) - There are calls for safety improvements to local bridges after three people died from falling off of San Diego area bridges in less than a year.

That alarming number sparked a Team 10 investigation to examine if there’s more that can be done to keep people safe.

Towering above the ground, bridges can be looked at as modern architectural masterpieces, elegant structures performing a simple function. But, as with any other stretch of roadway, there can be deadly outcomes.

Feb. 6, 2019, is a day Gwendolyn Sneed will never forget. Her partner of 20 years, Bob Bruno, had left their Jacumba Hot Springs home headed to work in San Diego.

"I woke up to some missed calls from his work, so I called his manager and he had not made it to work,” she said.

Sneed said she came across a story on the news; an accident on the Pine Valley Bridge. She saw Bruno's car being towed away in the video.

RELATED: Good Samaritan who died after stopping to help a driver on I-8 in Pine Valley identified

Sneed started checking with local hospitals but there was no sign of Bruno.

"I get in the car and start driving to the bridge and about 15 minutes into the drive, the medical examiner called and asked me to pull over,” she said.

Her partner of two decades was gone.

"It was as if I could imagine before he died, life flashes before your eyes, they say, is kind of what happened to me at the moment,” she said.

Bruno died, not in the accident on the bridge, but while trying to help a family in need. He'd seen a vehicle stopped on the side of the bridge and pulled over to help. Sneed said a family with a baby was stranded. Bruno was in the process of helping move the baby seat when a Ford F-150 pickup truck drove over a patch of ice and barreled toward Bruno.

Bruno jumped out of the way to avoid being hit, but instead of landing on solid ground, he hopped over the side of the bridge guardrail and fell into the canyon below.

"I think Caltrans just needs to take a look at what the safety measures could be, lighting, higher guard rails, I don't know what that is, signage,” Sneed said.

While Bruno's incident is tragic, Team 10 discovered two other unrelated incidents where people lost their lives falling off of San Diego area bridges in the span on a year.

In September, Caltrans Highway Maintenance Lead Worker William Casdorph fell while he and his crew were doing maintenance work on the southbound State Route 163 overcross to southbound Interstate 805. He sustained significant injuries and died at the hospital.

"Our Caltrans family is grieving today,” Caltrans Director Laurie Berman said at the time. “Our deepest sympathy and condolences go out to Mr. Casdorph’s family and all those who worked with him."

Casdorph was based at the Kearny Mesa maintenance facility in San Diego and was a 19-year veteran of Caltrans.

In April 2018, Martin Lapisch fell to his death from State Route 125 in the Bonita area after a crash in which his car struck and killed a deer on the freeway.

Authorities said it appeared he jumped over the side of the bridge, possibly to get to a safe location, and didn't realize there was a 40-foot drop.

"At this time of day, it's pitch-dark out here. He couldn't have seen over the side,” California Highway Patrol Sgt. Steve Jio said at the time.

Those are the incidents Team 10 identified.

Investigator Adam Racusin asked Caltrans about safety when it comes to bridges and overpasses.

"We are always looking for improvements of safety whether it's on our bridges or our regular highways,” said Caltrans Headquarters Division Chief of Maintenance Dennis Agar.

Agar said the agency always talks about incidents or close calls and how to prevent them. They even travel to other states to see how they handle safety.

"We make sure we do everything we can to address the concerns, especially with safety that brings up to our office and we try to address it statewide,” he said.

Sneed said it's human nature to want to blame someone or something, but she doesn't want to focus on that. Instead, her energy is focused on safety.

"Let's prevent this from happening again, I know Bob would want that,” she said.