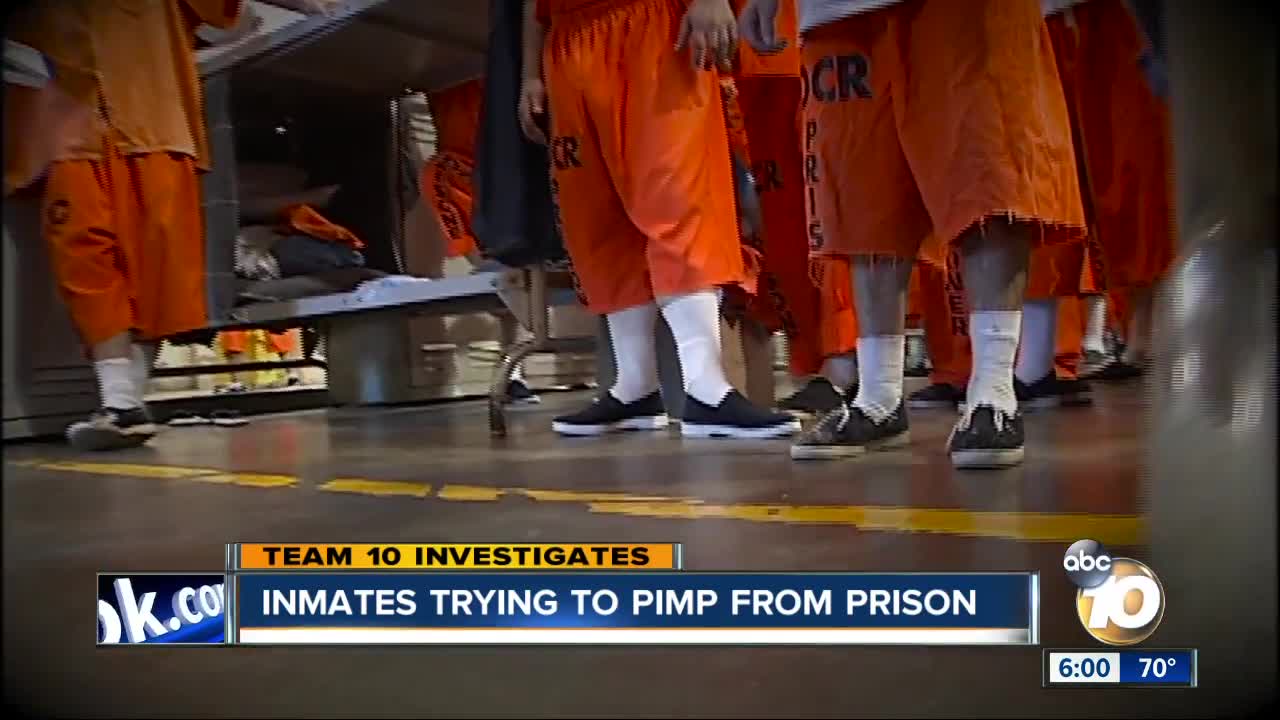 Just beyond the gates to Richard J. Donovan Correction Facility are rows of chain-linked fence topped with razor wire. Guard towers surround the complex southeast of San Diego; signs display a warning of no trespassing.

The elaborate security set-up is designed to keep inmates in, but those serving time have discovered they don't need to be beyond the walls to inflict havoc on the world outside.

Inmates are using cell phones and social media accounts to try and pimp women on the outside.

"They will work these girls and women outside of prison," said San Diego County Deputy District Attorney Carolyn Matzger. For the past six years, she's been in the sex crimes and human trafficking division.

"It's something that we definitely realized is happening," she said.
Matzger authored an article in "Law Enforcement Quarterly" profiling the first prison trafficking case the San Diego Human Trafficking Taskforce handled.

According to the article, a detective in Arizona saw a social media profile with pictures of a man in prison clothes. "The detective, using an undercover social media account of a fake 18-year-old woman, sent a message to the inmate Wendell Bullock."

"So he was serving a rape sentence and trying to work women while he was in prison," Matzger said.

Court paperwork obtained by 10News shows Bullock identified himself as a pimp during the communication with the detectives. He asked if they had escorted before and told them they could make money together.

Bullock made statements that the female's job was to make money and Bullock would be responsible for posting the ads and for keeping her safe.

According to the documents, Bullock would tell the girls what to say on the phone and what to look out for. Bullock told one of the females that she would not be having sex for less than $150.

"It's the promises they make of, 'Hey this is a quick buck. You could make good money doing this. I believe in you,'" Matzger said. "They often say to these women, 'I believe in you.'"

This scheme ended with Bullock pleading guilty. He got an additional 10 years behind bars for pandering.

In his plea agreement, Bullock wrote that he unlawfully encouraged the undercover detective to become a prostitute by using promises or device or scheme.

"Cellphone use by inmates can pose a security risk. Modern cell phones can record video and audio, and connect to the Internet. Additionally, contraband cellphones in state prisons can be used to facilitate or commit crimes, including illicit gang activity," said Vicky Waters, CDCR Press Secratary.

"The department has implemented many strategies to curb introduction and use of contraband cellphones, including the Managed Access System (MAS) or jamming/interruption technology, K-9s trained to detect cellphones, the use of parcel scanners, low-dose full-body scanners, metal detectors, etc., which provide a good foundation for preventing contraband from entering the institutions. Also, under CDCR regulations, inmates are prohibited from internet access. Thus, this implicitly bars inmates from access to social media since internet access is required in order to access such social media. Given the prohibition on internet access and also the fact that inmates are barred from possessing cellphones or wireless communication devices, the manner in which California inmates access social media is in violation of the law," said Waters.

In the San Diego County region, sex trafficking is an $800 million business annually.

Traffickers can make anywhere from half a million dollars on up.

The average age of someone who's recruited is 16-years-old.

Matgzer says kids are recruited from every neighborhood in the county. As for what motivates the pimps, Matzger won't speculate. In prison, inmates have a lot of time and are looking for ways to make money, says Matzger.

Despite being behind bars, inmates can still have a lot of influential power inside and outside the correctional facility.

"They can do these blasts really quick for them to reach a lot of people and they only need one or two people to bite, and then they've got a business," Matzger said.

Since Bullock's case, the human trafficking task force investigated four inmates in three other state prisons who are suspected of using cell phones to traffic.

Two of those inmates have already been brought to San Diego County to be prosecuted.