Four deadly incidents in more than a year 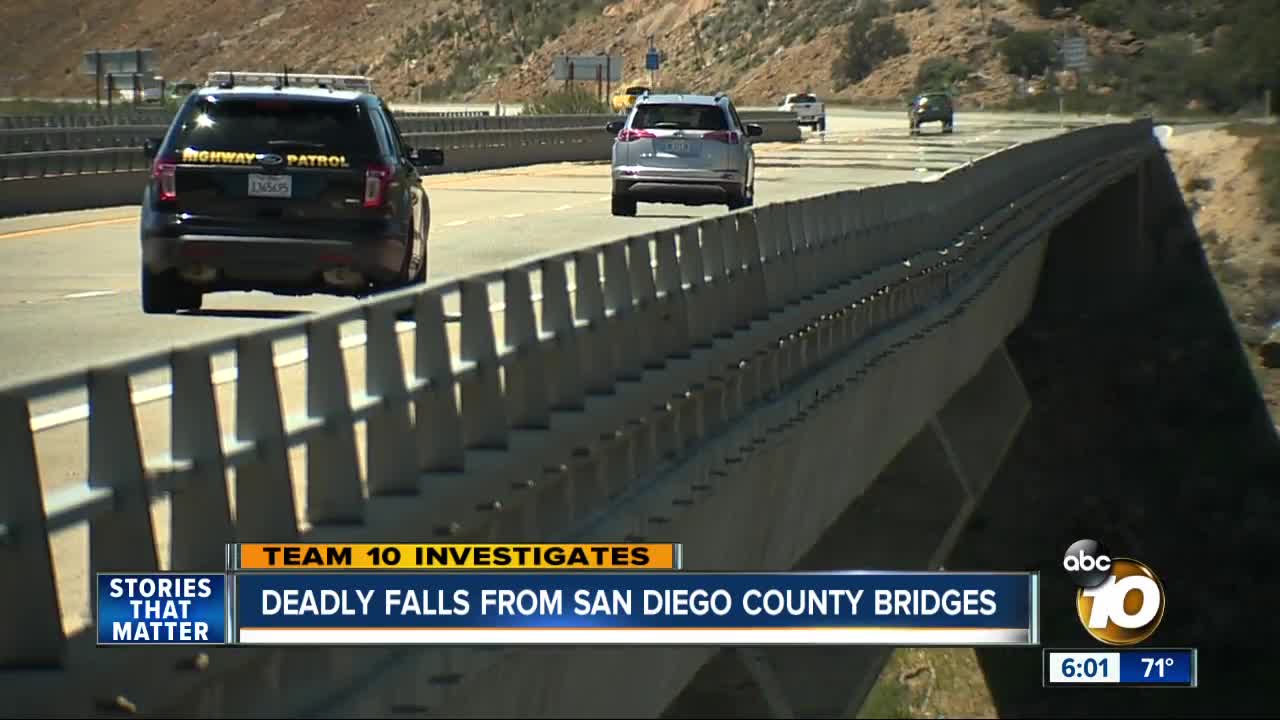 Two men died after authorities said they jumped from a bridge following a car crash on a Carmel Valley freeway. SAN DIEGO (KGTV) - Two men died after authorities said they jumped from a bridge following a car crash on a Carmel Valley freeway.

It's the fourth incident where someone has died after falling off of a San Diego area bridge in a little more than a year.

In April Team 10 spoke to Gwendolyn Sneed. Her partner of 20 years, Bob Bruno, died in a tragic incident at the Pine Valley Bridge.

Bruno died, not in the accident on the bridge, but while trying to help a family in need. He'd seen a vehicle stopped on the side of the bridge and pulled over to help. Sneed said a family with a baby was stranded. Bruno was in the process of helping move the baby seat when a Ford F-150 pickup truck drove over a patch of ice and barreled toward Bruno.

Bruno jumped out of the way to avoid being hit, but instead of landing on solid ground, he hopped over the side of the bridge guardrail and fell into the canyon below.

"I think Caltrans just needs to take a look at what the safety measures could be, lighting, higher guard rails, I don't know what that is, signage," Sneed said at the time.

While Bruno's incident is tragic, Team 10 discovered two other unrelated incidents where people lost their lives falling off of San Diego-area bridges in the span on a year.

In September 2018, Caltrans Highway Maintenance Lead Worker William Casdorph fell while he and his crew were doing maintenance work on the southbound State Route 163 overcross to southbound Interstate 805. He sustained significant injuries and died at the hospital.

In April 2018, Martin Lapisch fell to his death from State Route 125 in the Bonita area after a crash in which his car struck and killed a deer on the freeway. Authorities said it appeared he jumped over the side of the bridge, possibly to get to a safe location, and didn't realize there was a 40-foot drop.

In April, investigator Adam Racusin asked Caltrans about safety when it comes to bridges and overpasses.

"We are always looking for improvements of safety whether it's on our bridges or our regular highways," Caltrans Headquarters Division Chief of Maintenance Dennis Agar said at the time.

Agar told 10News the agency always talks about incidents or close calls and how to prevent them. They even travel to other states to see how they handle safety.

"We make sure we do everything we can to address the concerns, especially with safety that brings up to our office and we try to address it statewide," he said in April.

On Wednesday Team 10 asked Caltrans if there are any safety measures the agency is looking at to try and prevent this type of tragedy.

Late Wednesday afternoon Caltrans Public Information Officer Edward Cartagena released a statement saying, "Caltrans extends its sympathies to the families of the deceased and hopes for a quick recovery for the injured. Although Caltrans will be looking into this incident, we want to allow the CHP to conduct and conclude their investigation."

The California Highway Patrol says if your vehicle gets stuck on a bridge try and get to a safe location. If that's not possible, the best thing to do is stay in your vehicle with your seatbelt on and calls 911.