San Diego firefighters were ready to spring into action after this morning's earthquake struck.

The quake was centered 11 kilometers north of Cabazon and struck at 4:49 a.m., according to the U.S. Geological Survey.

An aftershock measured at 3.2 magnitude followed minutes later. It was centered in the same region, the USGS reported.

Caltech seismologists said the quake occurred under the San Bernardino Mountains near part of the San Andreas fault. The area is known as the “San Gorgonio knot” because many small faults intersect there.

The area around Mt. San Gorgonio is the only part of the San Andreas fault that produces smaller quakes, experts said. The largest was a 6.0 quake in Desert Hot Springs in 1948.

The earthquake had no relation to the Hawaii quakes and volcanic eruption, seismologists said.

There were no immediate reports of damage in Cabazon, a desert city along Interstate 10 best known for its outlet malls.

In response, San Diego Fire-Rescue Department officials directed firefighters to remove all trucks, engines and other apparatus from stations across the city.

"Stand by for communications with your battalion chiefs for injuries and damage assessment," fire dispatchers broadcast to all stations. Preliminary reports from firefighters suggested there was no damage in San Diego.

The USGS has tools to indicate where it was felt in Southern California, including a 'did you feel it' tracker. 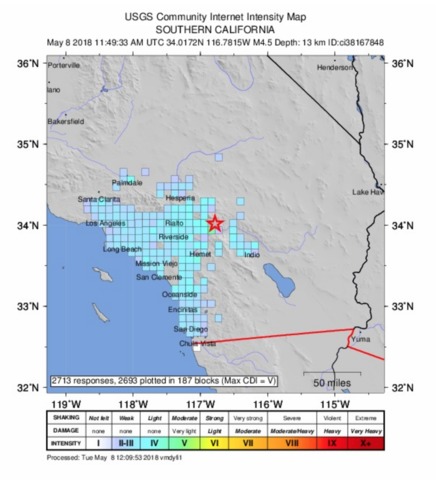