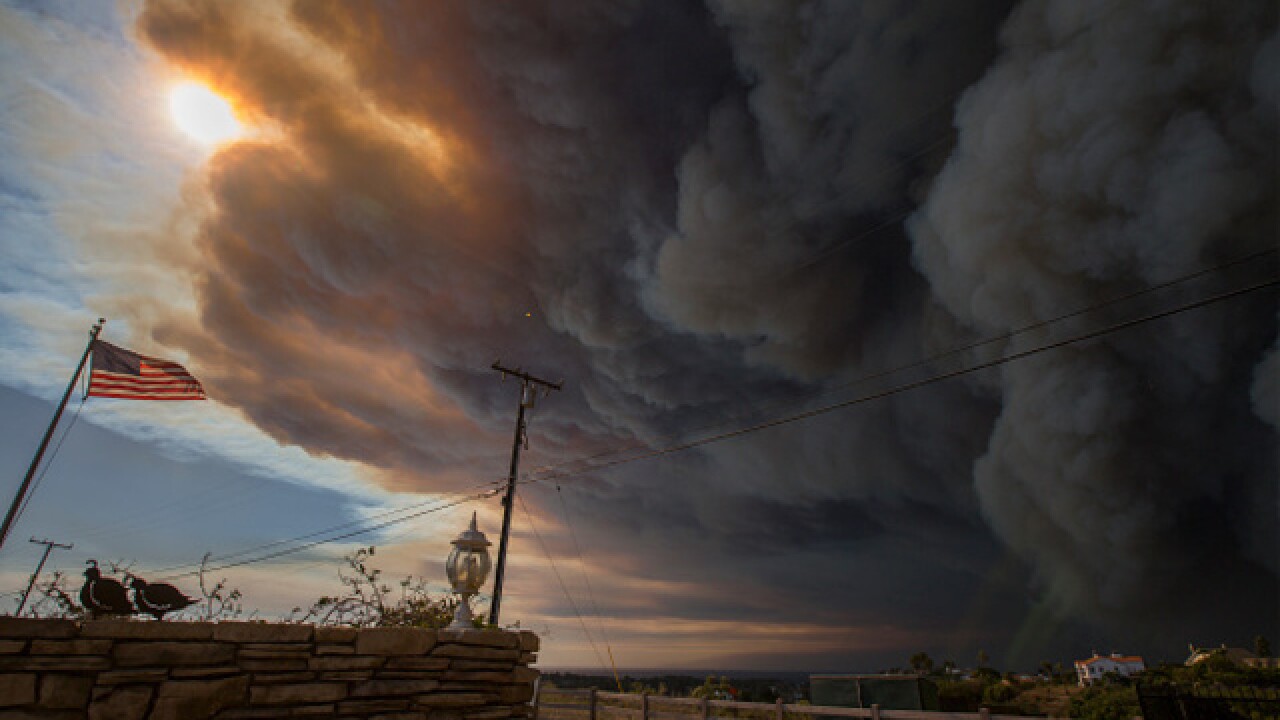 Copyright 2018 Scripps Media, Inc. All rights reserved. This material may not be published, broadcast, rewritten, or redistributed.
David McNew
MALIBU, CA - NOVEMBER 09: A massive smoke plume, powered by strong winds, closes in during the Woolsey Fire on November 9, 2018 in Malibu, California. About 75,000 homes have been evacuated in Los Angeles and Ventura counties due to two fires in the region. (Photo by David McNew/Getty Images)

(KGTV) — Several fires burned across California this week, from the deadly Camp Fire in the northern portion of the state to the devastating Woolsey Fire in southern California.

Here's how the fires were chronicled across social media:

One of our deputies took this picture. The smoke plume for the #CampFire is massive and foreboding. #buttecounty #wildfire #paradiseca pic.twitter.com/pjiBBE8z71

These abandoned and burned out cars shows you what a panic it must have been for residents trying to escape the Camp Fire. Unreal scenes in Paradise, CA, this morning. #CampFire pic.twitter.com/AhBuWzS0Tx

As I was getting into Paradise this morning I came across a firefighter who found an injured cat. He was holding tightly onto the cat while animal control arrived. #CampFire @abc7newsbayarea #abc7now pic.twitter.com/qtX7tWpAcM

With my troops at the #campfire Thursday night, spotted the American Flag still standing amidst the flames pic.twitter.com/z22nyJsCs7

This was me and my family escaping Paradise yesterday. We were so close to the flames that I could feel the heat through the car. Fortunately me and my family made it out alive. Sadly my house and the town I was born and raise in is gone. I can't believe this happened. #CampFire pic.twitter.com/MbXNLca0HN

VIDEO: @LACoFireAirOps Firehawk helicopter flying along Pacific Coast Highway in Malibu on the way to protect life and property. This is a historic event. Please follow the direction of local authorities. (Original video, ok to use with credit) @VCFD @LACoFD #WoolseyFire pic.twitter.com/SvZSfipzfk

Spoke with a Cal Fire firefighter who said they've been working since the #Woolseyfire started around 2:40pm Thursday. #thankyou @10News pic.twitter.com/IQEiIOw9z7

#WoolseyFire *UPDATE* Approx. 35,000 acres, 0% contained, very significant number of homes in the operational area damaged or destroyed by fire. More than 200,000 residents and 75,000 homes under mandatory evacuation. 0700 @CAL_FIRE will assume command of this fire. pic.twitter.com/axqnQKYjYQ

Scariest drive of my life! Driving into #HillFire minutes before they shut down the 101. Fire jumped freeway. Absolutely #apocalyptic pic.twitter.com/gLDCAA89Gx

The 10,000-acre #HillFire is being driven south/southwest by 25-35 mph winds. Capt. Ziegler said fire conditions today are identical to those during the 2013 Camarillo Spring fire. There's no telling where they'll stop it. He said it wouldn't surprise him if it burned to the sea. pic.twitter.com/s5XAfvrXr6