SAN DIEGO (KGTV) — As San Diegans ready their votes for the fate of Mission Valley's SDCCU Stadium site, a new poll indicates the likelihood of competing measures for the area.

In a 10News/San Diego Union-Tribune poll conducted by SurveyUSA, Measure E, also known as the Soccer City Initiative, currently trails 3 to 2 among those surveyed.

Measure G, known as SDSU West, leads 2 to 1 among those surveyed.

According to the survey, when asked whether respondents would vote on the Soccer City initiative, 32 percent said yes while 48 percent said no. Twenty percent were not sure.

When asked the same of the SDSU West initiative, 57 percent said they would vote yes, while 26 percent said no. Seventeen percent were not sure.

Measure E would have the city lease 233 acres of the SDCCU site and 20 acres of the Chargers' former Murphy Canyon facility for a soccer stadium or mixed-use soccer and football stadium, housing, and office and retail space. Investors would eventually be allowed to buy 80 acres of the leased land.

Measure G intends to have the city sell 133 acres of the site to San Diego State University for a football stadium, housing, and some office and retail space. The school would also develop a river park, though the city would retain ownership of that.

Which of the following is the main reason you support Measure G, SDSU West? For the soccer stadium or Major League Soccer team? Housing? Entertainment and commercial options? A stadium for SDSU football? Research facilities? The expansion of the SDSU campus? The river park? Or for some other reason? 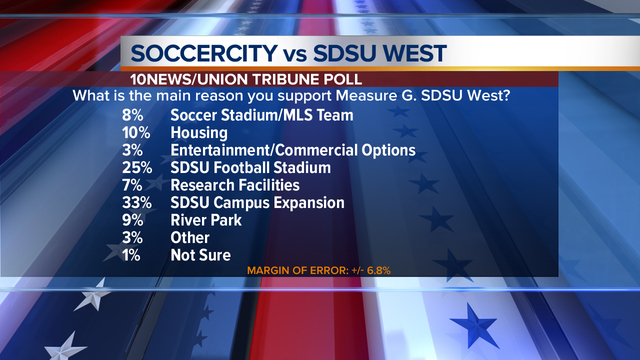 Which of the following is the main reason you support Measure E, SoccerCity? For the soccer stadium or Major League Soccer team? Housing? Entertainment and commercial options? A stadium for SDSU football? Research facilities? The expansion of the SDSU campus? The river park? Or for some other reason? 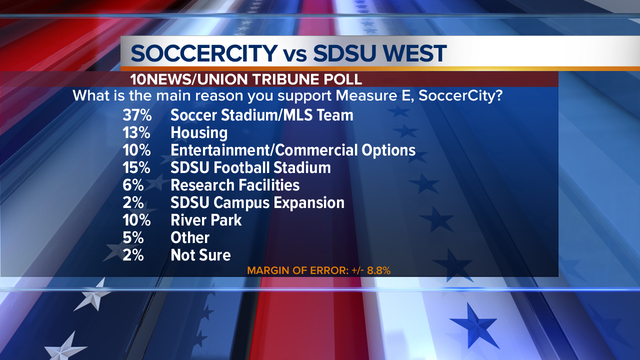 The survey interviewed 800 San Diego adults between Oct. 7 and Oct. 10. Of those, 700 were registered to vote. SurveyUSA identified 618 who are likely to return a ballot before the Nov. 6 deadline.

This research was conducted using a blended sample, mixed mode. Respondents were reached over the home phone or cell phone.