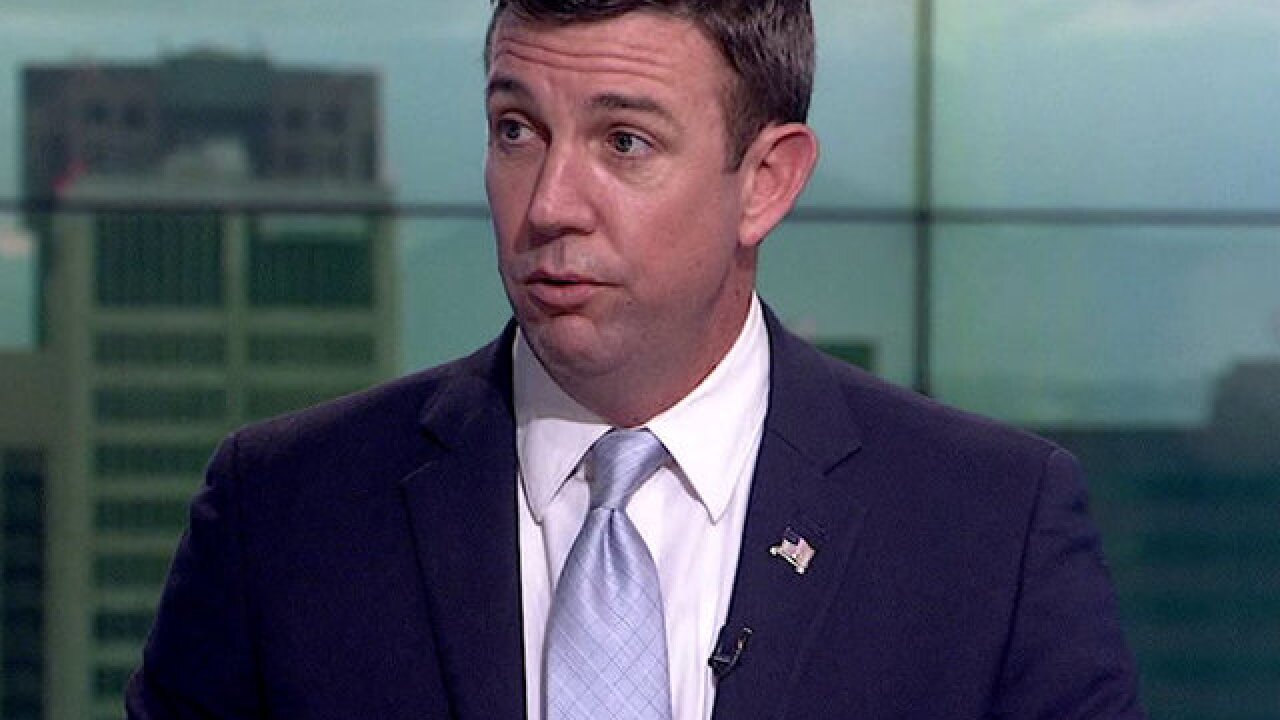 The Republican congressman, who represents California's 50th District, told 10News anchors Virginia Cha and Jason Martinez that he was "not worried" about a recent Politico article that included allegations that he was drinking on the job and having relationships outside of his marriage.

"This is politics. There is a liberal slant to media. If they can't beat you in an election, this is how they try to beat you. You're going to have slanderous, salacious stories about everybody. When you do it anonymously without a single source cited, I'm not worried," Hunter said.

Hunter told 10News he would be running for re-election even under the shadow of a Department of Justice investigation.

"There was wrong campaign spending, but it was not done by me. I have trust in the justice system despite what's going on with Trump and Mueller, and the anti-Republican, pro-Democrat forces within the Department of Justice, at the highest levels, and the FBI, at the highest levels. I'm optimistic on the outcome … it's been a year, that's a long time," said Hunter.

The congressman added, "We run every two years like it's our first election, so it doesn't matter … I'm going to focus on things that I'm doing. I'm out in the district every day, meeting with people. What you see out of the [San Diego] Union-Tribune or Politico is different than what you see with me."

When asked why there has been so much directed at him, Hunter said: "I'm an easy target. I'm not a typical politician. I'm younger and a hard-charger. I'm here to get stuff done, not to play politics. I don't mince words; I'm here to be blunt, to the point [and] tell people what I believe in and see if people want to vote for me."

The Politico article alleged Hunter was dealing with post-traumatic stress disorder (PTSD) and an alcohol problem, but the congressman denied the allegations.

"I did three tours. I take my experiences with me, but I never filed for post-traumatic stress … it's not an issue," he said.

Hunter also weighed in on the white-hot topic of national gun control, which has been brought to the forefront following the Feb. 14 mass shooting at a Florida high school.

Hunter said he believes teachers should be armed to protect their students.

"I'm all for it. I think if you're a former law enforcement officer or military, and you're a school teacher, you owe me, as a father, to carry a weapon. You owe it to the parents to be there to protect these children. There's no other way you're going to stop this kind of violence. Unless you put God back in the world and make people love one another again, you're not going to stop this."

He added, "Arming teachers would be a very easy, smart move if teachers want to do it and they're trained to do it."

"There's also something we're working on, something like a 'panic button' for your phone that sends out a signal to the 10 closest law enforcement personnel … that would get people to schools or a church or any place where there is a mass shooting much faster [than calling a police station]," he told 10News.

President Trump Thursday morning called for stronger background checks and proposed raising the gun-buying age to 21, to which Hunter responded:

"If you want to raise the military age to 21. You can serve the country, vote, die for your country, but you can't come home and buy a civilian version of a weapon you used overseas … that's a discussion we're going to have to have."

Following his on-set interview, Hunter offered more thoughts on the gun control debate and the DOJ probe in a Facebook interview.

Asked to speak further on arming teachers at schools, Hunter told 10News' Renee Nelson, "I think arming teachers that are former law enforcement, former military folks, I'm for that 100 percent. It's incumbent upon you to protect my kids. I want you to care … Nobody is getting shot in these school shootings after an armed presence arrives."

Hunter said of Florida school shooting suspect Nikolas Cruz: "He had some major issues. He had no love in his life, no God in his life. That's one of the things that I think leads to these things happening. Everything he did was premeditated, from pulling the fire alarm to trying to escape with the kids. So he wasn't some crazy guy that flipped out. He had a plan."

When asked if the DOJ's investigation is a distraction, Hunter said, "No, I don't actually talk about it. The only people that ask are media people who want to get ratings. You [have to] get headlines, right?"

Hunter shared his thoughts on the government funding, saying, "We're going to build the border wall. I'm going down today to look at prototypes with the Border Patrol, and the military finally gets funding after years of inadequate funding."

The congressman was then asked to weigh in on the current "#MeToo" movement. He said, "I think people are more cognizant of men and women being different. I'm still not one of the guys who's going to open up the doors because I'm meeting with a woman, as opposed to keeping them closed when I'm meeting with anyone else. Many people want to be more safe than sorry. Just don't sexually assault people, and then you'll be safe. If you don't do it, you'll be OK."