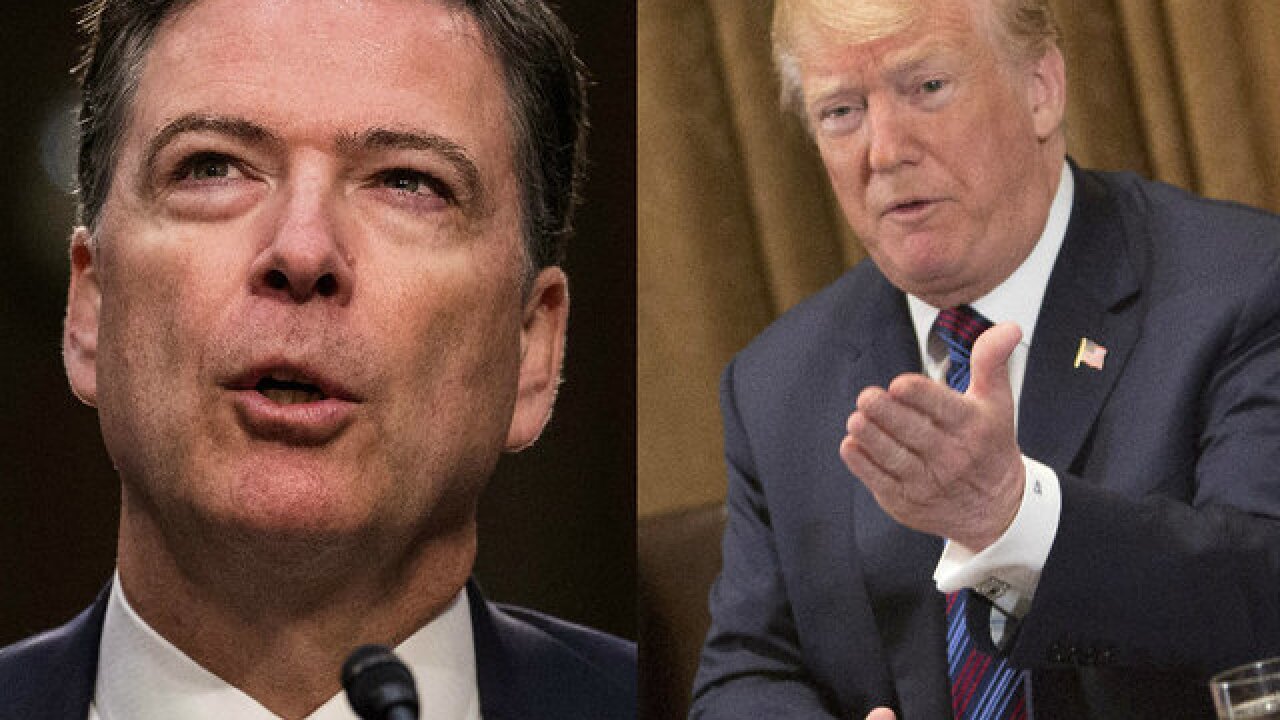 Comey makes stunning revelations in ABC News interview
-- In an interview that has America buzzing, James Comey spoke on President Trump’s character and addressed the 2016 election, his own firing and the ongoing Russia investigation in an exclusive sit-down interview with ABC News’ George Stephanopolous.

"So you're thinking, 'President Trump is a liar?'":


"He is morally unfit to be president":

Trump reacts to Comey’s ABC interview
-- President Trump took to Twitter to offer his thoughts on his former FBI director James Comey after his interview with ABC News.

Trump tweeted early Monday morning: “Comey drafted the Crooked Hillary exoneration long before he talked to her (lied in Congress to Senator G), then based his decisions on her poll numbers. Disgruntled, he, McCabe, and the others, committed many crimes!”

Comey drafted the Crooked Hillary exoneration long before he talked to her (lied in Congress to Senator G), then based his decisions on her poll numbers. Disgruntled, he, McCabe, and the others, committed many crimes!

On Sunday night, ABC aired an interview with Comey, who is promoting his new book, " A Higher Loyalty," in which he declares the president to be morally unfit to lead the nation.

Trump did not explain the "many crimes" he alleges that Comey and McCabe committed and there is no evidence that they have done any wrongdoing.

Last summer, Senate Judiciary Chairman Chuck Grassley and Sen. Lindsey Graham, R-South Carolina, said Comey drafted a statement exonerating former Secretary of State Hillary Clinton for running her government emails through a private email server before completing the investigation. Comey had testified before Congress that his decision to make the public announcement in July 2016 -- something that rarely happens when investigators decide not to pursue charges -- came because of political pressure he said he felt from Attorney General Loretta Lynch to downplay the investigation.

Comey also testified last year that he gave some of his memos of conversations he had with Trump to a Columbia University professor, but that he had written the memos specifically to avoid including classified information.

A Justice Department report released last week found that McCabe "lacked candor" on four occasions when discussing the disclosure of information in a news report regarding the FBI's Clinton Foundation investigation. A lawyer for McCabe has disputed the report's conclusions.

Trump was on the offensive even before the interview aired, attacking Comey in a series of tweets on Sunday.

Unbelievably, James Comey states that Polls, where Crooked Hillary was leading, were a factor in the handling (stupidly) of the Clinton Email probe. In other words, he was making decisions based on the fact that he thought she was going to win, and he wanted a job. Slimeball!

The big questions in Comey’s badly reviewed book aren’t answered like, how come he gave up Classified Information (jail), why did he lie to Congress (jail), why did the DNC refuse to give Server to the FBI (why didn’t they TAKE it), why the phony memos, McCabe’s $700,000 & more?

Comey throws AG Lynch “under the bus!” Why can’t we all find out what happened on the tarmac in the back of the plane with Wild Bill and Lynch? Was she promised a Supreme Court seat, or AG, in order to lay off Hillary. No golf and grandkids talk (give us all a break)!

I never asked Comey for Personal Loyalty. I hardly even knew this guy. Just another of his many lies. His “memos” are self serving and FAKE!

Slippery James Comey, a man who always ends up badly and out of whack (he is not smart!), will go down as the WORST FBI Director in history, by far!