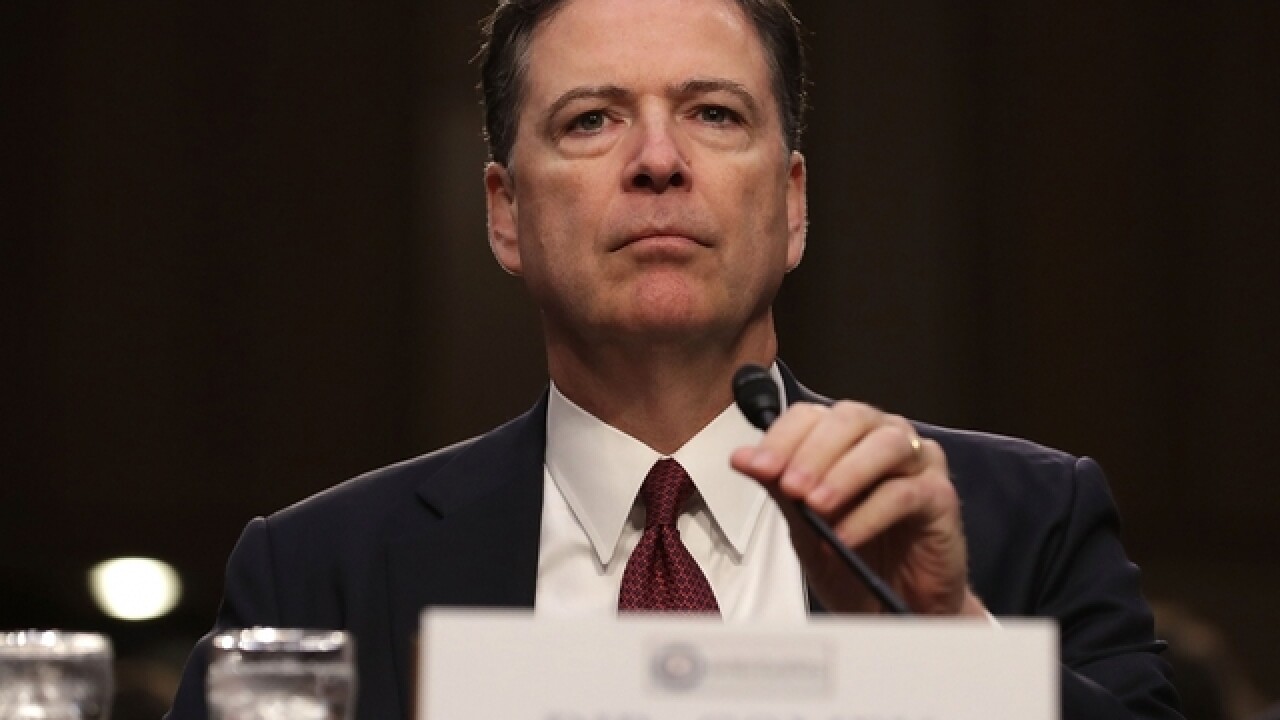 WASHINGTON (AP) - Former FBI Director James Comey says he thinks it's possible the Russians have compromising information on President Donald Trump, that there is "some evidence of obstruction of justice" in the president's actions and that Trump is "morally unfit" for office.

Comey's comments in an ABC News interview broadcast Sunday were almost certain to escalate his war of words with the president and further erode a relationship marked by open hostility and name-calling.

Trump adviser Kellyanne Conway criticized Comey on Monday, accusing him of peddling a "revisionist version of history" and sinking into the "gutter" with petty comments about the size of Trump's hands and the length of his tie. "He looked a little shaky," she offered on ABC's "Good Morning America."

Hours before the interview was shown, the president, who fired Comey last year, unleashed a Twitter outburst that labeled Comey "slippery," suggested he should be put in jail and branded him "the WORST FBI Director in history, by far!"

Comey's televised remarks, coupled with the release of his forthcoming book, offer his version of events surrounding his firing and the investigations into Russian election meddling and Hillary Clinton's email practices. Several of the episodes he describes in detail, including a private conversation about former White House national security adviser Michael Flynn, are central to special counsel Robert Mueller's investigation and his recollections are presumably valuable for prosecutors examining whether the president's actions constitute obstruction of justice.

POLL: What do you think of James Comey's beliefs in his ABC News interview?

The FBI director, who until his firing last May led an investigation into possible ties between Russia and the Trump campaign, acknowledged that it was "stunning" to think that Russia could have damaging information about an American president. But he said that in Trump's case, he could not discount the possibility that the president had been compromised.

"These are more words I never thought I'd utter about a president of the United States, but it's possible," Comey told ABC News' chief anchor George Stephanopoulos. He also acknowledged he had no proof that Russia has dirt on Trump: "I think it's possible. I don't know."

He also answered "possibly" when asked if the president was attempting to obstruct justice when he cleared the Oval Office of other officials last February before encouraging him to close the investigation into Flynn, who by that point was suspected of lying to the FBI about his Russian contacts. The retired general pleaded guilty in December and is now cooperating with Mueller's investigation.

Comey also said he believed that Trump was "morally unfit" to be president and that he treated women like "pieces of meat."

"A person who sees moral equivalence in Charlottesville, who talks about and treats women like they're pieces of meat, who lies constantly about matters big and small and insists the American people believe it -- that person's not fit to be president of the United States, on moral grounds," Comey said.

READ THE FULL TRANSCRIPT OF THE ABC INTERVIEW

Trump on Sunday rejected Comey's assertion that Trump had sought his loyalty at a January 2017 dinner, saying "I hardly even knew this guy. Just another of his many lies." He also suggested Comey should be imprisoned, tweeting, "how come he gave up Classified Information (jail), why did he lie to Congress (jail)." There is no indication Comey is under investigation for doing either.

Asked if the president wanted the Justice Department to investigate Comey, White House spokeswoman Sarah Huckabee Sanders said Sunday on ABC's "This Week" that she was not aware of a specific request. But, she said, "if they feel there was any wrongdoing, they should certainly look into that just as they do on a number of other topics."

But the president's attacks on Comey began even before the interview came out.

He seized on an excerpt shown Saturday in which Comey said his belief that Clinton would beat Trump in the 2016 presidential election was probably a factor in his decision to disclose the investigation into her emails. Comey, Trump tweeted, "was making decisions based on the fact that he thought she was going to win, and he wanted a job. Slimeball!"

That argument was startling given that Comey's handling of the email investigation, including his disclosure shortly before the election that the FBI had reopened its probe, enraged Democrats. After Clinton's loss, many Democrats blamed Comey, and Clinton herself has said it hurt her election prospects.

Comey again defended his actions, telling ABC that he made what he thought was the best decision at the time. Comey said he did not remember "consciously thinking" about the election results as he decided to disclose that the FBI had reopened its investigation into candidate Clinton's email use. But, he acknowledged, "I was operating in a world where Hillary Clinton was going to beat Donald Trump, and so I'm sure that it was a factor."

"I don't remember spelling it out," he added, "but it had to have been that she's going to be elected president and if I hide this from the American people, she'll be illegitimate the moment she's elected, the moment this comes out."

Former Attorney General Loretta Lynch pushed back against Comey's criticism in the book that, early in the Clinton email inquiry, she had instructed him to refer to it as a "matter" rather than an "investigation." In a statement Sunday, Lynch said she was simply following longstanding Justice Department protocol against confirming or denying the existence of an investigation.

Trump fired Comey in May 2017, setting off a scramble at the Justice Department that led to the appointment of Mueller as special counsel overseeing the Russia investigation. Mueller's probe has expanded to include whether Trump obstructed justice by firing Comey. So far, 19 people -- including Flynn and Trump's former campaign chairman, Paul Manafort -- have been charged in the investigation. Flynn and two of the president's campaign aides, Rick Gates and George Papadopoulos, have pleaded guilty and are cooperating with Mueller.

Asked whether he believed Trump ought to be impeached, Comey replied, "I hope not because I think impeaching and removing Donald Trump from office would let the American people off the hook and have something happen indirectly that I believe they're duty bound to do directly. People in this country need to stand up and go to the voting booth and vote their values."

He added: "But you cannot have, as president of the United States, someone who does not reflect the values that I believe Republicans treasure and Democrats treasure and independents treasure. That is the core of this country. That's our foundation. And so impeachment, in a way, would short circuit that."