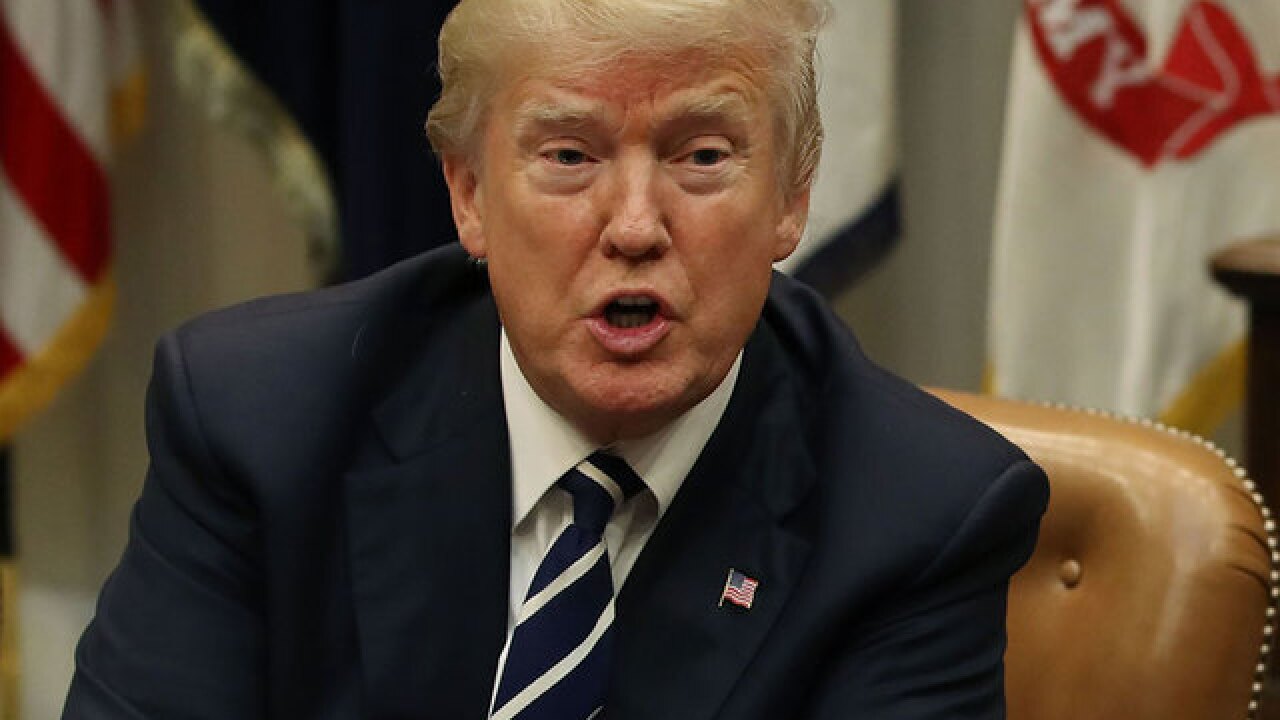 Trump on reported "s***hole" comment: "Not the language used"
-- President Trump offered his response to a report that he used vulgar terms in describing certain countries during a bipartisan meeting on immigration.

The so-called bipartisan DACA deal presented yesterday to myself and a group of Republican Senators and Congressmen was a big step backwards. Wall was not properly funded, Chain & Lottery were made worse and USA would be forced to take large numbers of people from high crime.....

....countries which are doing badly. I want a merit based system of immigration and people who will help take our country to the next level. I want safety and security for our people. I want to stop the massive inflow of drugs. I want to fund our military, not do a Dem defund....

....Because of the Democrats not being interested in life and safety, DACA has now taken a big step backwards. The Dems will threaten “shutdown,” but what they are really doing is shutting down our military, at a time we need it most. Get smart, MAKE AMERICA GREAT AGAIN!

The language used by me at the DACA meeting was tough, but this was not the language used. What was really tough was the outlandish proposal made - a big setback for DACA!

Sadly, Democrats want to stop paying our troops and government workers in order to give a sweetheart deal, not a fair deal, for DACA. Take care of our Military, and our Country, FIRST!

Never said anything derogatory about Haitians other than Haiti is, obviously, a very poor and troubled country. Never said “take them out.” Made up by Dems. I have a wonderful relationship with Haitians. Probably should record future meetings - unfortunately, no trust!

On Thursday, Trump rejected a compromise immigration deal. The Washington Post reported that Trump said, "Why are we having all these people from s---hole countries come here?", referring to African countries and Haiti.

World reacts to Trump's comments
-- President Trump's complaints about immigrants coming to the U.S. from "s---hole countries" have prompted condemnation from around the world.

Democratic and Republican lawmakers criticized Trump's comments as "divisive" and "unacceptable," while Haiti, one of the countries explicitly named by Trump, summoned the top U.S. diplomat there to discuss the president's remarks.

The New York Times reported Sen. Dick Durbin (D-Ill.), who was at the Thursday meeting, said Trump "said these hate-filled things and he said them repeatedly."

"It shows a lack of respect and ignorance never seen before in the recent history of the US by any President," Lamothe tweeted.

Republican Congresswoman Barbara Comstock said, in a statement, that she could not defend the president's reported comments:

I can't defend what the President reportedly said. We are all made in the image and likeness of God... Full statement below. #VA10 pic.twitter.com/IM505XNkKn

The words used by the President, as related to me directly following the meeting by those in attendance, were not “tough,” they were abhorrent and repulsive.

Obama speaks on Russian involvement in 2016 election
-- In an interview with David Letterman, former President Barack Obama weighed in on the potential consequences of Russian meddling in social media platforms during the 2016 election.

"What the Russians exploited, but it was already here, is we are operating in completely different information universes," Obama told Letterman in the first episode of Letterman's new Netflix series "My Next Guest Needs No Introduction." "If you watch Fox News you are living on a different planet than you are if you listen to NPR."

The comment came after Letterman asked, "Let's just say there's a democracy and the voting process is being monkeyed with by foreign countries. ... Hypothetically, what is more damaging to that democracy: Would it be the diminishment by the head of democracy of press, or would it be somebody screwing around with the actual voting process?"

"One of the biggest challenges to our democracy is the degree to which we don't share a common baseline of facts," Obama said.

Trump tells WSJ: "I should get credit" for Comey firing
-- President Trump, in an interview with The Wall Street Journal, said he should be given credit for firing FBI Director James Comey "because it turned out I was right."

Trump also told the WSJ that since he fired him, "many things have been found out about Comey" and his ex-FBI director "has proven to be a leaker and a liar."

"The other thing is, everybody wanted Comey fired," Trump continued, the paper reported Thursday.