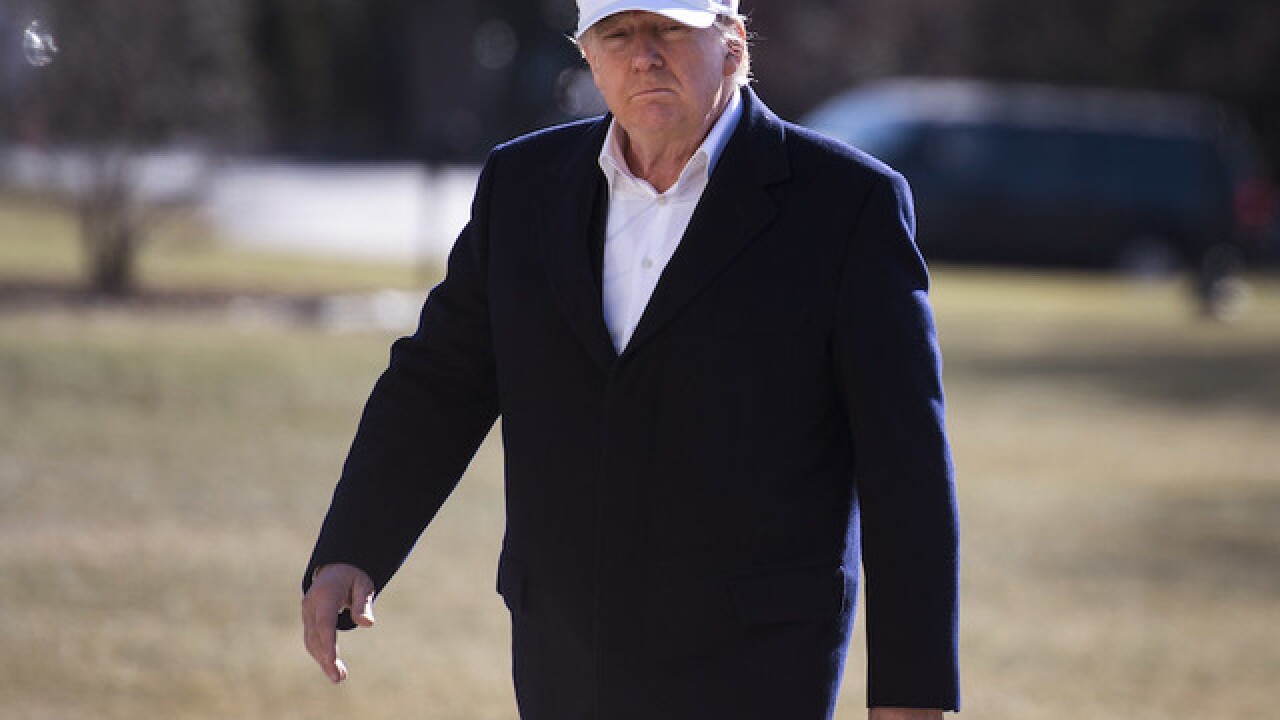 Image copyright 2018 Getty Images. All rights reserved. This material may not be published, broadcast, rewritten, or redistributed.
Pool
<p>WASHINGTON, DC - JANUARY 7: (AFP OUT) U.S. President Donald Trump returns to the White House following a weekend trip with Republican leadership and members of his cabinet at Camp David, on January 7, 2018 in Washington, D.C. (Photo by Kevin Dietsch-Pool/Getty Images)</p>

President Donald Trump on Friday denied describing certain nations as "s---hole countries" during a meeting in which he rejected a bipartisan deal on the Deferred Action for Childhood Arrivals program.

"The language used by me at the DACA meeting was tough, but this was not the language used. What was really tough was the outlandish proposal made - a big setback for DACA!" Trump tweeted.

White House spokesperson Raj Shah did not deny the "s---hole" remark on Thursday evening, but instead said in a statement that Trump "is fighting for permanent solutions that make our country stronger by welcoming those who can contribute to our society, grow our economy and assimilate into our great nation."

"I have seen the comments in the press, I have not read one of them that's inaccurate," Durbin told reporters in Chicago, according to USA Today.

"In the course of (Trump's) comments, he said things that were hate-filled, vile and racist. l use those words advisingly, I understand how powerful they are. I cannot believe that in the history of the White House and that Oval Office any president has ever spoken the words that I personally heard our president speak yesterday."

"I read those comments later last night, the first thing that came to my mind was very unfortunate, unhelpful," the Wisconsin Republican said at WisPolitics Luncheon in Milwaukee.

Ryan recalled his own family history of emigrating to the US from Ireland.

"So, I see this as a thing to celebrate," he said. "And I think it's a big part of our strength.

DACA protects hundreds of thousands of young undocumented immigrants brought to the US as children from deportation.

The anniversary of the devastating earthquake 8 years ago is a day to remember the tragedy, honor the resilient people of Haiti, & affirm America’s commitment to helping our neighbors. Instead, we‘re subjected to Trump’s ignorant, racist views of anyone who doesn’t look like him.

Trump on Thursday rejected a pitch from a bipartisan team of senators on a compromise immigration deal to protect DACA participants while increasing border security.

"Why do we want all these people from 'shithole countries' coming here?" Trump told senators in the Oval Office, according to a source briefed on the meeting. The Washington Post first reported on Trump's comments.

Trump's denial came among a series of other tweets in which he defended his immigration stance.

"The so-called bipartisan DACA deal presented yesterday to myself and a group of Republican Senators and Congressmen was a big step backwards. Wall was not properly funded, Chain & Lottery were made worse and USA would be forced to take large numbers of people from high crime.....," Trump tweeted.

He continued: "....countries which are doing badly. I want a merit based system of immigration and people who will help take our country to the next level. I want safety and security for our people. I want to stop the massive inflow of drugs. I want to fund our military, not do a Dem defund....

"....Because of the Democrats not being interested in life and safety, DACA has now taken a big step backwards. The Dems will threaten 'shutdown,' but what they are really doing is shutting down our military, at a time we need it most. Get smart, MAKE AMERICA GREAT AGAIN!"

He also said: "Sadly, Democrats want to stop paying our troops and government workers in order to give a sweetheart deal, not a fair deal, for DACA. Take care of our Military, and our Country, FIRST!"

The tweets suggest that Trump is interested in a system that would only accept individuals from certain countries and backgrounds in exchange for a DACA deal -- as well as a much more substantial border investment than one year of funding and technology upgrades the lawmakers had presented.

Democrats have made clear they would not consider some of the suggestions and the demands risk exacerbating already tense talks as both sides are entrenched in negotiating position.

While some Republicans hope to gain leverage by dragging out negotiations and increase the risk that DACA recipients could lose status and even be deported, advocates have made clear to Democrats they should feel empowered to reject a deal that benefits DACA immigrants at the expense of scores of others and their families.