According to police, the shooting happened near A Street and 1st Avenue near City Hall around 11 a.m.

During a news conference Sunday, San Diego police said the suspect, identified as 58-year-old Mona Elease Williams, may have been involved in a kidnapping in Chula Vista just before the events in downtown unfolded. The man who was reportedly kidnapped was able to escape and call the police.

"During the initial part of the investigation, the Chula Vista kidnapping suspect was believed to be possibly involved in the shooting incident that took place in downtown San Diego. The suspect in the kidnapping incident had a similar physical description and vehicle as the suspect involved in the downtown San Diego incident," said Chula Vista Police Department Lt. Dan Peak.

Chula Vista police later confirmed that the downtown shooting suspect was not connected to an attempted kidnapping in their city. CVPD said the suspect in their case had the same last name as the downtown San Diego suspect.

Before the shooting took place, Williams was involved in a hit-and-run crash along West A Street and Kettner Boulevard, according to police. The victim in the crash called 911 and reported the incident.

Shortly after making that call, the victim flagged down a police sergeant and pointed out Williams' vehicle. The sergeant followed the white Honda to the City Concourse Parking Garage.

While waiting to enter the parking garage, Williams pointed a gun, later identified as an airsoft gun, at an officer before driving into the structure. Police said she drove to the roof of the garage, got out of the car and threw her gun off the roof before being taken into custody.

At some point during the chase, officers fired at least one shot at Williams but missed. San Diego Police Chief David Nisleit confirmed that an officer accidentally shot himself in the leg during the active shooting situation. The officer underwent surgery and is expected to be OK.

MAP: Here's what we know about where an active shooter-situation unfolded downtown

A San Diego police spokesperson said Sunday night that Williams will be booked on resisting arrest. Any additional charges will be filed by the district attorney.

Runners participating in the marathon say they were rerouted near the finish line due to the shooting. Officials later said approximately 27,000 people attended the marathon.

Watch the police news conference in the player below:

Check the map below for the route of the marathon: 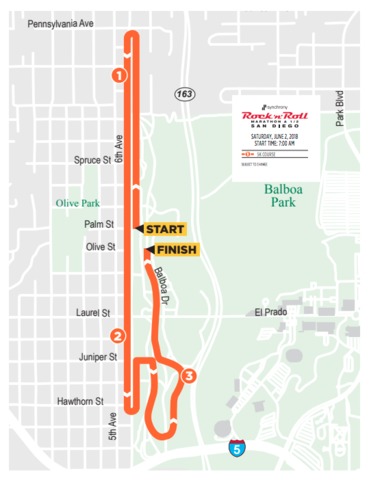 “At 11:43 a.m. PT, race officials were made aware of a situation that required the 2018 Rock ‘n’ Roll San Diego Marathon & 1/2 Marathon to be stopped. The situation involving an active shooter who was engaged with local law enforcement was not related to today’s race. Officials in conjunction with first responders activated their critical incident protocol. By 11:45 a.m., the course was shut down and approximately 4,900 athletes were rerouted into a designated safe zone. While the race was officially stopped, law enforcement gave the clearance at 11:56 a.m. PT for runners to resume their progress towards the finish line and the post-race finish area where they were able to meet up with their family and friends. We are incredibly grateful for the quick response and partnership with first responders as we worked together to keep our athletes safe. We will be following up with additional communication to athletes who were impacted by the race stoppage.”

“The Padres have been in close contact with the San Diego Police Department following today’s incident downtown. We have been assured that the situation was contained and the streets are secure. SDPD has confirmed that it is safe for us to proceed with today’s Little League parade, as well as our 3:10pm game at Petco Park.”