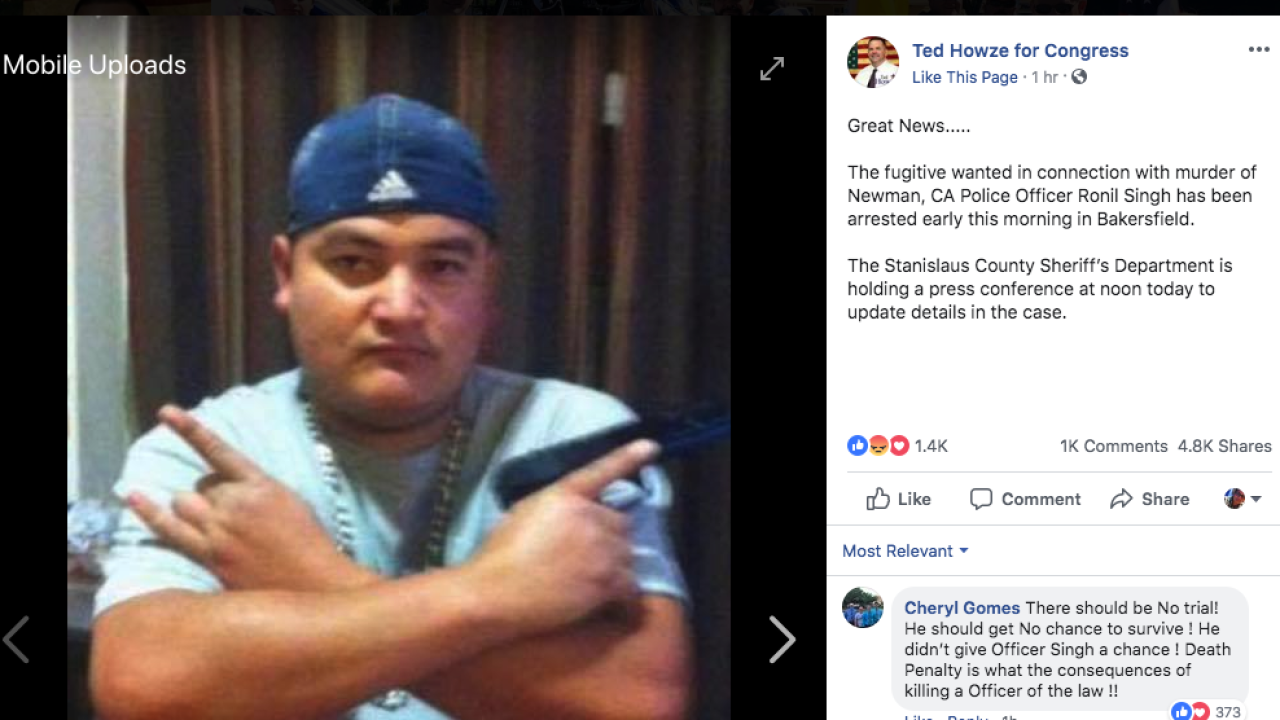 SAN FRANCISCO (AP) — A man suspected of gunning down a California policeman was in the U.S. illegally and was captured while planning to flee to his native Mexico, a sheriff announced as he all but blamed the state's sanctuary law for the officer's death.

A two-day statewide manhunt ended Friday with the arrest of Gustavo Perez Arriaga, who came out with his hands up as a SWAT team prepared to raid a home in Bakersfield, California. That was about 200 miles (320 kilometers) southeast of where Cpl. Ronil Singh was shot before dawn Wednesday.

Singh had stopped a suspected drunken driver in the town of Newman when he was fatally wounded and managed to fire back but didn't hit his attacker, authorities have said.

"We can't ignore the fact that this could have been preventable," Christianson told reporters, asking why the state was "providing sanctuary for criminals (and) gang members. It's a conversation we need to have."

Christianson called for stricter laws at a news conference as Singh's brother wept beside him.

Perez Arriaga crossed the border in Arizona several years ago and had worked a variety of jobs as a laborer, including at several dairies. The 33-year-old had gang affiliations and multiple Facebook pages with different names, Christianson said.

The shooting came amid an intense political fight over immigration, with President Donald Trump and congressional Democrats at odds over funding for a border wall that has forced a partial government shutdown.

Trump tweeted about Singh's killing Thursday, saying it was "time to get tough on Border Security. Build the Wall!"

California's sanctuary law limits cooperation between local authorities and U.S. immigration officials and has drawn scorn from the Trump administration. It includes more than 800 exceptions for violent crimes and felonies and bars police from asking people about their citizenship status.

There is right now a full scale manhunt going on in California for an illegal immigrant accused of shooting and killing a police officer during a traffic stop. Time to get tough on Border Security. Build the Wall!

Gov. Jerry Brown has said the law strikes a balance between protecting families and ensuring consequences for serious criminals. His spokesman said Friday that if the suspect was a known gang member, police could have provided that information to federal authorities.

A federal judge upheld the law earlier this year after a challenge by the Trump administration.

Former state Sen. Kevin de Leon, the Democrat who wrote the legislation, said it's unfair to blame the law for the officer's death.

Christianson, who was at a meeting with Trump and slams California's law in a video posted by the White House in May, said the measure prohibited his department from sharing Perez Arriaga's gang ties, "other active warrants" and past DUI arrests with federal immigration authorities. He didn't give details on the other warrants.

"He should've been in the physical custody of law enforcement," de Leon said. To blame the law "is highly irresponsible."

RELATED: Sheriff: California officer's killer is in the US illegally

"The type of tone and attitude that Sheriff Christianson has taken instills fear and panic in all immigrant communities" that could make people afraid to report crimes, de Leon said.

Authorities also arrested five other people, including Perez Arriaga's brother, 25-year-old Adrian Virgen, and a co-worker, 27-year-old Erik Razo Quiroz, who lied to police to try to protect him, Christianson said. Both men also were in the country illegally, he said.

Three people also were arrested at the home near Bakersfield for helping Perez Arriaga, Youngblood said.

The 33-year-old officer was an immigrant, too, arriving legally from his native Fiji to fulfill his dream of becoming a police officer, authorities said. Singh had a newborn son and joined the 12-officer Newman police force in 2011.

Residents, friends, relatives and fellow officers held back tears as they eulogized Singh during the candlelight memorial.