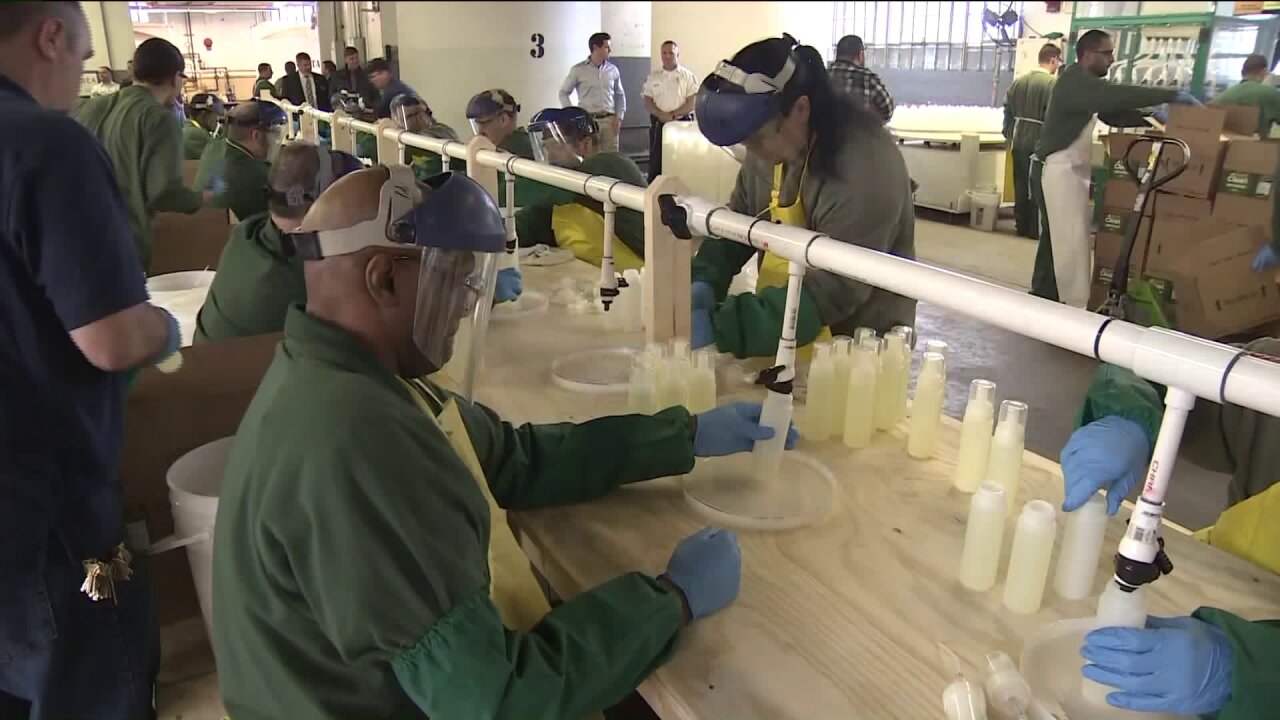 Inmates making hand sanitizer in New York amid a shortage

Amid a hand sanitizer shortage in New York, Gov. Andrew Cuomo’s news conference on the new coronavirus began with a little stagecraft.

In a scene that resembled something out of a TV game show, the governor revealed New York state-made hand sanitizer by asking that a curtain be opened beside him. It revealed dozens of containers of hand sanitizer. The governor said New York’s product, made by Corcraft , was superior to commercial sanitizer because it contains more sanitizing alcohol, 75% in comparison to 60%.

The governor boasted that New York state sanitizer is much less expensive than the commercial store-bought product:

What the governor never said was that Corcraft is a “brand name” for product made by the Division of Correctional Industries. In other words, the hand sanitizer is made by New York state prison inmates.

The New York Department of Corrections and Community Supervision tells WPIX that on average, a state prison inmate earns 52 cents an hour for labor.

"It’s much cheaper for us to make it ourselves than for us to buy it on the open market," Cuomo said.

The product, called NYS Clean, will be distributed to municipalities, schools and governmental agencies in New York. The current capacity is to make 100,000 gallons a week.

Cuomo praised it’s “floral bouquet” and he warned Purell, Amazon and eBay that if they permitted price gouging on the in-demand product then, New York would introduce its sanitzer into the marketplace. His office later clarified that he was kidding when he said the product might be introduced into the marketplace. The sanitizer states on its label that it is “not intended for sale.”

Sen. Zellnor Myrie, who sponsored a bill to raise the hourly wage for inmates, said he was happy the state was stepping in to prevent price gouging, but noted that he had some problems with the plan.

"I am deeply concerned, however, that Corcraft, who already enjoys preferred vendor status with the state to the tune of $52 million a year, is being given this responsibility while they continue to the pay incarcerated New Yorkers cents an hour," Sen. Myrie said. "Hand sanitizer shouldn't cost $50 and workers correcting that injustice shouldn't be paid 50 cents an hour. We can change that right now if we desired. Let's get it done."

The inmates producing it are not allowed to use hand sanitizer. The alcohol content means that it's contraband, public defender Scott Hechinger tweeted.

"Can’t use it. Loved ones can’t send it," he tweeted. "But those same people incarcerated by NY are getting paid 65 cents per hour to manufacture it!"

Public defenders across New York are concerned about the impacts of COVID-19 on local jails. The Legal Aid Society said people confined in jails and prisons during outbreaks are particularly vulnerable.

"Unlike people in free society, incarcerated people have no access to water or soap for hand washing, or capacity to seek physical distance, except with the overt assistance of their jailers," the Legal Aid Society said in a statement.

This story was originally published by Allen Levine and Aliza Chasan at WPIX.